Ahead of Queen Elizabeth II's funeral here on Monday, my Hong Kong-born wife insisted that we should make our way to the British Consulate Sunday night to leave flowers. And we did, joining dozens of people milling around outside as a projector displayed a couple postage-stamp-style images of Elizabeth on the wall of the consulate: Young Queen, Old Queen, Young Queen facing Old Queen ... 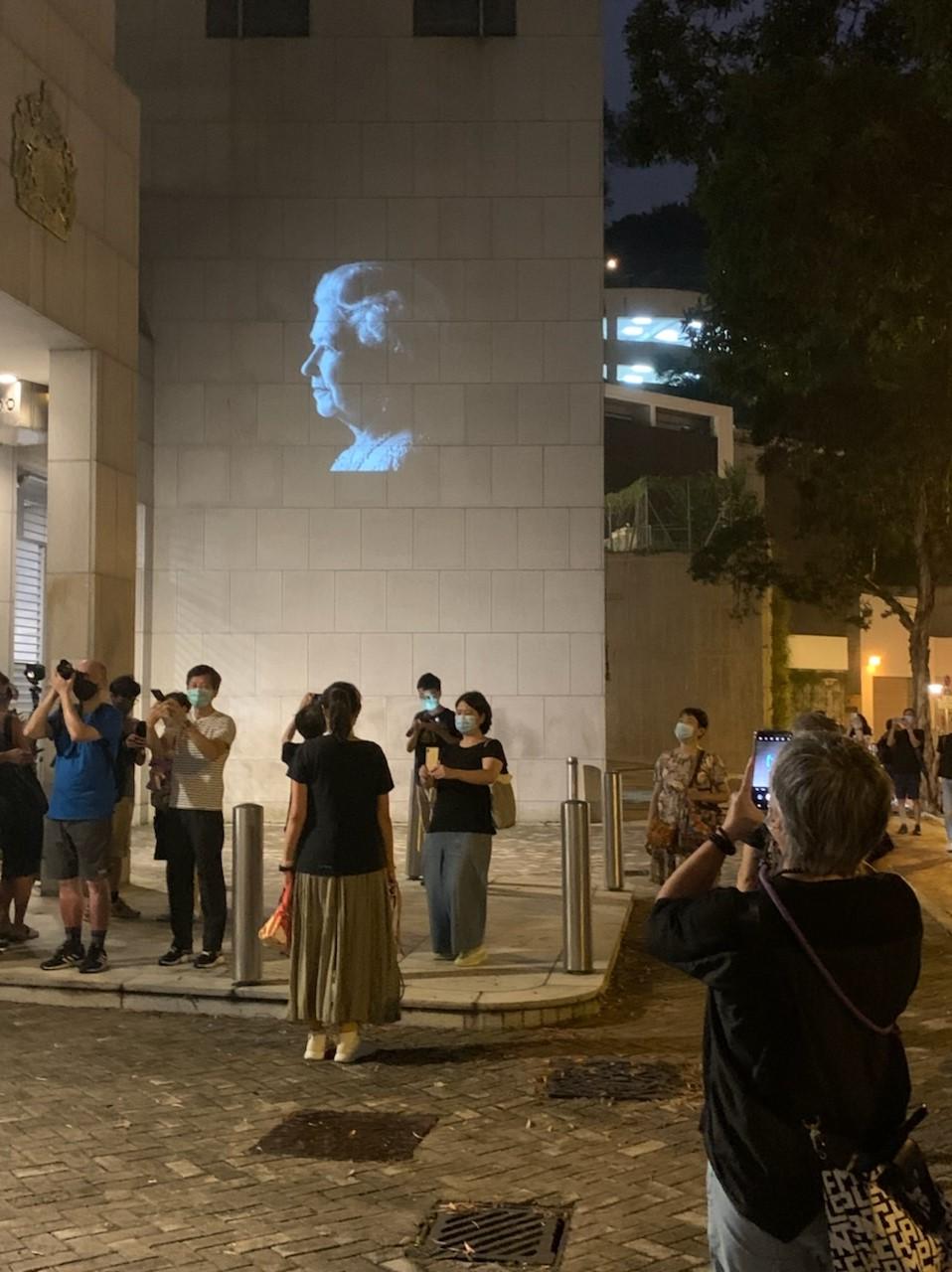 I'm a British citizen, but I haven't lived in Britain for more than 30 years. "Would you call yourself proud to be British?" my wife asked. I took my time responding. "Yes, but ..."

I like a lot of things about being British -- the ease of travel with the passport, for one, and I'll always have a very British soft spot for sausages and biscuits -- but I'm not patriotic for the sake of being patriotic. The British Empire, like the Church of England that the British monarch also heads, has been responsible for woe as much as it is welcome around the world. My father is South African, and we only need to look at what went on there under apartheid for an example of the evils the empire can bring.

So it's intriguing to see Hong Kongers so compelled to head to the characterless concrete tower at 1 Supreme Court Road and leave a little memorial to the queen. I wouldn't have gone without my wife's prompting. Yet thousands of Hong Kongers waited in long lines -- the British national sport is queuing as much as it is soccer -- in baking sun and 80% humidity to sign a condolences book inside the British consulate. The consulate was closed on Sunday when we visited, but the wide bank of bouquets amassed outside, many with handwritten notes attached, stood testament to how many more Hong Kongers had quietly left their remembrances. 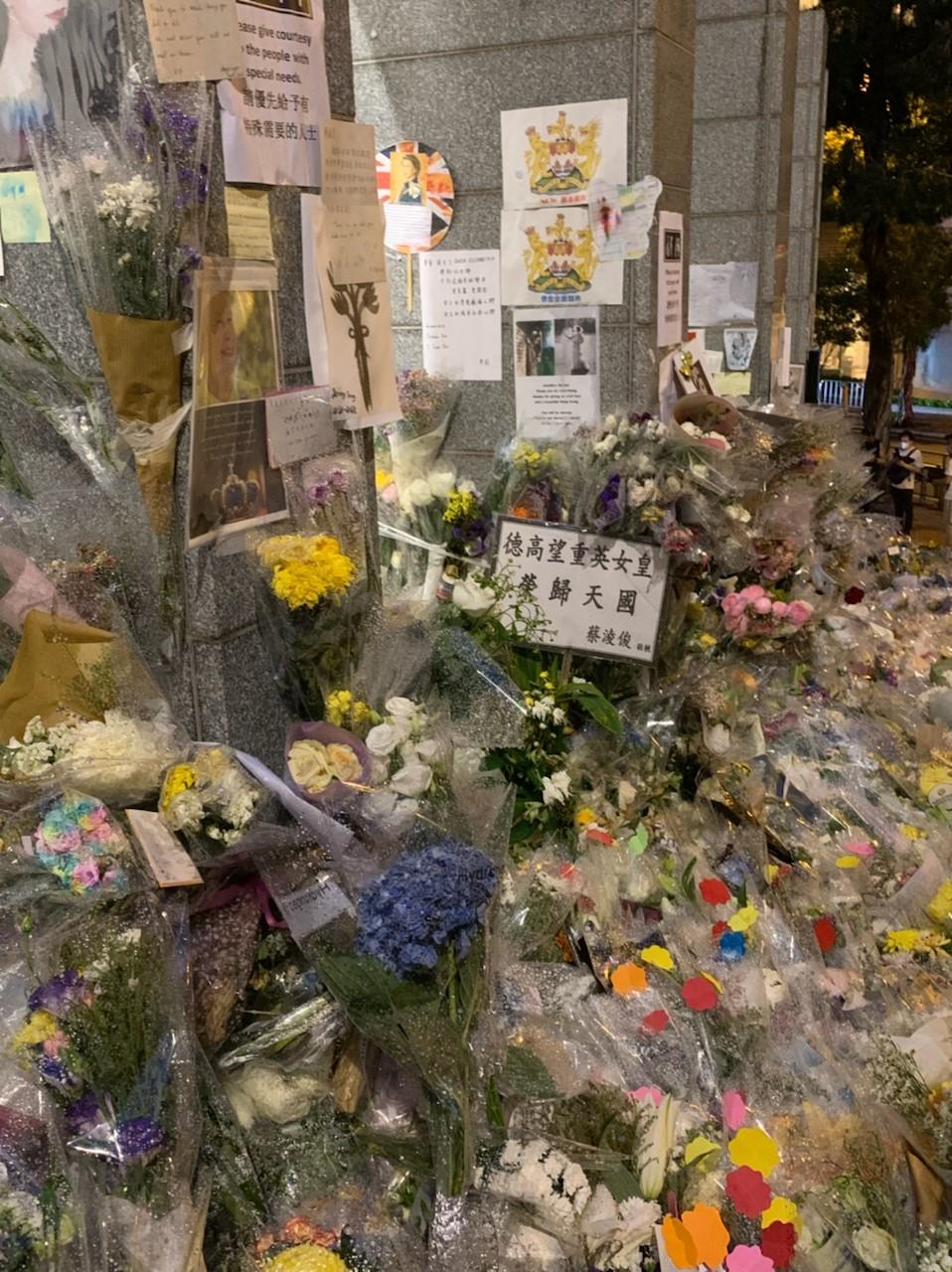 One of the late queen's legacies, I believe, was her decision to remain silent in public on matters of opinion. She met countless scores of people but said little more than "Hellos" and "What do you do?" To this day, we know little about her personal beliefs on the big Issues of her time: climate change, or Brexit, or "the troubles" in Northern Ireland. Mining strikes, poll-tax riots, race riots, acid rain, AIDS, football hooliganism, skinheads, youth unemployment, people trafficking, knife crime, the jobless rate, inflation ... you name it. We don't know what she thought about it.

She was a cypher. Because she said so little -- publicly at least, though apparently she was more forthcoming in her weekly private chats with the prime minister -- we could read whatever we wanted into her. What does the Queen mean to you? She means whatever you want her to mean. In that sense, being British can mean whatever you want it to mean, too.

Sad about a memory

Hong Kongers are not so sad for the death of empire. There were riots here in the 1960s, sparked by an increase in a ferry fare, and bombings planted by Communist separatists as mainland China went through the throes of the Cultural Revolution next door. For all our current cries for democracy, there was never much political representation for Hong Kongers while the Brits ruled the town through a succession of Crown-appointed governors.

Hong Kongers are sad for the death of the city they knew. Interference by the Chinese Communist Party has intensified since the British handed it back to China in 1997. It has been particularly intrusive under the last three leaders of the city, now known as chief executives. This bastion of laissez-faire capitalism is now very much under the iron fist of the Beijing government, which has beaten the city down and left most Hong Kongers feeling bruised.

They are sad for what the city used to be. The notes I read outside the consulate all talked of days gone by. "You were a very special person not just for this tiny place but also for the Commonwealth," Jonathan Leung writes in one of the few signed notes. "You set the foundations for us and nurtured us. You left us with the memories and precious legacy."

I found another, unsigned note left beneath a mockup of a 1960s stamp quite touching. "When I was little, to me, you were just the head behind the coins or the pictures on TV when the channel finished for the day. However, gradually, you earned an important place in my heart," it reads. "You touched millions of hearts by what you said and what you did. You set the best example for all of us on how a leader should be like. I miss your smile, your funny moments, your comments, and your unique fashion sense."

So Hong Kongers are mourning not just the queen but the passing of the Hong Kong of their youth. They are mourning Hong Kong, with just about the only form of political protest now allowed. No more than four people can gather for a protest under current rules -- while eight can get together to share a meal -- and in any case, anyone protesting for democracy or against Chinese Communist Party rule won't get a permit, but will be arrested instead for their pains. Leaving flowers, perhaps bearing a yellow ribbon that can symbolize both royalty and democracy, while wearing the kind of black T-shirt that became a uniform during 2019 pro-democracy protests, is a quiet, personal way to mark your affiliation with Another Hong Kong.

Was Hong Kong ever British? Not if you ask the current Beijing leadership or read the new textbooks on their way to being approved here. They assert that Hong Kong was never a British colony and that the British were simply a hostile occupying power.

But yes, China ceded Hong Kong to Britain "in perpetuity." The Sino-British Joint Declaration signed in 1984 to hand Hong Kong back, agreed to both by Beijing and London, makes it clear there was a transfer of sovereignty back, as you can see in the first clauses here.

So Hong Kong was a British colony from 1841 through 1997, cherished at first as a deep-water port in the middle of East Asia. British Royal Navy Captain Charles Elliot secured it in a treaty to end the First Opium War, knowing how useful Hong Kong island would be as a base for marine trade and naval traffic. But his boss, then-Foreign Secretary Lord Palmerston, was furious that Elliot had secured nothing more than a "barren rock" with scarcely a house on it that "will never be a mart for trade" and dismissed Elliot from his post.

Elliot, later consul general to the Republic of Texas as well as governor to both Bermuda and then Trinidad, was of course proved right. Hong Kong thrived as a British colony, first based on trade between Guangdong Province and the rest of the world and then as a manufacturing base. It was in its heyday in the 1980s and 1990s, and fortunes have long been amassed by compradors who served as middlemen for sourcing in and selling to China.

My wife acknowledged later last night that she's really mourning and missing the Hong Kong that she remembers when she was young, during those heady years of success in the '80s and '90s. Hong Kongers who wouldn't have rushed to the defense of the British Empire nonetheless regret the loss of days gone by. 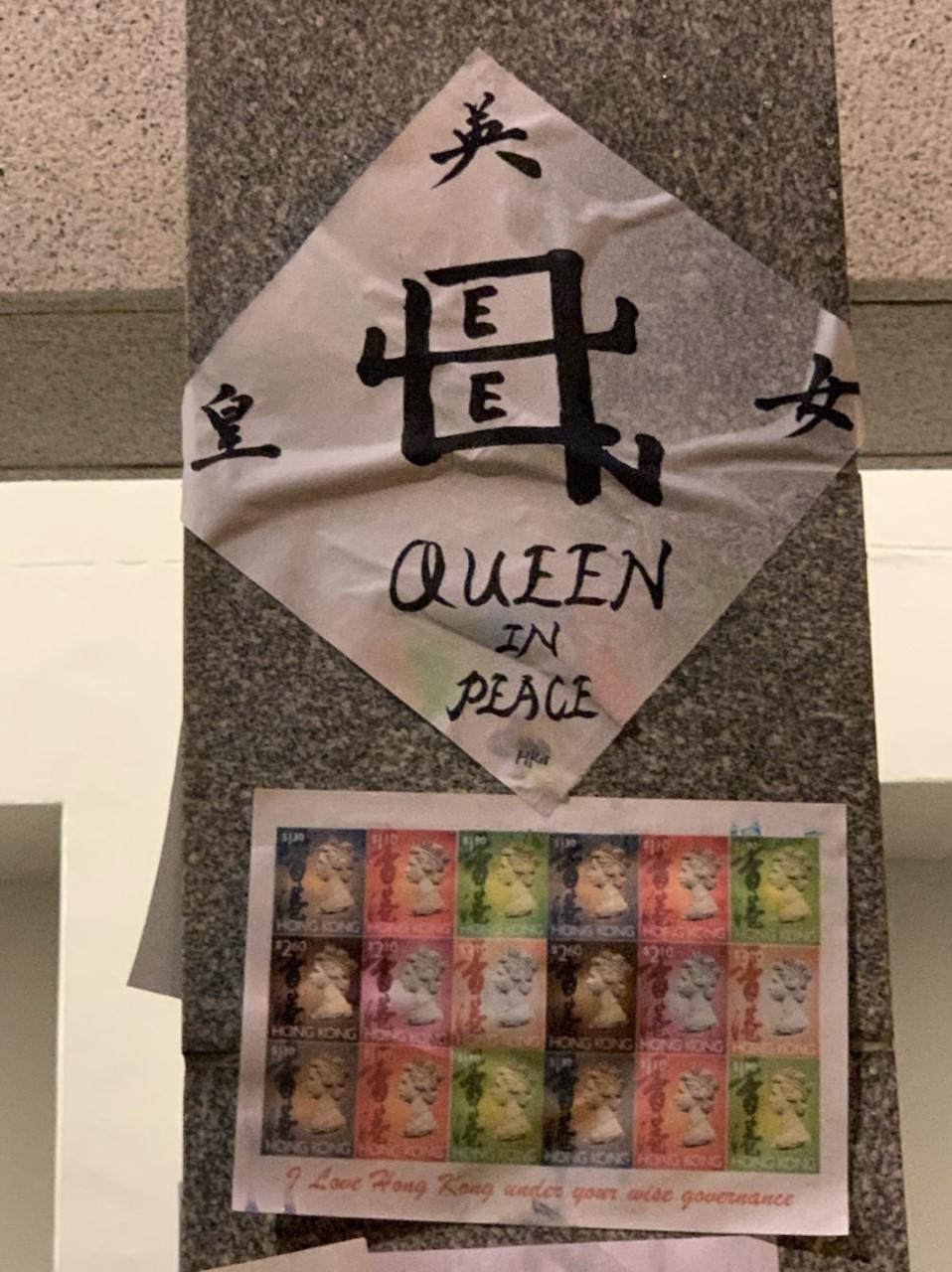 We had come to the British consulate from the newly opened M+ art museum in West Kowloon. It has a decent collection of modern Chinese art, with a particular treasure trove donated by Uli Sigg, the former Swiss ambassador to Beijing, who arrived as an executive in China in the 1970s and built up a collection of 2,300 works.

The museum avoids direct mention of matters such as the Tiananmen Square massacre in 1989 or direct criticism of the current regime. But there are plenty of political works on display.

Two photos caught my eye. They were taken in 1997, the year of the handover, by the Xiamen-born artist Huang Yong Ping, a notorious provocateur. The two photos are called BBE July 1997 and depict a bottle of British-made mayonnaise with 07 1997 as a sell-by or "Best Before End" date.

The caption to the art reads:

"These photographs show British packaged foods stamped with the text 'Best before 1 July 1997'. The date corresponds with the end of British rule in Hong Kong. Huang Yong Ping asks what it means to carry the legacy of colonialism."

Get an email alert each time I write an article for Real Money. Click the "+Follow" next to my byline to this article.
TAGS: Politics | Asia | China

Dual forces have combined to create a world in which hydrocarbons are in short supply, which makes the price of everything else rise.

Don't Look Now, but 2022 Is Shaping Up for an Ugly Finish

A slowing economy, a weakening job market and the likelihood of political gridlock will take their toll on stocks.

It will be Xi's first trip outside China in almost 1,000 days.