By STEPHEN GUILFOYLE Jun 28, 2022 | 07:23 AM EDT
Stocks quotes in this article: SNX, AVAV, LMT, RTX, NOC, XLE, BROS, CVX, PFE, BNTX, MRNA, NVAX
U.S. equity index futures and global equities caught a minor bid overnight as China appeared to relax, just a wee bit, its Covid-restriction rules for outsiders visiting the country. Those visiting China will now need to quarantine inside a government-run facility for seven days once entering China and then monitor their health on their own in isolation for another three days once leaving that facility prior to functioning in public, according to new protocols released by the National Health Commission on Tuesday (this) morning.
While this time spent at an official quarantine facility has been halved from 14 days, government officials made sure that the press did not misconstrued this as a message that China was easing up despite the fact that most of the rest of the world has started to figure out ways to live alongside the virus by now. Lei Zhenglong, who is an official with the National Health Commission, said "It's absolutely not loosening up, but a more scientific and targeted approach."

While the G-7 and NATO try to figure out what to do about the Russian war machine, and secure member nations most exposed or most vulnerable, NATO and friends officially go into their summit this morning in Madrid. The NATO military alliance appears to be putting together a "Strategic Concept" document for the first time since 2010.
The group will likely label China a "systemic challenge" while highlighting concerns over cybersecurity and disinformation. This is the "why" behind the inclusion of Asia-Pacific nations such as Australia, New Zealand, Japan, and South Korea in Madrid despite those friendly nations not necessarily being part of the alliance.
The previous document made no mention of China at all. The revised strategic concept document will also focus on Beijing's deepening partnership and support for Moscow. The 2010 version had referred to Russia as a partner. That language will obviously have to change.

There have been a plethora of multi-million dollar awards made by the Pentagon and its internal agencies since last week. These are just the ones that start with or will end with a "B."
On Monday, the Sikorsky Aircraft unit of Lockheed Martin ( LMT) was awarded a $2.278B U.S. Army firm fixed-price contract for the procurement of 120 H-60M Black Hawk helicopters and related support for fiscal years 2022 through 2026. The package includes an option for 135 additional Black Hawks.
Last Friday, Raytheon Technologies ( RTX) and Northrop Grumman ( NOC) won contracts to continue developing missiles to intercept hypersonic weapons. Lockheed was eliminated from the "defensive" weapons program for the time being, but could be pulled back in at some later date. In November, the three companies were awarded about $60M to develop an interceptor to be guided by a constellation of satellites as China and Russia have focused on and taken a lead in the development of offensive hypersonic weapons.
The Missile Defense Agency has now awarded up to $62M to Raytheon and up to $60M to Northrop for each of these two contractors to continue work on perfecting their interceptors. A recent Government Accountability Office report shows the estimated cost for an interceptor system could range from $3.7B to $4.2B with accelerated funding, as these weapons were needed "the day before yesterday" in military parlance. Russia has already used offensive hypersonic weapons in combat and China has successfully tested theirs. We currently have nothing that can shoot them down. Nor does anyone else.

On Friday, a number of U.S. equity market indexes posted their strongest day in a couple of years on what ended up being the third heaviest traded day in U.S. stock market history. Some count that as a break-out day, and now look for a day of confirmation. While I would indeed count this as the market's attempt to build anything from a tradeable bottom to something more sustainable if confirmation did appear, I would caution against relying too much upon volume-based indicators when trading volume is supported through any kind of forced activity. That would include last Friday's Russell Rebalancing and this Thursday's end of month/quarter/half activity. Not that we can't trust the action, but we won't know if we can trust the action until afterward. Treat it as "subject."
Monday was the slowest trading day in anywhere from two weeks to three weeks, depending on the metric followed. The Nasdaq twins (the Composite and the 100) led markets lower, giving up 0.72% and 0.81%, respectively, as the S&P SmallCap 600 ran the other way (+0.79%).
Literally every other index that I follow closely stayed within a half of one percentage point from Friday's closing level. The S&P 500 spit up just 0.3%.
Trading volume dropped 47.3% on Monday from Friday for NYSE-listed names, as winners narrowly edged losers and advancing volume took a 53.4% share of that depressed total. Volume took a 47.6% day-over-day nosedive for Nasdaq listings, as losers beat winners by just a smidge, and advancing volume took a 48.1% share of the activity.
Only three of the 11 S&P sector-select SPDR ETFs managed to shade green on Monday, led by none other than the Energy ( XLE) sector, which was up 2.93% for the session.
I did not trade a lot on Monday other than taking a small profit in Dutch Bros ( BROS) from a trade made late last week as well as some inconsequential day-trading. One thing I did do was increase my long position in Chevron ( CVX) ahead of Monday's opening bell. While I did take some profits on the "overweight" portion of this core position, I have not returned the name to core size and may not. This is a "watcher" for now. Not sure if CVX has to test its 200-day simple moving average (SMA) or if last Thursday's action came close enough. 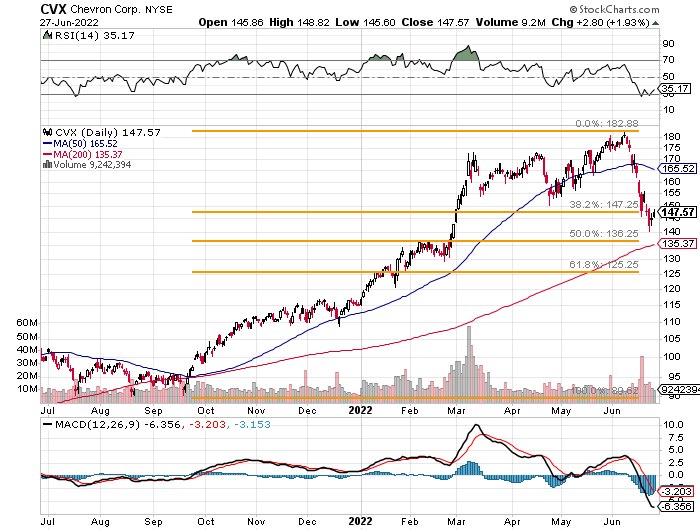 Readers will note that the 200-day SMA for CVX runs within a dollar of a 50% retracement of the stock's September through early June run. One would think that support lives around here. I know, "don't think."

Anyone else watch the U.S. Treasury Department try to go to market with $47B worth of 5-Year paper on Monday? Or $46B worth of 2-Year Notes? Whoa.
The 5-Year auction went off at a high yield of 3.271%, which tailed the when issued at the time quite badly. Dealers were left with a whopping 23.8% of the issuance as Indirect bidders disappeared. Foreign accounts took down a well below average 56.5% of the auction, down from an already weak 62.9% in May. Silver lining? Direct bidders held steady from last month at 19.7%.
The entire yield curve has been pushed out since bottoming (peaking for prices) early last Thursday. This morning, I see that 5-Year Note trading at a yield of 3.289%, which along with the 3-Year and 7-Year Notes, is still inverted against the 10-Year Note that currently pays 3.236%.

There was a time when Covid-related vaccine news was headline material. Not now, though, and if some experts are correct, this news could matter.
The Vaccines and Related Biologics Advisory Committee (a panel that advises the FDA) meets today (Tuesday) and the outcome likely will determine the composition of Covid booster shots ahead of the autumn season, which is when many expect Covid to reassert itself as a negative impact on daily life.
You know the lineup. Pfizer ( PFE) /BioNTech ( BNTX) , Moderna ( MRNA) and Novavax ( NVAX) have all been working on and developing Omicron variant-specific vaccines. Booster shots from these companies are expected to be bivalent, as to include protection against both the Omicon sub-variants as well as the original SARS-CoV-2 coronavirus.
FDA scientists have noted that a Moderna study showed that its bivalent vaccine provided a better antibody response against the variants currently in circulation compared to its original vaccine. Supposedly, it can also be shown that a Pfizer/BioNTech Omicron-specific vaccine provided a superior antibody response against Omicron while providing similar effectiveness against the original strain of Covid.
This is hopefully the part of the pandemic where the virus becomes more like the flu as preventing it becomes more like preventing the flu.

Before the Open: ( SNX) (2.65)
After the Close: ( AVAV) (0.40)
(Energy Select Sector SPDR Fund is a holding in the Action Alerts PLUS member club . Want to be alerted before AAP buys or sells XLE? Learn more now. )
Get an email alert each time I write an article for Real Money. Click the "+Follow" next to my byline to this article.
TAGS: Bonds | ETFs | Federal Reserve | Futures | Indexes | Investing | Markets | Stocks | Trading | Treasury Bonds | China | Europe | U.S. Equity | Coronavirus