By STEPHEN GUILFOYLE May 03, 2022 | 07:36 AM EDT
Stocks quotes in this article: BIIB, BP, DD, EL, PARA, AMD, ABNB, LTHM, LYFT, MATX, SWKS, SBUX, XLC, PINS, SPOT, FB, XLE, XLK, ON, NVDA, GS, BAX
Ebb and flow? Not quite.
The intensity of the undertow was almost shocking, pulling anything and everything out toward the great blue expanse. Margin calls went out. Again. Hitting all who weren't hit on Friday. Hundreds of feet of wet sand, now visible for the first time in a very long time (since 2020).
Then it happened. What happened?
The shift, almost on a dime. Suddenly, the tide, now raised well above sea level, was moving with both velocity and ferocity... recovering that newly revealed wet sand and then some.
Ahh, a little short covering? Perhaps.

I'll tip my hat to the new constitution
Take a bow for the new revolution
Smile and grin at the change all around
Pick up my guitar and play
Just like yesterday
Then I'll get on my knees and pray
We don't get fooled again
-- Peter Townsend (The Who), 1971

We went over this yesterday (Monday morning). At some point, there will be an aggressive rally. Check. For Monday's bullish reversal to be established as a change in trend, there now needs to be confirmation.
Oh yeah, on Monday, the U.S. 10-Year Note yielded 3% for the first time since late 2018, and nearly twice what the U.S. benchmark paid late last year. This level has not broken and has served as support for 10-Year throughout Monday afternoon into the overnight, and on through Tuesday's wee hours.
So we know what the catalyst was for the volatility. It seems feasible that the action might have been forced in the way that margin call liquidation followed by short coverings might be, as both serve to cut risk, or reduce exposure. Algorithms designed to force directional overshoot (or create marketplace inefficiency) took care of the rest.
Don't get fooled again. Traders will recall that we've done this before. In late February, but also more recently, on April 19 and April 25. The reversal on the 25th was indeed followed by what looks like confirmation on the 28th. Yet the trading volume was not exactly convincing. Hence, ultimate failure. So, we try again? So soon? Hey, I don't set the table. I just work here.
There is enough of a setup here to expect either potential confirmation of Monday's reversal later this week, or one more brilliant failure. With the FOMC set to provide a policy statement on Wednesday afternoon, it is all but assured that Tuesday trading volume will be on the light side.
Late Wednesday, trading volume will soar as Fed Chair Jerome Powell takes his dog and pony show to the financial media. There are no Fed speakers on my radar for Thursday, as custom often allows for (but does not demand) a "quiet" day post press conference. At that point, the torrent of Fed speakers usually hit the circuit, usually to make sure that "we" got "the message" on Wednesday. This Friday, which is also April "Jobs Day," I already have at least four Fed speakers on my radar.
Markets will either confirm or deny Monday's bullish reversal this week. That's for investors. Traders are already up to their eyeballs in water snakes and alligators.

On top of a 10-Year Note that stuck to 3%, and WTI Crude that traded with both a $100 handle as well as a $105 handle within a couple of hours on Monday afternoon, it was U.S. equities that stole the show. The S&P 500 had been down 1.7%, the Nasdaq Composite down 1.1%. It was as if someone rang a bell with about 75 minutes left in the regular trading session. The S&P 500 would close up 0.57%, the Nasdaq Composite up 1.63%. The rally was quite broad, as the S&P MidCap 400 tacked on 0.6%, the Russell 2000 added 1.01%, and the Nasdaq 100 ruled the day at +1.72%.
Six of the 11 S&P sector-select SPDR ETFs shaded green to the day. Bargain hunters snapped up "growthy" types stocks as Communications Services ( XLC) led the way, up 2.76%. That group was led itself by internet stocks Pinterest ( PINS) , Spotify ( SPOT) , and Meta Platforms ( FB) .
With Energy ( XLE) placing second on the day's sector performance tables, Technology ( XLK) placed third, up 1.52%. The Philadelphia Semiconductor Index soared 3.51%, leading tech. The semis were led by ON Semiconductor ( ON) , Nvidia ( NVDA) , and Advanced Micro Devices ( AMD) , all three gaining more than 5% on Monday. FYI: AMD reports tonight.
Interestingly, places eight through 11 on Monday's sector performance tables were indeed the four sectors considered to be "defensive" in nature. Just like that.
Breadth was oddly split on Monday. Losers beat winners at the NYSE by roughly 9 to 7, but advancing volume comprised 56.5% of composite NYSE trade as aggregate trading volume for NYSE-listed names more or less moved sideways on Monday from Friday. However, while yellow lights were flashing at 11 Wall Street, it was "green light go" up at Times Square. Winners beat losers at the Nasdaq by weird looking 11 to 8, as advancing volume took a 71.6% share of composite Nasdaq trade, and aggregate Nasdaq-listed trading volume added significantly on Monday to Friday's total.
More food for this week's potential "pass/fail" tech/growth setup.

Goldman Sachs ( GS) reported their first quarter back on April 14. The company reported $7.9B in trading revenue over the first three months of the year. That's 61% of Goldman's company-wide revenue for that period. According to Bloomberg News, Goldman cracked the $100M mark in trading division revenue on an incredible 32 days over the three months, making Q1 2022 the best-performing quarter for GS traders since 2011.
I read the article at Bloomberg in awe, wondering how much of this trading revenue was actual human decision making and how much was algorithmic. Then, I stopped. Duh. The first quarter ended in March. I had one of the best months of my long career in March. April? Maybe we just don't talk about April until the quarter is done. Wonder how Goldman traders did in April? Finding out how they did when the going got tough will be far more interesting and enlightening than finding out that they excelled when nearly everyone else also did pretty darned well.

Aside from the "ebb and flow" of trading that can have an individual moving in and out of the same securities several times a week or even day (which is safer in volatile times than actual investing), I decided to initiate a name I'm not really in love with on Monday.
I speak of health-care equipment company Baxter International  ( BAX) . Baxter reported last week, posting adjusted EPS and revenue generation that beat Wall Street expectations, as those revenues were good for growth of 25.8%. 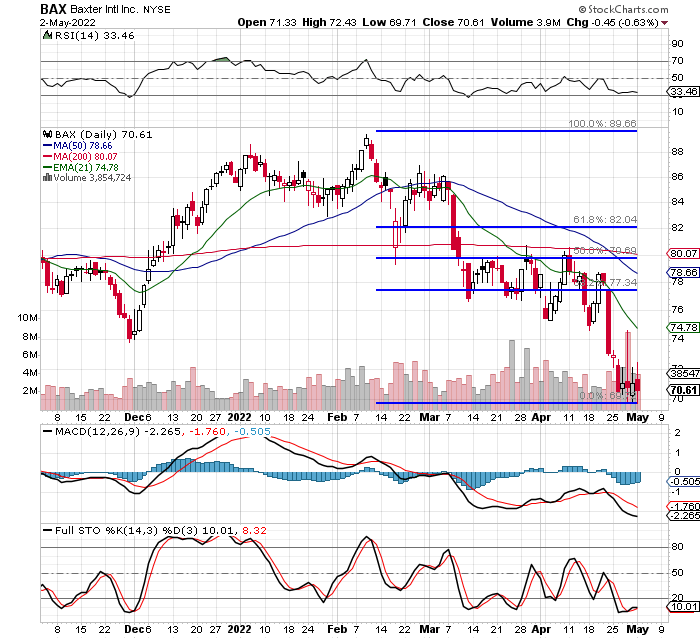 The stock is now down 21.2% from its February high, signaling something at least close to an oversold condition, and appears to have possibly stabilized for now, finding support just below $70 for three consecutive sessions. My initial point of entry is $69.83, eleven cents above the recent lows.
The problem with last week's earnings release was in the guidance. It wasn't awful. It just was not spectacular. The company expects full-year sales growth of 23% to 24% on a reported basis, or 25% to 26% in constant currency. It also sees full-year adjusted EPS at $4.12 to $4.20. Wall Street is at growth of 24% and adjusted EPS of $4.20, so a little light on guidance, but in the game.
I don't love the balance sheet. Oh, I mean Baxter can certainly pay their way with a current ratio of 2.1. Moving past "current" assets and liabilities, however, I find the entries for "goodwill," other intangibles and total debt to be a bit larger than I am usually comfortable with. Free cash flow is positive, but in decline. Tangible Book is not even positive.
So, why Baxter?
Good question.
Two reasons.
First, the stock has made this recent stand as the shares have approached their March 2020 lows:

Second, Baxter has scheduled an Investor Conference day for May 25 in Glenview, Illinois with an accompanying webcast. CEO Joe Almeida will provide, along with the rest of his management team, a closer look at Baxter's growth strategy, innovation pipeline (the company has been investing in a number of start-ups), and long-term plans.
No sure thing. Not in the least. But, and this could be a big but.... you do have a stock under pressure, trading at 17 times forward-looking earnings in an industry trading at 20 times, with a short-to medium-term (three weeks) potential catalyst on the horizon.
I do not have a price target on this trade. I have a target date.