Note: My mother is coming for a visit so I'm taking a few days off. My next Real Money column will be Tuesday morning, November 1.

As you know, I have called it the Either/Or Market for years. I still think it's that sort of market but I also think it is transitioning back to what we might term a more normalized market.

I realize the original acronym "FANG" was meant for four stocks: Facebook (now Meta (META) ), Amazon (AMZN) , Netflix (NFLX) and Google (now Alphabet (GOOGL) ) but over the years FANG and "FAANG" (which added Apple (AAPL) to the mix) came to mean those mega-cap tech stocks that were working. Netflix fell out of the running almost a year ago when the stock was cut by two-thirds. It has since clawed its way back, but is still less than half of what it was.

Then we lost Facebook in January of this year. It has lost nearly 75% of its value. This week it was Google and Microsoft (MSFT)  (FAANG +M) that got clipped, although they are still hanging tough. Amazon (AMZN) will join the list of generals that got taken to the woodshed as well.

The good news? It has been my belief that this handful of stocks were basically sucking all the energy out of the rest of the market. In other words, now that most of the generals have been shot there is a chance that the troops can jockey around and get some much-needed love.

Just look at the chart of the (QQQ) s relative to the equal weight (QQEW) . You don't need me to tell you the market-cap darlings are not winning.

As for the rest of the market, much of it hangs in there. Breadth stayed green on Thursday but it still acts a bit tired overall. That's the short-term overbought reading at work. The S&P 500 has been down two straight days now. You can see the tiny little tick down in the Oscillator Thursday. This is good, we need a back off. 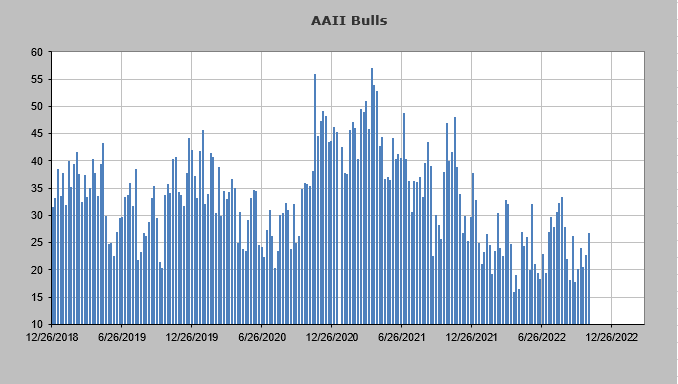 The NAAIM Exposure is now 54. It was 12 at the lows. It got to 70 in August so we'll call this neutral but again, you can see the change of heart.

The much more sensitive Daily Sentiment Index (DSI), though, is back down to 20 for the Nasdaq and 18 for the S&P. That tells me that if we can get a few more days to the downside these readings should fall as well. And low readings here are ultimately a short-term positive for the market.

So if we get some pullback we work the overbought reading off, we get sentiment more bearish than it has been this week and we can have another rally. And heck, now that everyone has discovered how great the DJIA has been, it would be even better if it backed off that channel line I drew in here Thursday.

Get an email alert each time I write an article for Real Money. Click the "+Follow" next to my byline to this article.
TAGS: Earnings | ETFs | Indexes | Investing | Markets | Stocks | Trading | Technology | U.S. Equity