Down big Friday, up big (so far) Monday. What's going on with this market and how do we approach it going forward?

Despite the notable declines, they occurred on much lighter volume than the prior positive session, with the Nasdaq volume one billion shares lighter. While not necessarily a game changer, it is worthy of note.

More importantly, though is the fact that all support levels held. There were no violations.

Meanwhile, the data remain rather neutral except for investor sentiment (contrarian indicators), which continues to show the market awash in bears to levels seen only twice in the past 20 years. We see this as a potentially significant catalyst.

As such, we believe some buying can be done at current levels, preferably near support. 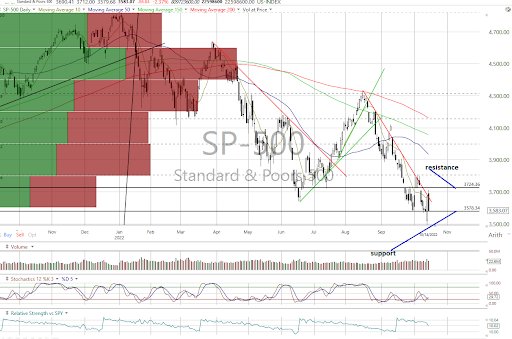 On the charts, all the major equity indexes closed lower Friday on negative internals on both exchanges as all closed at or near their lows of the day.

However, the sharp declines occurred on significantly lighter trading volume than the prior up session while, most importantly, all support levels held with the S&P 500 closing on support (see above). So, the near-term trends remain neutral on the DJIA and Dow Jones Transports with the rest bearish.

Cumulative market breadth, however, has yet to improve with the advance/decline lines for the NYSE and Nasdaq negative and below their 50-day moving averages.

We would also note the VIX is at what has been a peak in volatility over the past year. It implies the potential for some lessening of volatility in the markets.

The percentage of S&P 500 issues trading above their 50-day moving averages (contrarian indicator) dropped to 11% and remains bullish.

The detrended Rydex Ratio, (contrarian indicator), continues its very bullish signal lifting only slightly to -3.21. The ETF traders have extremely leveraged short exposure and, in our opinion, could provide a strong catalyst to the upside.

Last week's AAII Bear/Bull Ratio (contrarian indicator) rose to 2.87 and is at a level of bearish sentiment only surpassed twice in the past two decades, those times being during the banking crisis in 2009 and the Covid pandemic in 2020.

The 10-Year Treasury yield closed higher at 4.01% and one basis point above what we viewed as resistance. We now view support as at 3.7% with resistance at 4.09%.

Friday's swoon did not have enough impact on the charts to alter our opinion that some buying of equities can begin when trading near support.