The charts of the major equity indexes violated several resistance levels Tuesday. As a result, all the indexes are currently in near-term uptrends. Market cumulative breadth improved as well.

Nevertheless, we remain hesitant to elevate our current near-term macro-outlook for equities as the 10-Year Treasury yield also violated resistance and the valuation spread continues to widen.

Meanwhile, while the stochastic levels are well into overbought territory and can remain so for extended periods, they suggest buyers may chasing price at current levels. 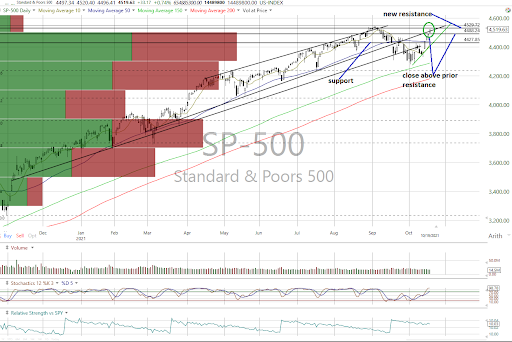 All the major equity indexes closed higher Tuesday with positive internals on the NYSE and Nasdaq as all closed at or near their intraday highs with buyers remaining in control through the end of the session.

The charts saw several indexes close above resistance with the S&P 500 (see above), DJIA, Nasdaq Composite, Nasdaq 100 and MidCap 400 achieving that success.

Regarding trend, the gains left all the indexes now in near-term uptrends.

Also cumulative market breadth improved with the All Exchange, NYSE and Nasdaq A/Ds all near-term positive and above their 50-day moving averages.

The one proverbial fly in the ointment are the stochastic levels for the indexes as all are well into overbought territory and suggest buyers may be currently chasing price. They are capable of remaining overbought for extended periods, however, and have yet to flash bearish crossover signals.

The data find the McClellan 1-Day Overbought/Oversold Oscillators mostly in neutral territory with the exception of the NYSE, which is mildly overbought (All Exchange: +42.36 NYSE: +51.42 Nasdaq: +35.72).

The detrended Rydex Ratio (contrarian indicator), measuring the action of the leveraged ETF traders, remains neutral and unchanged at 0.89.

The Open Insider Buy/Sell Ratio remains neutral as well at 50.8. While still neutral, recent buying by insiders is an encouraging improvement.

The forward 12-month consensus earnings estimate for the S&P 500 from Bloomberg lifted to $214.05 per share. As such, the S&P's forward P/E multiple is 21.1x with the "rule of 20" finding fair value at approximately 18.4x as the valuation gap has been widening.

The 10-Year Treasury yield violated resistance closing at 1.64%. Its uptrend remains intact with new resistance at 1.70% with support at 1.47%. In our opinion, this trend could prove problematic for equities.

While everything looks rosy on the charts, stochastic levels suggest we could be chasing price here while the 10-Year yield is becoming more of a potential threat. We remain "neutral" in our near-term macro-outlook for equities.