Folks seem to fall into one of two categories on the sentiment front these days. Oh sure, mostly they have not fully embraced the rally -- or at least not like they have in the past -- but I see there are the bulls who believe we will go back to the old highs and there are the bears who are calling for a retest.

Let me say something about the retest side of it. My definition of a retest is a market that revisits the lows and shows us positive divergences. That means fewer new lows. It means an oversold market, preferably with a higher low in the Oscillator (telling us there was less downside momentum on that trip down). It means breadth makes a higher low or at least doesn't lead the way down.

To me those are positive divergences. Recall back in June my call was that the tech/growth stocks should rally as I highlighted the (QQQ)  's. So let's look at Nasdaq's Oscillator. June looks like a higher low to me, thus we put a check mark on the retest box -- in other words, June was not a capitulatory low (remember when everyone was looking for capitulation?), June had a positive divergence.

There were definitely fewer lows on Nasdaq in June. Sure, there were 1,100 but that was fewer than the 1,700 we saw in both January and May. Another check for June.

And we certainly had a higher low in breadth. I know I highlighted that situation using the McClellan Summation Index. Another check for June.

I would, however, ask you to take a look once again at the Sentiment Cycle. Back In June I said I thought we were at Discouragement when it came to growth stocks. I think now we're in that Wall of Worry on our way toward Anxiety. So perhaps those "retest" folks are really looking for a down move, akin to the slide toward Aversion? 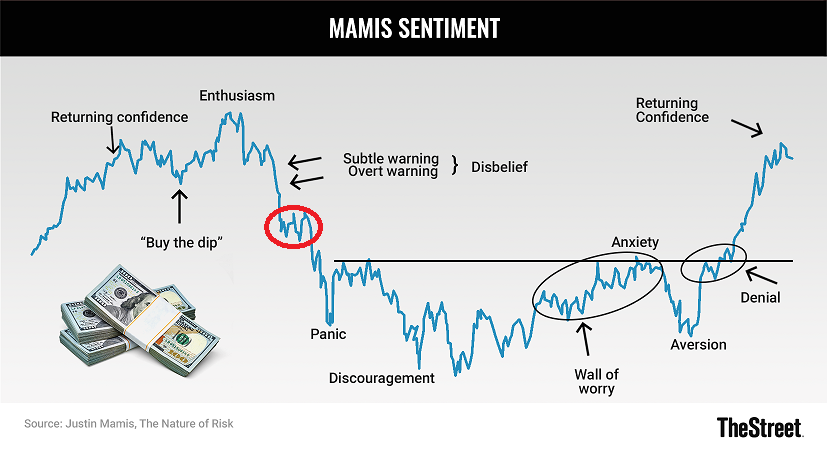 In the meantime the market got overbought as we headed into August and on July 29 the intraday high was 4140 for the S&P and the close on Monday was 4140. That's the loss of upside momentum. We are still overbought but thus far the market has showed us it is just churning up here.

Sentiment-wise the put/call ratio remains elevated as it was 1.0 on Monday. But the Daily Sentiment Index (DSI) for the VIX is now 17 so we have to be on the lookout for a pick-up in volatility, especially if the market rallies on Tuesday because that ought to lower the DSI even more.

Get an email alert each time I write an article for Real Money. Click the "+Follow" next to my byline to this article.
TAGS: Indexes | Markets | Stocks | Trading | VIX | U.S. Equity