The near-term trends on the equity index charts remain a mix of neutral and positive projections. The data remain generally neutral as well. 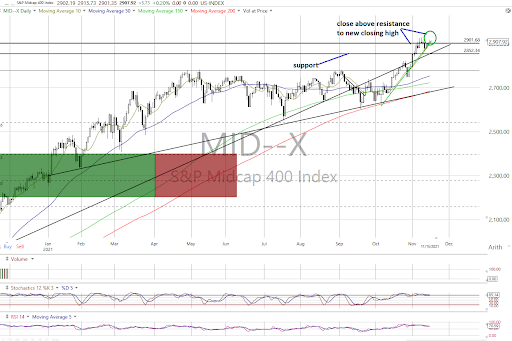 Only the Dow Jones Transports and MidCap 400 (see above) managed to post gains as the rest declined.

The only technical event of note was the MidCap 400 managing to post a new closing high.

There was no change in the near-term trends as the Dow Transports, MidCap 400 and Valeu Line Arithmetic Index remain positive with the rest neutral.

Cumulative market breadth remains neutral on the All Exchange, NYSE and Nasdaq.

The detrended Rydex Ratio (contrarian indicator), measuring the action of the leveraged ETF traders, dipped to 1.33 but remains well inside bearish territory as they remain extended in their leveraged long exposure.

The Open Insider Buy/Sell Ratio lifted to 27.2 and remains neutral.

The forward 12-month consensus earnings estimate from Bloomberg has dipped to $214.04 per share. As such, the S&P's forward P/E multiple is 21.9x with the "rule of 20" finding fair value at approximately 18.4.

While we would like to be more upbeat regarding the market's near-term prospects, the charts and data discussed above suggest we maintain our near-term "neutral" macro-outlook for equities.

There Are Good Reasons to Be Cranky About This Market

I'd like to spin Monday's action as bullish but with what's going on under the hood, it is hard.

The challenge for traders is determining how long the Omicron uncertainty will weigh on the markets.

The Oil Spill Was Ugly, but Support Is Holding: Key Levels to Watch

Volatility events are commonly followed by market consolidation as traders pair risk and lick their wounds.