Friday's poor market performance indicates our assumption that the correction had been completed was wrong and premature. Important chart recovery action is now needed to bring the idea back to a point of some credibility.

All the major equity indexes closed at or near their intraday lows with all but one chart breaking support, thus turning all near-term trends negative except for one. Market breadth weakened further and is now negative on all the indexes.

Offering some optimism, investor sentiment remains near peak levels of fear that offer some encouragement. 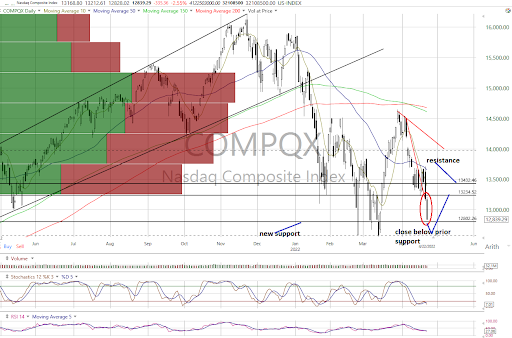 The action also took our speculation that the Nasdaq Composite (see above) and Nasdaq 100 were possibly forming inverted head & shoulders patterns off the table as the right shoulder levels were significantly lower than those on the left.

And while the S&P 500 and DJIA now appear to be in the latter stages of the same pattern, the failures of the Nasdaq Composite and Nasdaq 100 leaves the S&P and DJIA patterns vulnerable to failure as well.

Market breadth weakened as well with the cumulative advance/decline lines for the All Exchange, NYSE and Nasdaq negative and below their 50 DMAs.

Digging Into the Market Data

Meanwhile the Investors Intelligence Bear/Bull Ratio (contrary indicator) was 32.1/35.8, remaining bullish. We reiterate such high levels of fear have frequently been upside catalysts over the years once the markets start to improve.