As we approach the end of a largely positive week for the market, let's check the dashboard.

Even as the major equity indexes all closed near their intraday highs Thursday, the high-volume resistance levels on the charts remained intact. What is that telling us?

Meanwhile, the data find the McClellan 1-day OB/OS Oscillators are overbought as are the stochastic levels for the indexes.

Still, the significant degree of bearish sentiment (contrarian indicator) may have some counterbalancing effect.

Let dig deeper and come to some conclusions. 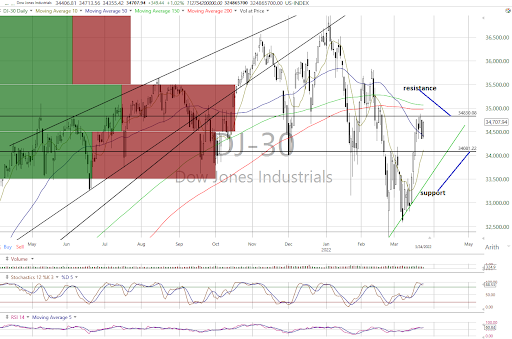 All the major equity index charts closed higher Thursday with positive internals on the NYSE and Nasdaq with all closing at or near their highs of the day.

Yet the rally was not sufficient to overcome the high-volume resistance levels that are present on most of the indexes that, in our view, need to be surpassed for further strength to be accomplished. Such high-volume levels typically require multiple attacks before being violated.

All the chart trends remain in near-term uptrends with the DJIA (see above) joining the rest by closing back above its 50-day moving average.

The cumulative advance/decline lines for the All Exchange, NYSE and Nasdaq remain positive as well.

However, the stochastic levels on all the charts remain overbought. While they have yet to register any bearish stochastic crossover signals, they are a bit cautionary.

The percentage of S&P 500 issues trading above their 50-day moving averages (contrarian indicator) rose to 54% and remains neutral.

The detrended Rydex Ratio (contrarian indicator) saw a further lessening of their leveraged short exposure to -0.85 and is now mildly bullish.

Given the size of recent gains with nearly vertical near-term uptrends as they approach high-volume resistance levels, combined with the data, we continue to think the markets are more likely to go through a period of consolidation of gains before further progress is made. Yet extremely bearish investor sentiment may be a counterbalancing and bullish influence.