The major equity indexes closed notably lower Friday with broadly negative internals with the emergence of the Omicron variant. All closed at or near their lows of the day with multiple negative technical events being registered on the charts, leaving their near-term trends a mix of neutral and negative projections.

However, the McClellan one day OB/OS Oscillators are now at levels largely coincident with bounces while insiders further ratcheted up their buying activity. 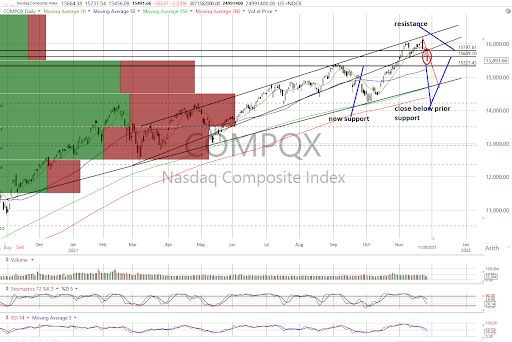 The major equity indexes closed notably lower Friday with very negative internals on the NYSE and Nasdaq as all closed near their intraday lows.

The heavy selling resulted in every index, except the Dow Jones Transports, closing below their support levels while some 50-day moving averages and trend lines were violated as well.

Both the DJIA and Nasdaq Composite (see above) saw their near-term trends turn negative from neutral while the Value Line Arithmetic Index closed below is 50 DMA.

As such, the charts are mostly in neutral trends with the DJIA, Nasdaq Composite and Russell 2000 negative.

Market breadth weakened further with the All Exchange, NYSE and Nasdaq cumulative advance/decline lines all negative and below their 50 DMAs.

qNo stochastic signals were generated, although some are close to being oversold.

The data finds the McClellan 1-Day Overbought/Oversold Oscillators moved deeper into oversold territory and now at levels that are typically the lows within corrections as seen on their charts (All Exchange: -97.75 NYSE: -105.18 Nasdaq: -91.89). In fact, the NYSE OB/OS is very oversold.

The detrended Rydex Ratio (contrarian indicator), measuring the action of the leveraged ETF traders, dipped to 1.12 as the ETF traders lightened up on leveraged long exposure. However, it remains inside bearish territory.

The Open Insider Buy/Sell Ratio, on the other hand, rose to 54.4 from 48.9 as insiders continued to increase their buying activity. It remains neutral but has been improving over the past several sessions.

While the charts and breadth suffered damage Friday, the OB/OS oscillators and insider buying activity suggest bounce potential. We remain "neutral" in our near-term macro-outlook for equities and are of the opinion some very selective buying may now be appropriate.

Get an email alert each time I write an article for Real Money. Click the "+Follow" next to my byline to this article.
TAGS: Indexes | Markets | Technical Analysis | Treasury Bonds | U.S. Equity | Coronavirus