As we begin September, historically the worst-performing month of the year for markets, what are the charts and data telling us?

What was unusual about Tuesday's action is the dips in the indexes occurred with very positive breadth and on higher trading volumes. We view that as slightly encouraging as up days with negative breadth have been the typical divergences of late.

One chart did turn neutral from positive, but the bulk of the indexes remain in near-term uptrends as does market breadth.

Let's take a closer look at all the charts and data. 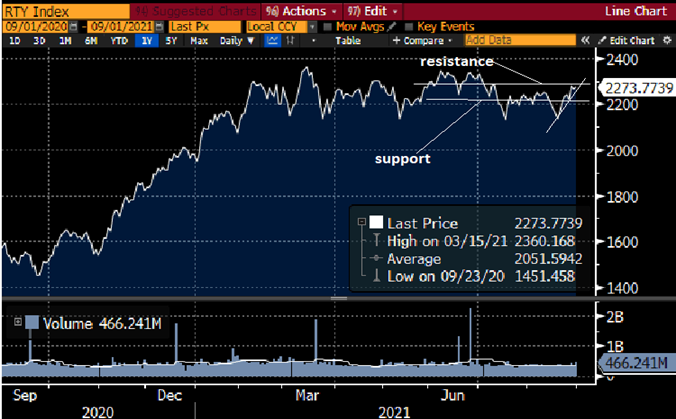 All the major equity indexes closed lower Tuesday except the Russell 2000 (see above), which posted a minor gain. What was unique, as mentioned above, was the fact that the dips occurred with positive market breadth on higher trading volumes. We would view that anomaly as somewhat encouraging.

The DJIA trend remains neutral as well with the balance in short-term uptrends.

The Rydex Ratio (contrarian indicator), measuring the action of the leveraged ETF traders, saw a notable jump to 1.43 as the ETF traders significantly increased their leveraged long exposure and is now in bearish territory.

The Open Insider Buy/Sell Ratio was unchanged at a neutral 38.5.

This week's contrarian AAII bear/bull ratio saw an increase in bears and bulls, remaining neutral (32.77/35.43) with Investors Intelligence Bear/Bull Ratio at a bearish 18.5/50.0 (contrary indicator) as a few advisors left the bull camp.

The 10-Year Treasury yield rose to 1.3% but remains within its current trading range with resistance at 1.4% and support at 1.23%. The recent shift of the 10-Year yield into a higher trading range could cause some issues for the markets.

Get an email alert each time I write an article for Real Money. Click the "+Follow" next to my byline to this article.
TAGS: Indexes | Markets | Small Cap | Stocks | Technical Analysis | Treasury Bonds | U.S. Equity