In our opinion, the trading action so far this week is not unusual, given the magnitude of the rally from the October lows.

Overall, the market retracement over the past two days suggests to us we have seen a consolidation of gains from the market October lows.

The early weakness Wednesday morning may prove instructive should the markets draw in buyers that would hold support levels later in the day. Nonetheless, we remain of the opinion that weakness should be bought near support. 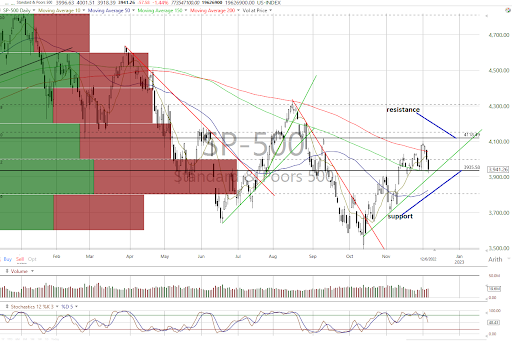 On the charts, all the major equity indexes closed lower Tuesday with negative NYSE and Nasdaq internals.

All but one closed below their near-term uptrend lines, turning their trends to neutral from bullish. The one outlier was the S&P 500 (see above), which remains bullish. However, the only index to violate support was the Russell 2000 as the rest managed to hold on.

Cumulative market breath also saw a shift as the advance/decline lines for the All Exchange, NYSE and Nasdaq turned neutral from bullish with the Nasdaq's dipping below its 50-day moving average.

The bearish stochastic crossovers that foreshadowed Tuesday's action have all returned to neutral as well.

On the data front, the bulk remains neutral

The percentage of S&P 500 issues trading above their 50-day moving averages (contrarian indicator) shifted to neutral from bearish at 78%. While still in its upper ranges, it is no longer on its prior caution signal. 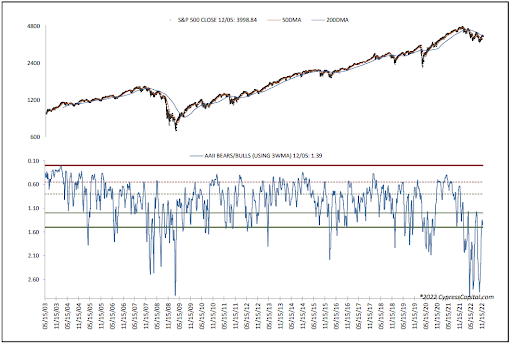 The forward 12-month consensus earnings estimate from Bloomberg for the S&P 500 has slipped to $225.51 per share. As such, its forward P/E multiple now stands at 17.5x, remaining at a premium, but a narrower one, to the "rule of 20" ballpark fair value of 16.5x.

Overall, it's too early to say the losses of the past two sessions have completed their implied consolidation of gains. However, Wednesday's close may tell the tune in that regard. We remain buyers of weakness near support.

Get an email alert each time I write an article for Real Money. Click the "+Follow" next to my byline to this article.
TAGS: Markets | Technical Analysis | Trading | Treasury Bonds | U.S. Equity | Indexes