Tuesday's market strength was still not sufficient to alter the near-term chart trends while no violations of resistance were registered. Nonetheless, there is some encouragement as we believe it appropriate now to raise our support levels on every equity index.

Meanwhile, investor sentiment is so extremely fearful that, as a contrarian indicator, it continues to suggest further market strength while there may be some backing and filling over the very near term.

We continue to expect tests of resistance on the index charts. 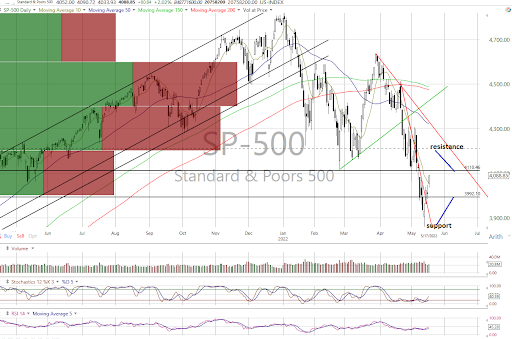 All the major equity indexes posted sizable gains Tuesday with positive internals on the NYSE and Nasdaq. However, while all closed near their intraday highs, there were no violations of resistance or trend, leaving the S&P 500, DJIA and Dow Jones Transports neutral as the rest remain in near-term downtrends.

Still, the past few sessions suggest a lifting of expected support levels is now appropriate:

Market cumulative breadth improved on the Nasdaq, turning it neutral from negative and joining the All Exchange and NYSE in that condition.

The stochastic levels are now neutral after flashing bullish crossover signals as of Monday's close.

The percentage of S&P 500 issues trading above their 50-day moving averages (contrarian indicator) rose to 31% and is now neutral versus its prior bullish level.

Of importance, the Open Insider Buy/Sell Ratio rose to 120.5 and is at its highest level of insider buying since the Covid lows of 2020.

We reiterate the most encouraging data factor for the near-term remains the investor sentiment data.

The detrended Rydex Ratio (contrarian indicator) remains very bullish at -2.53 as the leveraged ETF traders have expanded their leveraged short exposure. Its chart below shows only five times in the past decade have the ETF traders been so heavily leveraged short, all of which were followed by rallies. 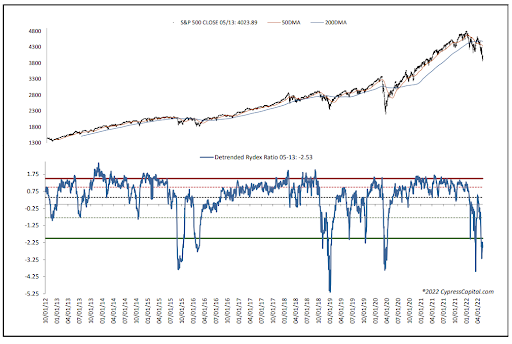 With investor sentiment at levels that have historically preceded market rallies, and as valuation has seen a notable moderation, we believe the market is likely to see more strength while there may be some consolidation of recent gains.