All the major equity indexes closed at or near their highs of the day Thursday as late-session selling failed to appear. Still, despite a few positive technical events on the charts, only one index is not in a near-term downtrend.

Yet, while the charts and market breadth remain negative, the data are continuing to send some positive signals as the 1-day McClellan OB/OS Oscillators remain nicely oversold while corporate insiders continue to accelerate their buying activity and stochastic readings remain very oversold. 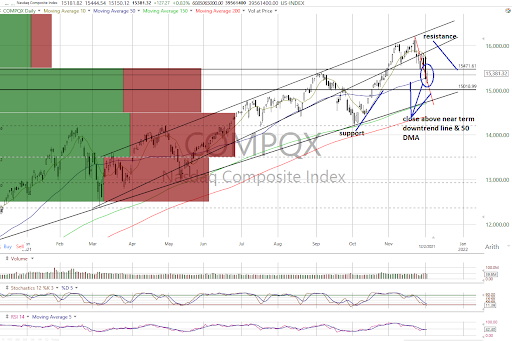 All the major equity indexes closed higher Thursday with positive internals on the NYSE and Nasdaq as trading volumes dipped from the previous session on both. The fact that they closed near their highs of the day is somewhat encouraging.

Also, the S&P 500, Nasdaq Composite and Dow Jones Transports closed back above their 50-day moving averages.

Positive breadth Thursday was not strong enough to alter the current negative trends for the cumulative advance/decline lines for the All Exchange, NYSE and Nasdaq.

Stochastic levels remain deeply oversold on all the indexes. However, bullish crossovers have yet to appear.

Looking at the data, the McClellan 1-Day Overbought/Oversold Oscillators remain oversold despite Thursday's strength (All Exchange: -80.68 NYSE: -75.32 Nasdaq: -82.73). They suggest potential for further strength, in our opinion.

The percentage of S&P 500 issues trading above their 50-day moving averages rose to 43% and remains neutral.

Importantly, the Open Insider Buy/Sell Ratio rose to 74.4 as insiders continued to accelerate their buying as the crowd has headed for the exits.

The detrended Rydex Ratio (contrarian indicator), measuring the action of the leveraged ETF traders, was unchanged at 1.07. They have been decreasing their leveraged long exposure throughout the recent correction. It remains cautionary.

We remain "neutral/positive" in our near-term macro-outlook for equities largely due to the OB/OS levels, increasing insider buying activity, stochastic readings and the fact that we have recently seen data levels at what have typically been registered at market-correction lows.