With another another negative open Monday, the rapidity and steepness of the recent downdraft has us on the lookout for evidence that the waters have calmed, and the bulk of the storm has passed.

However, market breadth remains rather weak while the data have yet to suggest the recent correction has been completed, given the McClellan OB/OS levels.

To the charts and the data... 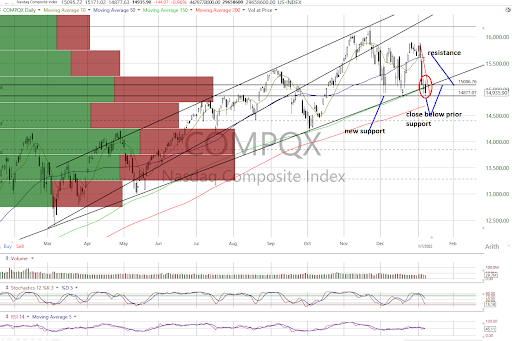 The growth stocks continued to suffer, with the S&P 500, Nasdaq Composite and Nasdaq 100 closing below support. The Nasdaq Composite (see above) also closed below its long-term uptrend line, which cast yet another technical cloud.

The action left the S&P, Nasdaq Composite and Nasdaq 100 in near-term downtrends with the rest neutral.

There was no shift in the market's cumulative breadth with the All Exchange and Nasdaq A/Ds negative and the NYSE neutral as all remain below their 50 DMAs.

A minor ray of hope is coming from the stochastic levels for the Nasdaq Composite and Nasdaq 100, which are now oversold. However, they need to be confirmed by the charts.

The McClellan 1-Day Overbought/Oversold Oscillators are still neutral and not yet suggesting an oversold bounce (All Exchange: -1.13 NYSE: +16.58 Nasdaq: -14.73).

The percentage of S&P 500 issues trading above their 50-day moving averages dipped to 64% and remains neutral.

The Open Insider Buy/Sell Ratio slipped to 36.8 and remains neutral as well.

Last week's contrarian AAII Bear/Bull Ratio dropped to 1.12 but remained bullish as the crowd remains skeptical of the markets.

The forward 12-month consensus earnings estimate for the S&P 500 from Bloomberg has slipped to $222.10 per share. As such, the S&p's forward P/E multiple is 21.1x with the rule of 20" finding ballpark fair value at 18.2x as a result in the rise of the 10-Year Treasury yield.

The charts and data, as of Friday's close, had little to offer regarding implications that the recent slide in the market has been completed. However, given the depth and velocity of the declines, we are keeping our eyes open for bottoming signals as valuations have improved.

Get an email alert each time I write an article for Real Money. Click the "+Follow" next to my byline to this article.
TAGS: Markets | Stocks | Technical Analysis | Trading | Treasury Bonds | U.S. Equity

What Do I See Beyond the Cult of Personality? Hydrocarbon Opportunity

Don't ever let a single-modality outlook cloud your investing behavior. It's a great big world out there.

After years of missteps, there are signs that the chipmaker is at the beginning stage of a recovery.

As Bears Pound the Bulls, 2 Indicators Strongly Suggest Relief Is on the Way

They are extremely oversold and at levels coincident with notable market rallies over the past year.