The Fed's announcement Wednesday afternoon will likely create some volatility. Nonetheless, we remain of the opinion that the markets are in an improving environment after the losses from the beginning of the year.

Despite Tuesday's market declines, all the index charts remain in near-term uptrends, although some flashed bearish stochastic crossover signals, which we continue to believe should be respected.

The data find the McClellan OB/OS Oscillators that had been overbought and cautionary largely neutral at this stage. And while some of the sentiment indicators have recently moderated, the AAII Bear/Bull Ratio (contrarian indicator) still finds the crowd fearful at 1.86. 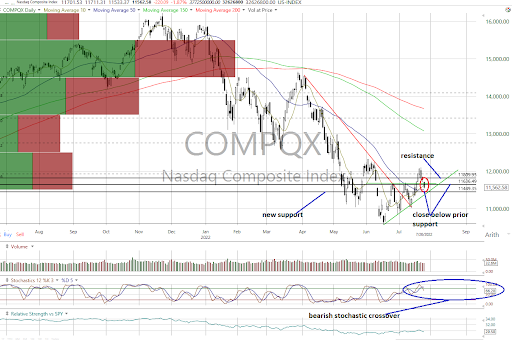 The Nasdaq Composite (see above) and Nasdaq 100 both closed below their support levels. Importantly, however, their near-term uptrend lines remain intact as they do for the rest of the index charts as well.

Market breadth saw some weakening as the cumulative advance/decline lines for the All Exchange and Nasdaq turned neutral from positive with the Nasdaq below its 50-day moving average. The NYSE's remains positive.

Bearish stochastic crossover signals were generated for the S&P 500, Nasdaq Composite and Nasdaq 100.

The McClellan Overbought/Oversold Oscillators are now mostly neutral, after their prior cautionary levels (All Exchange: +29.52 NYSE: +50.19 Nasdaq: +15.81). Only the NYSE remains mildly overbought.

The percentage of S&P 500 issues trading above their 50-day moving averages (contrarian indicator) is neutral, dipping to 52%.

The detrended Rydex Ratio (contrarian indicator) dipped to -0.97 and is mildly bullish versus its previous bullish status.

However, the Investors Intelligence Bear/Bull Ratio (contrary indicator) moderated to neutral with the bears and bulls being dead even at 35.2/35.2.

Tuesday's declines were not unexpected given the near-term overbought conditions. However, the overbought levels have now largely abated while all the chart near-term trends remain positive, the crowd is still fearful and valuation is trading at a discount. As such, despite the downdraft, the charts and data continue to suggest we are in an improving environment for equities, by our work.

Get an email alert each time I write an article for Real Money. Click the "+Follow" next to my byline to this article.
TAGS: Federal Reserve | Indexes | Investing | Markets | Stocks | Technical Analysis | Trading | Treasury Bonds | U.S. Equity