The charts put in an impressive day backed by stronger market breadth Friday.

Virtually every major equity index closed above their resistance levels Friday with all improving their near-term trends to neutral or bullish.

The data, however, is mixed.

Yet, their warning is being countered by the detrended Rydex Ratio (contrarian indicator), which finds leveraged ETF traders increasing their short exposure to historical extremes and on a very bullish signal.

Thus, the chart and breadth improvements combined with the data suggest to us investors may now be a bit more comfortable in buying market dips. 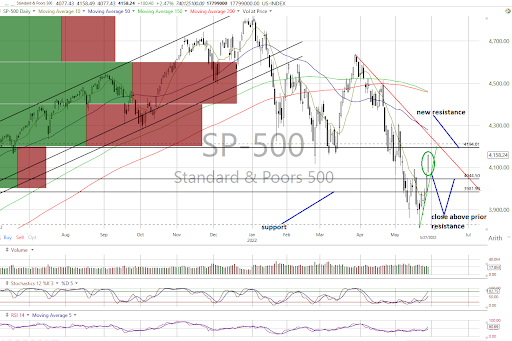 All the major equity indexes closed higher Friday with positive internals on good trading volume. All closed at or near their intraday highs with strong gains that were sufficient to move all above their respective resistance levels.

Trend lines improved as well with the S&P 500 (see above) and DJIA turning near-term positive from neutral as the rest shifted from negative to neutral.

Importantly, the gains were supported by strong market breadth that now finds the cumulative advance/decline lines for the All exchange, NYSE and Nasdaq now positive with the NYSE's back above its 50-day moving average.

Stochastic levels are overbought but no bearish crossover signals have been generated.

The percentage of S&P 500 issues trading above their 50-day moving averages (contrarian indicator) rose to 44% and is now neutral.

However, the detrended Rydex Ratio (contrarian indicator) remains very bullish, dropping to -2.83 as the ETF traders remain leveraged short at historically high levels that have been followed by marker rallies as they are forced to cover. As such, the Rydex/Insider dynamic remains encouraging. 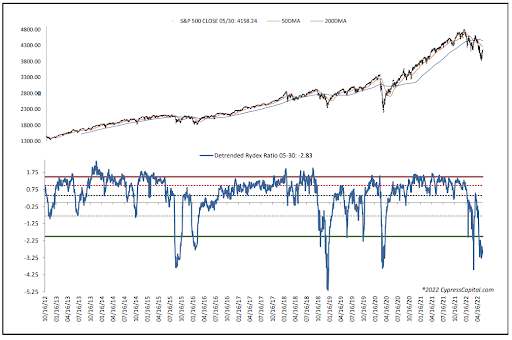 The Investors Intelligence Bear/Bull Ratio (contrary indicator) also remained very bullish signal and at a decade peak of fear at 43.0/27.8. Only twice in the past decade has bearish sentiment been this extreme, both of which were coincident with market bottoms.

The forward 12-month consensus earnings estimate from Bloomberg for the S&P 500 has slipped to $235.56 per share. As such, the S&P's forward P/E multiple remains at 17.7x and is no longer at a discount to the "rule of 20", which finds ballpark fair value at 17.3x.

Friday may well have been a game changer regarding relief from the past several days of market weakness. The charts and psychology suggest there is more to come although overbought conditions may need to be neutralized first.