All the major equity indexes remain in near-term neutral trends versus their prior bearish implications while cumulative breadth has seen some improvement as well.

The data remain generally neutral except for investor sentiment (contrarian indicators) that continue to be at historically high levels of bearish opinions that have tended to be coincident with market lows.

Taking this all together, we believe that the charts and data are implying a near-term bottom has likely been established, and, in combination with investor sentiment, suggests buying weakness may now be appropriate. 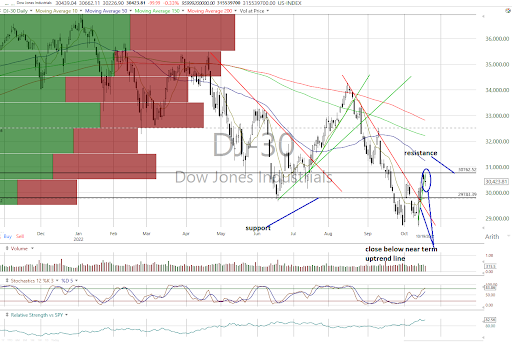 On the charts, all the major equity indexes closed lower yesterday with negative internals on the NYSE and Nasdaq as trading volumes dropped below those of the previous session.

All closed near the midpoints of their intraday ranges.

However, while the weakness moved the DJIA (see above) back to neutral from bullish as it closed below its near-term uptrend line, no other technical events of import were generated.

As such, all the index charts are now in near-term neutral patterns versus their prior bearish slopes.

We would also note some improvement has been achieved regarding cumulative market breadth as the A/D lines for the All Exchange, NYSE and Nasdaq are now neutral, having violated their downtrends.

The percentage of S&P 500 issues trading above their 50-day moving averages (contrarian indicator) rose to 20% and is now neutral, shifting from bullish.

The detrended Rydex Ratio, (contrarian indicator), continues its very bullish signal at -2.9. The ETF traders continue to have extremely leveraged short exposure and, in our opinion, create the probability of becoming a bullish catalyst when they are forced to cover.

This week's AAII Bear/Bull Ratio (contrarian indicator) dipped 2.67 and remains at a level of bearish sentiment only surpassed twice in the past two decades, those times being during the banking crisis in 2009 and the Covid pandemic in 2020.

This week's Investors Intelligence Bear/Bull Ratio (contrary indicator) is 44.7/25.0, its highest level since 2013.

The forward 12-month consensus earnings estimate from Bloomberg for the S&P 500 has dropped to $231.03 per share. It has been steadily declining over the past several sessions. As such, the S&P's forward P/E multiple is 16.0x and at a very slight premium to the "rule of 20" ballpark fair value of 15.9x.

We believe the charts and data suggest buying weakness over the near-term.