By STEPHEN GUILFOYLE Apr 26, 2022 | 07:53 AM EDT
Stocks quotes in this article: MMM, GE, PEP, RTX, ROP, SHW, UPS, GOOGL, CMG, CB, MSFT, TXN, V, KSS, SPG, BAM, GS, ACTG, FRG, GME, TWTR, TSLA, MS, DWAC, XLE, SLB, HAL
My brain tells me that it probably wasn't so. It sure did feel like the entire marketplace turned on the Elon Musk/Twitter ( TWTR) news.
Impossible. Right? Like Lightning.
In just a few weeks time, the Tesla ( TSLA)  CEO purchased a large stake in Twitter, was offered a seat on the company's board, refused that seat... preferring instead to be a "passive" investor, and then launched an unsolicited bid for the company.
Twitter responded to that bid by initially implementing a "poison pill" that would limit Musk's ability to further build his ownership stake. However, over the weekend, Twitter's board was forced into the position of having to negotiate with Musk as he unveiled $25.5B of fully committed debt and  margin loan funding led by Morgan Stanley ( MS) , completing his financing package. It didn't hurt that the board also reportedly received a number of calls from large shareholders over the weekend asking why they were fighting what was basically an offer of $54.20 per share, which is a 38% premium over where Twitter's stock closed on April 1, which was the day prior to the day that Musk filed the paperwork revealing his 9%+ stake in the firm.
It must be understood that Twitter management teams both past and present have reminded no one of the 1927 Yankees.
Ultimately, Twitter's board agreed to sell the company for $54.20 per share, or roughly $44B. More details will become available as the appropriate paperwork is filed. The deal is expected to close this year, and Musk is expected to take Twitter private.
The news story of the day closed with Musk espousing the ideals of "free speech" and former President Donald Trump answering the obvious question, telling Fox News that he would not be returning to Twitter regardless, and would prefer to use his own social media platform "Truth Social."
TWTR closed up 5.66% for the Monday regular session at $51.70, while Digital World Acquisition Corp ( DWAC) , the SPAC that is set to take the former president's social media company public, dropped 12.9%, closing at $35.71.

Just how much can be taken away from Monday's sharp market reversal? To be honest, it sure did feel like just another bear-market rally. That does not mean that the price discovery is any less meaningful, though. A rally such as this could be where, when and how an actual market bottom is created.
The S&P 500 had been down 1.7%, turning precisely at the 4200 level before closing up 0.57% at 4296. 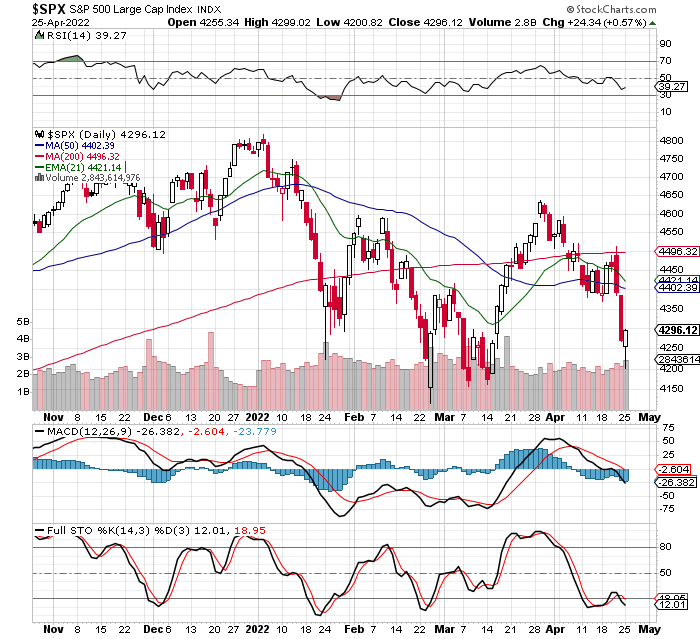 Readers will note that Monday's "white candle" appears quite unimpressive when measured against the "red" candles created by the Thursday (also a reversal) and Friday selloffs. While the S&P 500's Full Stochastics Oscillator still looks rather oversold, the S&P 500's Relative Strength reading remains neutral and has not appeared to be technically oversold since (gasp) January.
The daily Moving Average Convergence Divergence (MACD) looks negative, as it has since early April. Monday's action did nothing to curl the 12-day exponential moving average (EMA) in a northerly direction.
Basically, my three key indicators for the S&P 500 appear to be sending a less-than-helpful "mixed bag" of signals. The index now stands significantly below all of its key moving averages, but also well above its February and March lows. 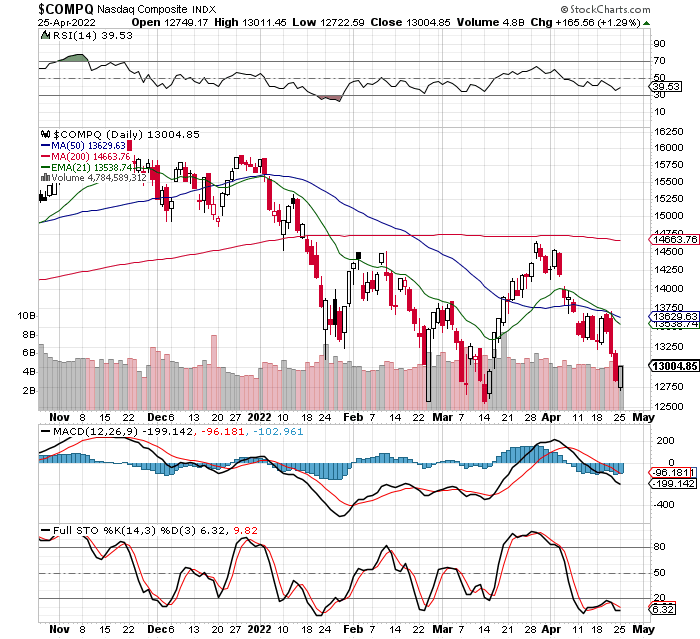 The same chart, but of the Nasdaq Composite, offers no more information that we were able to glean from the S&P 500. The Nasdaq Composite closed up 1.29% on Monday at 13,004, after having been down 0.9% earlier in the session. This index is now down 16.88% year to date, and down 19.8% from its all-time high in November.
Except for a more deeply oversold-looking Full Stochastics Oscillator, the key indicators more or less tell the same tale as they do for the S&P 500.

The two most interesting takeaways from the domestic marketplace for me on Monday, were the flow of capital into Treasury markets, and the sharp harvesting of profits across the Energy sector as illustrated through the SPDR ETF ( XLE) that closed down 3.31%.
For the regular Monday session, the U.S. 10-Year Note rallied fairly hard, as that specific yield dropped to 2.82%. I see 2.79% at zero dark-thirty this morning. The U.S. 2-Year Note was equally as strong, paying just 2.63% by day's end on Monday and paying just 2.60% early this morning.
Economists and investors will note that the spread between what 10-Year and 2-Year paper yields is starting to narrow again after peaking at 40 basis points less than two weeks ago:

The spread between the yields of the 10-Year Note and the 3-Month T-Bill, while not nearing an inversion, is infinitely more important to economists than is the 10-Year/2-Year spread, as a predictor of slowing economic activity, and that spread has entered into something that over the past few days... looks almost like free-fall:

The Energy sector SPDR ( XLE) gave up 3.31% for the Monday session, gapping below its 50-day simple moving average (SMA), which could very well be important as this could force some portfolio reallocation:

That ETF was led lower by the Dow Jones U.S. Oil Equipment & Services index that was pounded for 6.07%. The two worst-performing large-caps in that index were Schlumberger ( SLB) , down 7.11%, and Halliburton ( HAL) , down 6.26%. Hey Sarge, didn't you literally just buy SLB? Yes, yes I did.
Back to where I was going with this. You see that last candle on the XLE chart? XLE had been down as much as 6.8% on Monday, creating what appears to be a "hammer" candlestick in the process. This indicates an intra-session reversal, of which you are well aware. The implication is that such price discovery is considered to be quite bullish. Just one thing is still required. Confirmation.
While the hammer is a one-day pattern, the next candle on the chart has to be an "up" or in the case of this chart, a "white" candle, so it's really a two-day ball of wax. We see an up day for the XLE on Tuesday, and we may have a ballgame. Without confirmation, the "hammer" fades to meaninglessness.
Overall, the "hammer" candle is a short-term trading signal with an approximate .600 batting average. Not an indicator of medium to long-term change of trend, so treat accordingly.

Get a Load of This Guy

I found the most interesting story of the day on Monday to be Melvin Capital's aborted plan to remove a "high-water mark" that prevents hedge funds from charging for performance until after losses have been recovered (I read the story in the Financial Times).
You all already know that Melvin Capital lost 53% last January after placing large, apparently unprotected bets against retail investor favorite GameStop ( GME) . Melvin finished last year down 39%, recovering only a minority portion of January 2021's losses after receiving an emergency injection of cash ($2.75B) from Citadel LLC and Point72 Asset Management. As the story played out, Melvin went on to lose an additional 20.6% for Q1 2022. People give these guys money?
Apparently, there was enough negative feedback to provoke Melvin founder Gabe Plotkin to reverse course on charging performance fees after failing to make up those past losses and then go on to lose significant additional capital. Plotkin is quoted in the article as saying, "I am sorry. I got this one wrong. I made a mistake. I apologize."
You've got to be kidding me.

That a UBS analysis cited at Bloomberg News shows that April is on pace to see the largest aggregate crypto-ETF outflow on record, as investors have pulled more than $417M in funds from said ETFs month to date.

Stand alone retailer Kohl's ( KSS) moved 5.28% higher on Monday as the New York Post reported that Simon Property Group ( SPG) and Brookfield Asset Management ( BAM) had put together an offer (bid) worth more than $8.6B for the shares. Kohl's, readers may recall, has been under some pressure from activist investors seeking to take control for the company's Board. In response, Kohl's has hired Goldman Sachs ( GS) to help with finding parties interested in an acquisition.
As recently as March, Kohl's has indicated that the company has been in contact with more than 20 interested buyers, and that in February had rejected a $64 per share bid from Acacia Research ( ACTG) . More recently, there have been reports of a $9B ($69 per share) offer made by the owner of Franchise Group ( FRG) . Hudson's Bay, the owner of Saks Fifth Avenue, is believed to have indicated interest as high as $70 per share.
When will we know? Possibly quite soon. Kohl's will hold its annual meeting of shareholders on Wednesday, May 11.