Now comes the real tug of war in the market. The mega-cap fan faves Microsoft (MSFT) and Alphabet (GOOGL) disappointed and we know they are the index movers. Can the rest of the market live without them?

First of all, from yesterday we already know that we were heading into a short-term overbought reading in the latter part of the week so a pullback is not out of the question. You can see it much more clearly on the chart of the Overbought/Oversold Oscillator today. Yesterday the Oscillator was peaking over the zero line. It is now solidly there.

I have also noted that the McClellan Summation Index is rising. It needs a net differential of -4,000 advancers minus decliners on the NYSE to halt the rise. That's a good cushion but it's also what makes it short-term overbought.

You can see it more clearly when I use volume for the Summation Index. I calculate what it will take volume-wise to halt the rise. In this case it would be approximately a net negative of five billion shares (up minus down volume). That is quite a lot as you can see on the chart. 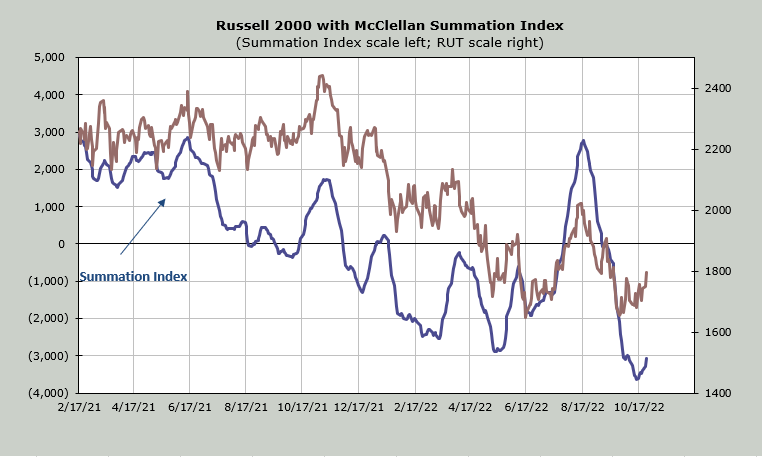 Point B was late May and we milled around at the top of the rally for a few days but again, we rolled over. Point C occurred in late July/early August and we rallied for about another week or so before rolling over. 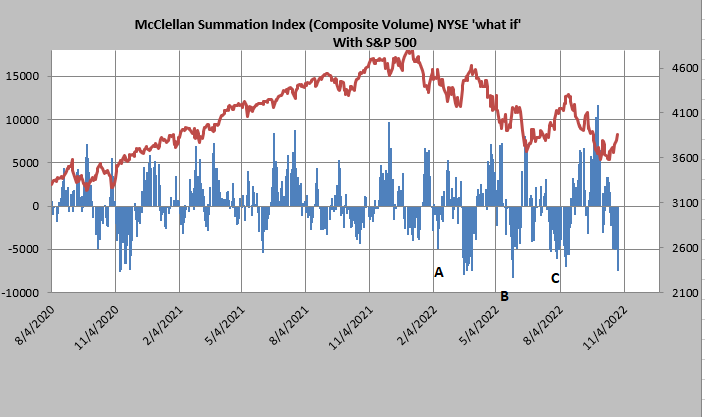 I have not yet figured out which one this is closest to but I do know that to get a rollover in the market we tend to need the Summation Index to get weak enough to roll over. And that usually requires a pullback and another rally attempt that has crummy breadth.

After all, the number of stocks making new highs on Nasdaq did move up to levels not seen since March/April. 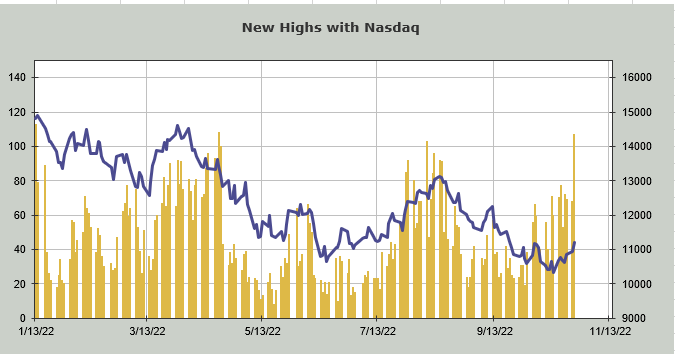 My real issue with this market is that it seems to me sentiment has gotten too bullish too quickly. Perhaps the earnings news and a pullback will help that situation but when the S&P 500 is up 10% and everyone starts jumping on the rally bandwagon -- after we're up that much -- I get concerned.

The 10-day moving average of the equity put/call ratio is already down to the mid-60s (from a high of 0.80) this month. I realize everyone thinks the rally started last week but it started in early October. This indicator bottomed at 0.56 in mid-August so if you think about it like that, we're already halfway there.

I expect when we see some of the surveys out this week they will provide a similar message, that folks were quick to jump on the rally train and they did most of it in the last week or so. For now I think we should see a pullback and another rally attempt.

Let's see how fast the bears come out should we pull back.

Get an email alert each time I write an article for Real Money. Click the "+Follow" next to my byline to this article.
TAGS: Earnings | Indexes | Markets | Put Call | Stocks | Technical Analysis | Trading | U.S. Equity