By STEPHEN GUILFOYLE Jul 05, 2022 | 06:43 AM EDT
Stocks quotes in this article: MU, AMD, NVDA, MRVL
The situation is this.
U.S. markets open on Tuesday morning are coming off of a three-day holiday weekend that came after a very poor week, but a strong day on Friday. There was green across the screen on Friday. All of your favorite, and even your less-than-favorite equity market indexes shaded green as did all 11 S&P sector-select SPDR ETFs, for one day at least. The hard reality would be that even with markets green for the day, trading volume, with bond markets closing early on Friday, and the end of month/quarter/half activity now over, simply dried up. There was really nothing to be taken away from what passed for price discovery on Friday that would suggest any level of institutional conviction in that rally. Except of course, the charts themselves.
The broader market turned in the worst first half of a year since 1970. We all know that by now. Covid-related lockdowns in China, and Russia's absurd invasion of Ukraine have created prolonged scarcities in the supplies of raw materials, the flow of finished and unfinished goods, and both agricultural and energy commodities. Mistakes had been made domestically, that would set up vulnerabilities to such conditions. Hence, torrid consumer- and producer-level inflation that forced an aggressive response from U.S. and global monetary authorities.
Consumer behavior changes. Economic activity slows. Bubbles collapse. Margin compresses.
Four-day work week ahead. Almost no earnings, But dude, it's June "Jobs" week. Oh, yeah.

Last week's change came about due to what some who had missed the signs finally saw. An economy either already in, or banging on the door of economic recession. As Personal Spending for May disappointed, as Construction Spending for May printed in outright month-over-month contraction, and as the June ISM Manufacturing Survey for June showed both New Orders and Employment in contraction, the Atlanta Fed revised their GDPNow model for the second quarter... twice.
On Thursday, the Atlanta Fed took their real-time snapshot for Q2 from +0.3% to -1.0% (q/q, SAAR). On Friday, the model was taken lower still, from -1.0% to a rather ghastly looking -2.1%. The buffoons will still show up in the financial media and try to tell you that a recession is not their "base case" for this year, or that a recession is "possible" this year. What do you think? With Q1 already in the books at -1.6% and Q2 cooking at -2.1%? You think recession is "possible" this year?
This is why I avoid anything that economists and strategists representing large firms say -- it's all scrubbed by legal departments. You and I will never really know what these individuals really think, or if they even think.

While investors rushed into Treasury securities last week, they rushed out of semiconductor stocks. On the bright side, while the entire yield curve was pressured, which would flatten the slope should the Fed continue to push out the short end (a given), the U.S. 3-Year and 5-Year Notes un-inverted against the U.S. 10-Year. I see the 10-Year paying 2.89% this morning after ticking at 2.8% on Friday.
On semiconductors... Micron Technology ( MU) posted a decent enough quarter on Thursday night, along with much weaker-than-expected guidance. The entire group took a beating. The Philadelphia Semiconductor Index gave up 3.83% on Friday alone, and a whopping 9.56% for the week.
Sarge names Advanced Micro Devices ( AMD) , Nvidia ( NVDA) and Marvell Technology ( MRVL) were down 15.4%, 15.2% and 11.8%, respectively (for the week), as hopes dwindled that U.S. legislators would grasp both the opportunity at hand and national security priority that passing a $52B bill in focused spending is. I would think that relocating large swaths of this industry back to the U.S. would be a legislative priority. Call me kooky.
That said, it is my extremely biased opinion that these three names specifically are poised for an upside catalyst such as a reopening of the Chinese economy, a thawing of U.S. trade relations with China, and/or a legislative wake-up call in D.C.

Stay Inside The Lines 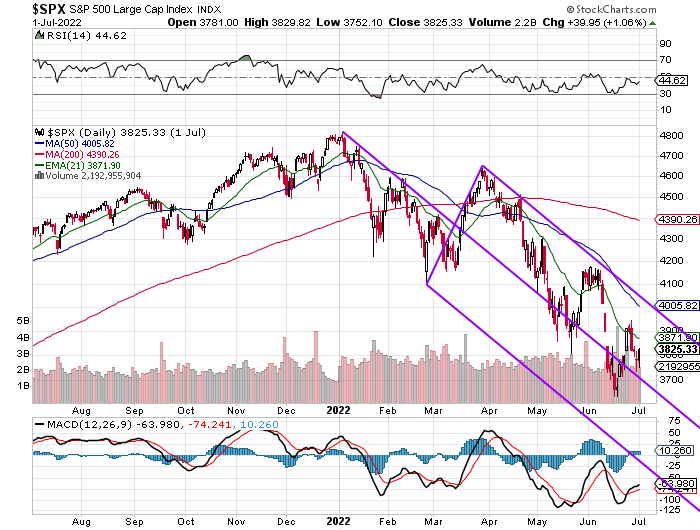 I am not looking all that far out. Santa can wait, as can back to school and the annual gnashing of equity teeth that comes with autumn. I am strictly talking about July. June was tough. The S&P 500 gave up 8.4%, the Nasdaq Composite an uglier 8.71%. For April, May, and June, the Nasdaq Composite surrendered 13.3%, 2.1% and 8.7%, in that order. Ugly.
Earnings season kicks off in about 10 days. It does not look to the plain eye that analysts are ready. It does not appear that margin compression has been properly worked into corporate profitability models even if financial markets certainly look to have priced in these realities.
Above, the reader will see that the S&P 500 has been in a downturn since very early January. Not truly technically oversold, the index has managed since mid-March to largely trade within the confines of the upper chamber of this downward-sloping Pitchfork model, until losing the central trendline in mid-June.
We see that the index has not only retaken that central trendline, but appears to have re-tested it from above. Does this suggest that a higher low has been put in? It very seriously might. There's still a lot of wood to cut. We don't know how the inflation or the policy stories will play out in the face of recession. We don't know how Russia/Ukraine plays out. We don't know how a struggling U.S. economy impacts the mid-term elections. All that said, I think (I am but a man) that July is shaping up as tradable. That may be all we can ask for. 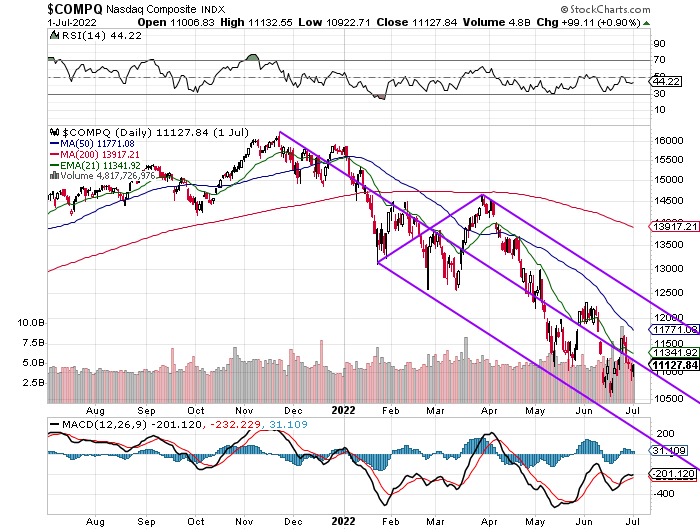 Readers will also see that, while price discovery for the Nasdaq Composite has been sloppier and has gravitated toward that central trendline, real pressure has not been exerted on either the upper or lower trendline of this Pitchfork model since formation. Again, here, I see a tradable short-to medium-term future. Relative Strength is almost perfectly neutral, and while the 12-day and 26-day exponential moving averages (EMAs) duke it out in negative territory, the nine-day EMA stands in positive territory, and has been there for a few days now.
Am I positive on equities moving forward? I am far too pragmatic to even think that I know something that others do not. I am positive, however, that until it is time to be truly positive on equity markets, which will require progress on inflation and a dovish turn by the Fed, that I can effectively enough trade these markets, while waiting to deploy my currently oversized cash allocation.

No significant quarterly results scheduled.
(AMD and NVDA are holdings in the Action Alerts PLUS member club . Want to be alerted before AAP buys or sells these stocks? Learn more now. )
Get an email alert each time I write an article for Real Money. Click the "+Follow" next to my byline to this article.
TAGS: Earnings | Economic Data | Economy | Futures | Indexes | Interest Rates | Investing | Markets | Rates and Bonds | Stocks | Trading | Treasury Bonds | Semiconductors & Semiconductor Equipment | U.S. Equity