By STEPHEN GUILFOYLE Nov 15, 2022 | 07:23 AM EST
Stocks quotes in this article: HD, SE, WMT, AAP, FDX, AMZN, AAPL
Interesting. Traders and investors really did not know just what to expect on Monday morning.
Last week had been the best market week (+8%), at least for the Nasdaq Composite, since March. More than the week's entire gain came on the week's final two days, on extremely heavy trading volume despite the fact that Friday was a bank holiday and the bond market was closed. Profit-taking would seem appropriate, at least for traders. We knew that there had been a fair amount of short-covering done. That said, we also knew that there had been more than a fair amount of professional activity, especially on the long side.
Equities wandered lower out of the gate. The New York Fed's October Survey of Consumer Expectations showed that forward-looking expectations for inflation had indeed increased. The already mentioned Nasdaq Composite worked its way to being down as much as 1.4% only at its daily nadir. Then Fed Vice Chair Lael Brainard spoke at a Bloomberg News event.
Brainard, as has been her nature in the past, sounded more dovish than have other Fed speakers, and this gave markets a late midday boost. The Nasdaq Composite and S&P 500 were both green for the day with less than an hour to go until the closing bell. That's when a series of sell programs hit trading floors up and down Wall Street. There would be no three-day winning streak, which is probably healthier going forward than if the markets just kept going higher as trading volume was far lighter on Monday than it had been late last week.
.
The key takeaway for me on Monday, as I have been supportive of the idea that after that tradeable bottom of October 13 was confirmed on October 21 and reconfirmed on November 10, would be that markets witnessed a certain level of resiliency on a "down" day.
Despite some U.S. dollar strength, and despite some selling across the Treasury yield curve. Tuesday possibly brings a more severe test, with October PPI due at 08:30 ET and three Fed speakers on tap, but seasonality (as we have mentioned) is on the side of the bulls through year's end. The Nasdaq Composite, which at this time is technically weaker than the S&P 500, has not yet suffered a retest of its 50-day simple moving average (SMA) since capturing that line on Thursday. 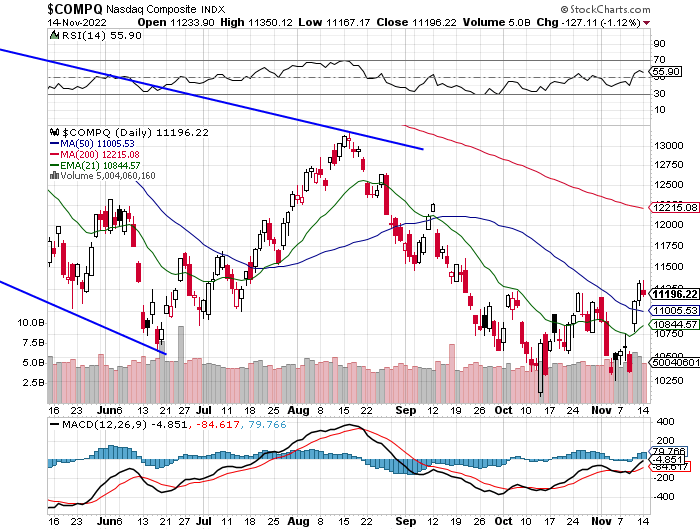 As a matter of fact, though down 1.12% by day's end on Monday, the Nasdaq Composite has not yet even tested Friday's low or Thursday's high. For now, the bulls remain in control. At least until something changes.

In actuality, when taken on the whole, Fed Vice Chair Lael Brainard did not sound quite as dovish (but still leaning that way) as her comments were made out to be on Monday. That said, Brainard certainly did not sound hawkish and did sound as if she understood that the FOMC can no longer be on autopilot and will have to start actually using their heads from this point on.
Brainard did say, "It probably will be appropriate soon to move to a slower pace of increases." She elaborated... "We have additional work to do. By moving forward at a pace that's more deliberate, we'll be able to assess more data and be better able to adjust the path of rates to bring inflation down." Keyword-reading algorithms picked up on those quotes and moved markets at the time. While that does sound dovish, Fed Funds Rate futures markets are already pricing this in, as are other financial markets.
The Vice Chair did temper those remarks somewhat as she went on... "We've done a lot, but we have additional work to do both on raising rates and sustaining restraint to bring inflation to 2% over time."

Presidents Joe Biden and Xi Jinping met on the sidelines of the G-20 meetings in Bali on Monday. Both sides expressed a desire to improve relations going forward even if nothing of dispute between the two powers has been resolved and at least that much has probably been achieved. It does appear that U.S. Secretary of State Anthony Blinken will visit China early in 2023 to try to further advance such sentiment.
As the two presidents met, there was surface-level agreement to resume cooperation on addressing such issues as climate change and food insecurity. Both sides agreed to warn Russia against the use of nuclear weapons and against loose talk about using such weapons in Moscow's war on Ukraine.
Both sides also seemed to agree to disagree on Taiwan. Xi stated that Taiwan would be "the first red line that must not be crossed in China-U.S. relations." according to Beijing, while Biden stated that "I absolutely believe there need not be a new Cold War," while also stressing that U.S. policy regarding Taiwan had not changed. Biden also expressed that the U.S. still takes issue with Beijing's treatment of its Muslim minorities and its suppression of civil liberties in Hong Kong.
So, was progress made? Talking is better than not talking, so yes. That said, neither side has given an inch on what matters to them and neither side likely will.

Anyone else notice that FedEx ( FDX) announced on Saturday the intention to start furloughing a still to be determined number of drivers starting in December? Or that on Monday, The New York Times broke the story that Amazon ( AMZN) is set to lay off 10K employees after already announcing a hiring freeze? All as we head right on into the holiday season and peak e-commerce /parcel shipping season?
Ho, Ho, Ho.

As Long as It's Not Demand-Related, Right?

Apple ( AAPL) gave up some limited ground on Monday in response to a note from J.P. Morgan. Analyst Samik Chatterjee, who is rated at five stars at TipRanks and is a big name on Wall Street, lowered his estimate for iPhone 14 sales by 5M and his estimate for other iPhone sales by 3M, taking his projection for quarterly iPhone sales down to roughly 74M  from roughly 82M . This would largely be due to Covid-related shutdowns in China that have slowed production.
Chatterjee has also taken his expectations for Apple's current quarter revenue down to $121B from $128B (consensus: $126B), and his earnings per share expectation down to $1.91 from $2.14 (consensus: $2.05).
That said, Chatterjee sees the shortfall being made up at least to some degree "next" quarter and maintains his "buy" rating while setting a $200  price target. He sees any production-related dips in the share price as a potential opportunity for investors. So do I.
CEO Tim Cook may be the best at working around these situations by now. That said, it might just be easier to manufacture most of these products somewhere else. Should have been further down that road by now.