By STEPHEN GUILFOYLE Oct 14, 2021 | 07:28 AM EDT
Stocks quotes in this article: BAC, C, DPZ, MS, PGR, TSM, USB, UNH, WBA, WFC, AA, XLU, XLF, XLE, XLK, XLC, WMT, TGT, FDX, UPS, HD, COST, MATX, AMZN
Every single one of you knows that September consumer prices ran a bit on the hot side. That's what the financial media focused on early on Wednesday morning.
Every single one of you knows that three week ago, the FOMC consensus leaned toward getting a tapering of the Fed's monthly asset purchase program underway in November.
The Minutes? Sure, but several key Fed officials have been speaking publicly on the matter in recent days. That's what the financial media focused on, late on Wednesday afternoon.
The key takeaway from Wednesday's version of the price discovery game, in my opinion, was the continuance of the mostly foreign demand for U.S. Treasury securities, particularly out on the long end of the yield curve, as those yields last week had approached levels not seen in several months.
This has compressed key yield spreads this week, such as the 3-month / 10-year...

On Wednesday, the U.S. Treasury went to market with $24B worth of long (30-year) bonds. Bid to cover was strong. Indirect bidders (foreign accounts, probably central banks) took down more than 71% of the issuance, just as they had for $38B worth of 10-year paper on Tuesday.
Have we found that sweet spot? That spot where nominal U.S. yields make the capital preservation trade attractive enough somewhere else? Sure, headline CPI is running at an annual pace of 5.4% here in the U.S. Germany put their CPI data to the tape this week as well. Their year-over-year number printed at 4.1%, Month over month? Flat. That's right. 0.0%. Europe's other big economies? France and Italy, both of which will post September data this week as well, saw August inflation running at an annual pace of 2% or so. In Japan, year-over-year inflation still prints with a minus sign.
So, yes, while supply-chain constraints are a global problem that will slow economic activity everywhere, consumer-level inflation is not yet as broad a problem, or at least not evenly distributed. Not that rates cannot go higher from here, or that inflation elsewhere cannot catch up, but for right now, and right here, I think we have found the spot where the Bank of Japan, and even European central banks, including the European Central Bank find U.S. longer-term paper attractive. Can we count on them to replace a Fed that wants to walk, as the U.S. legislature tries to increase borrowing?
Warriors, it is what it is. Don't count on anything in regards to price discovery beyond what expresses itself in terms of daily output. Algorithms have no day-to-day memory, but are capable of developing detectable habits. This is who you are competing with.

Nine of 11 sector select S&P SPDR ETFs closed in the green on Wednesday, easily led by Utilities ( XLU) as dividend payers finally got a chance this week to take a shower and change their clothes. The rotation came at the expense of both Financials ( XLF) and Energy ( XLE) , in a reverse of monthly, quarterly and year-to-date trends. The Technology ( XLK) and Consumer Services ( XLC) sectors caught a break, which produced broader market outperformance for the Nasdaq Composite and Nasdaq 100 as market breadth was strong.
Winners beat losers and advancing beat declining volume decisively at both of New York's primary equity exchanges as aggregate trading volume steadied at higher levels (but not high levels) compared to what markets experienced late last week and earlier this week.
Readers and viewers have heard me stick to my thesis that U.S. inflation is indeed "transitory," and over a few weeks, my camp has emptied a great deal as other economists have fled to the structural side of the argument. Even those who are policy decision makers at the Federal Reserve are preparing to create for themselves an environment where they as a group will be able to react with as much flexibility as possible given any eventuality in any environment. This is the appropriate stance to take. In fact, this stance is closer to late than early.

Let's take a gander at that September CPI report, shall we? Year-over-year headline inflation of 5.4%, supported by 24.8% year-over-year inflation for all things energy related. The energy print includes a number of subcomponents currently showing year-over-year inflation of more than 40%. Food related inflation is fairly hot, but below the headline, at 4.6%.
Let's take a look at vehicles. New vehicle prices are up an annual 7.3%, while used vehicles are up 24.4% over a year. Vehicle sales are strictly a semiconductor shortage story. Not to mention that in month-over-month terms, used vehicle prices have printed in contraction for two consecutive months.
Beyond energy, food, and vehicles, which even the least informed among us would have to admit even back in "normal times'' were goods that bore increased volatility at the point of sale, prices are not out of control. Medical care commodities are down year over year, while medical services are up only 0.9%. This pace is not only below trend, it's below target. Shelter? +3.2%. Services (ex-energy)? +2.9%. Apparel? +3.4%. Transportation services? +4.4%. You guys catching my drift? Away from what is currently being impacted by potentially temporary conditions of scarcity, inflation is running closer to something with a 3 handle than a 4 or a 5 handle.
I have long said that my window for transitory does not have a limit and was largely dependent upon a return to a normalized, post-pandemic environment. This could take from anywhere from months to several quarters and still retain a "transitory" identity.
In the long run, inflation will return to a pace of roughly 3% annually as green energy is far more costly than is the use of "dirtier" fuels, and the transition period (decades) will cause periodic shortages along the way. Still, on the whole 3% inflation is far better for national, regional, municipal, and households in poorly balanced debt situations than semi-permanent sub-2% inflation ever was. Kapeesh?

I hope somebody laughed. No, it was not Art Carney addressing a golf ball. It was the president of the United States marshalling the forces of the private sector to address the armadas of cargo ships full of goods in demand that sit parked around U.S. ports.
On Wednesday, President Biden met with leaders from the Ports of Los Angeles, and Long Beach, as well as leaders on the organized labor side, and with representatives of such corporate giants as Walmart ( WMT) , Target ( TGT) , FedEx ( FDX) and United Parcel Service ( UPS) . Plans were made to take U.S. ports to a seven day a week, twenty-four hour a day schedule.
Bear in mind that Walmart, Target, Home Depot ( HD) and Costco ( COST) have all been chartering their own fleets of smaller cargo ships and heading them to smaller U.S. ports as a means of getting around the congestion at LA and in Long Beach. Problem still stands that these ports are understaffed, as are warehouses and the need for qualified truckers is a problem.
My investment thesis for now is this: These bottlenecks have to at some point, unscrew themselves and there will be pressure to expedite the process as the holidays approach. Money talks and this is the money season.
As we saw earlier this week, with  maritime shipper Matson ( MATX) , those with the keys to unlocking the logistics chain will have pricing power, perhaps "transitory" pricing power, but pricing power nonetheless, even including increased fuel costs. This is why I have been buying FedEx ( FDX) off of the lows (yes, I did say that I considered FDX broken after earnings in mid-September) and UPS going into earnings.
While I still think management has been awful at FDX and the stock deserves the low multiple, I also think Carol Tome at UPS is good at her job and sees the opportunity to shine while in the spotlight.
FDX is coming along for the ride because this job is much too big for UPS alone. Words will matter more than results when UPS goes to the tape with third-quarter results in 12 days.
I currently see UPS and FDX as strong buys and am acting upon this thought. In addition, both UPS and FDX still have critical gaps to fill. 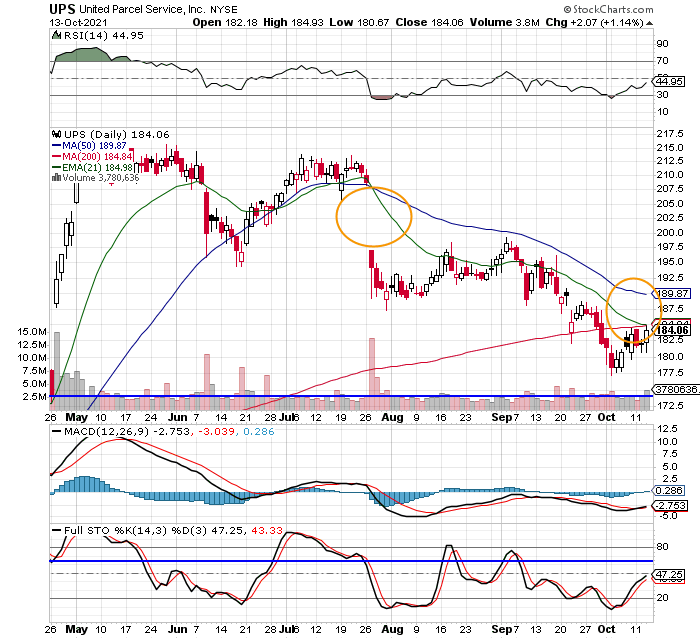 UPS faces a triple decker of potential resistance in between $185 and $190 as the 21-day exponential moving average (EMA), 50-day simple moving average (SMA) and 200-day SMA have all lined up. Only one catalyst might be needed to create enough momentum to take out all three levels. Is this such a catalyst? Have you ever seen a greater need for delivery services? In that case, I would expect algorithmic momentum to make a run at the gap created back in July. 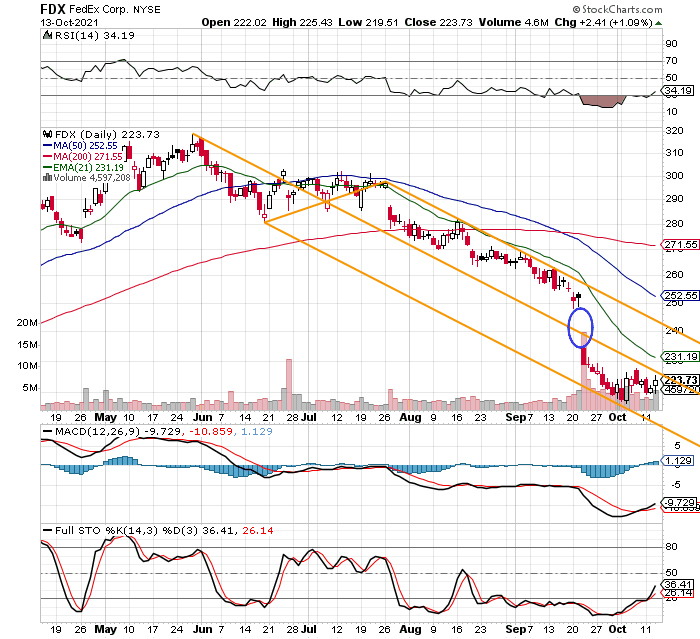 FedEx still resides in the lower chamber of our Pitchfork model as the earnings-related gap of September knocked the name for a loop. A basing pattern is currently being built in the $220 area. I expect the stock to benefit through just being in the right place at the right time.
The necessity is obvious. So are higher input costs such as labor and fuel. So, is pricing power. The day is coming when Amazon ( AMZN) tries to compete for this business. That day is not in 2021, or even early 2022.

Taiwan Semiconductor ( TSM) reported third-quarter results while you were resting that greasy melon of yours on that thing you call a pillow. Top and bottom-line beats on 22.6% revenue growth (11.4% sequentially). Gross margin up to 51.3%. Operating margin up to 41.2%. Operating expenses down to 10.1% of net revenue.
Oh, and the company guided the low end of fourth-quarter revenue expectations above consensus view. If only someone had written Real Money subscribers last Friday and told them that the stock was badly oversold and bouncing off of support. Oh, yeah... somebody did.
Rock & Roll, my brothers and sisters.