By STEPHEN GUILFOYLE Nov 17, 2022 | 07:06 AM EST
Stocks quotes in this article: BJ, KSS, M, AMAT, GPS, PANW, WSM, MU, XLE, XLK, XLY, CSCO, NVDA
July 2nd, 1863. Not a very large place. The result of a politically placed Union general's (Sickles) inexperience. Over 20K troops engaged. More than 6K never left. The field, which on better days grew wheat for a farmer named John Rose, now stands overgrown, littered with monuments to the fallen. The soul feels some innate need to read them all. Quiet. So, so quiet. One can feel the energy, the anger, the hatred, and the terror that still lives deep in that soil as one walks that field.
An awful day, the second and perhaps most brutal day (but, how does one compare?) of the Battle of Gettysburg. This field was trampled into a carpet of blood-soaked foliage, as the fighting ended up hand to hand.
That day, control of the field changed hands too many times to count. Confederate forces would take "The Wheatfield" on the 2nd, but not "Little Round Top" nor "Culp's Hill" and certainly not "Cemetery Ridge." Thank the 20th Maine and the 1st Minnesota for their sacrifice next time you whine about personal inconvenience.
The lines of the Army of the Potomac would ultimately hold that day after being tested on both flanks. The next day, Confederate General Robert E. Lee would try the Union middle. General George Gordon Meade was ready for that... and the rest shall we say, is history.
The battle was won and lost on that fateful third day. Neither Washington, D.C. nor Philadelphia would be invaded. Time tries to forget, but a nation can not -- that lines that would not break under intense pressure on the second day of the battle were perhaps just as key as what transpired on the third. Probably more so.

The Corner of Broad & Wall

It started early enough. The Census Bureau put October Retail Sales to the tape. Better than expected. Much better in fact. Nine of 13 retail categories showed monthly growth. Headline Retail Sales increased 1.3% month over month versus expectations for growth of 1%. Ex-Autos? Still up 1.3% versus expectations for growth of just 0.4%. Huzzah? Uhm, sure, but good news is bad news, remember? It's the Fed's perception of macroeconomic conditions and their perception of how fertile those conditions are for consumer-level inflation and inflation expectations that matter now. Uh, oh.
Hey, October Industrial Production and Capacity Utilization contracted versus expectation for growth! That could help. Wait, something else is coming. What's that? Micron Technology ( MU) appears to have issued a press release. Micron will apparently reduce wafer starts (production) for its DRAM and NAND memory chips by about 20% vs. the same period one year ago due to weak demand and is also planning to make additional cuts concerning CapEx. Down went the semis. Down went equity markets. Down went Frazier.
The S&P 500 gave up 0.83%, as the Nasdaq Composite surrendered 1.47% and the Philadelphia Semiconductor Index took a beating of 4.26%. Nine of the 11 S&P sector-select SPDR ETFs shaded red for the session, with Energy ( XLE) down 2.04% as Technology ( XLK) and the Discretionaries ( XLY) both gave up more than 1%. Defensive sectors took four of the top five slots on the daily performance tables.

A couple of Fed speakers hit the circuit on Wednesday. If you thought that maybe these speakers are out and about too much, just look at today's docket. Six appearances by five speakers, including the "Queen of the Hawks," Cleveland's Loretta Mester just after the opening bell. Keep your helmets on and your chinstraps buckled for that one, gang. At least after December, Cleveland doesn't vote again until 2024.
New York Fed President John Williams, who to be blunt, has never impressed me as an economist, said, "Using monetary policy to mitigate financial stability vulnerabilities can lead to unfavorable outcomes for the economy. Monetary policy should not try to be a jack of all trades and master of none." I tend to agree with that statement, but it appears to be in direct conflict with how Williams has stood on policy over his long career. Williams added, "The time is now to find solutions that strengthen our financial system without compromising our monetary policy goals. These issues are complex, but the need for meaningful progress on strengthening the resilience of core financial markets is clear."
This comes after several decades of not dissenting, not even a little bit as the central bank perverted price discovery and conditions of liquidity for the purpose of enabling irresponsible fiscal policy at the behest of the federal government, while also badly and broadly skewing risk assessment in the favor of elevated risk asset prices. These words need to be spoken, but perhaps would be better coming from someone who has not spent an entire career creating the problem.

In addition to the equity beatdown, the two Treasury yield spread inversions that matter most in terms of predicting recession both sunk to multi-year lows. The 10-Year / 2-Year yield spread went out like this:

While the 10-Year/3-Month yield spread did this: 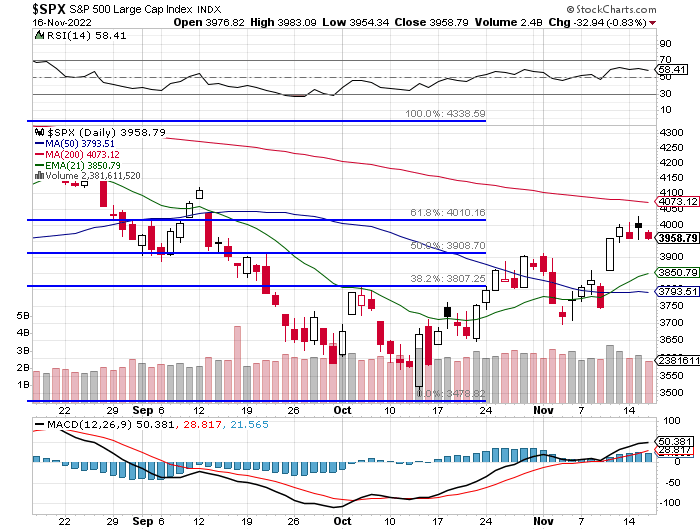 We all know that the S&P 500 has been stopped at a key Fibonacci level. We've been over this and I have shown you several versions of this chart. Now, let us zoom in to the very recent:

Since the explosive move on high trading volume last Thursday (The Marine Corps Birthday), equities have rallied further, then given it all back, then rallied further again, and then given it all back again. On Wednesday, the S&P 500's low was 3954. The lows on Tuesday, Monday and Friday? 3953, 3956 and 3944 in that order. This after a high of 3958 on Thursday. There is an intense algorithmic fight for control of this level and it has been going on for almost a week.
There is some good news. Trading volume has been far heavier on "up" days than on "down" days. Wednesday was no different. Winners beat losers by about 2 to 1 at both of New York's leading equity exchanges, while advancing volume took just a 16.1% share for names listed downtown and a 25.5% share for names listed up in midtown. The difference was that trading volume decreased 17% day over day for names domiciled across the street from George Washington and 18.4% day over day for names domiciled near good old Father Duffy.
Put bluntly, the big kids have been far more active in rallies. Selloffs have more than likely been composed more of traders taking profits, while those big kids have sat on their hands. How meaningful is that? It means that portfolio managers want to be bullish but are afraid to act on their own. Otherwise they would take advantage when shares are dropping. They need momentum. They need company.

After the closing bell on Wednesday night, both Cisco Systems ( CSCO) and Nvidia ( NVDA) reported. Cisco beat on EPS and revenue, while increasing guidance. Nvidia beat lowered expectations for revenue while missing on the bottom line. Some of the internals there as well as guidance were better than feared.
The market appeared to receive well what both of these tech giants pitched. That said, the longer I type, the more U.S. equity index futures seem to fall. Maybe I should stop. At least for now.
Housing Starts and the Philly Fed on tap. Now, drop and give me 50. Do it in sets if you have to. Victory to those who dare.