The trading was harsh enough Thursday to send several of the equity indexes back below their support levels. However, none of the near-term trends were violated.

For sure, the markets remain on volatile and shaky ground, but the detrended Rydex ratio, which forecasted Wednesday rally, dropped significantly to a level that this contrarian indicator has seen leveraged short exposure only five times in the past decade. All of those instances were followed by market rallies. The rest of the sentiment data is pointing in the same direction.

So, while extreme volatility persists as the 10-Year Treasury yield pushes higher, we are not quite ready to "give up the ghost" in our speculation that the markets are at an attractive level for those with longer-term horizons. 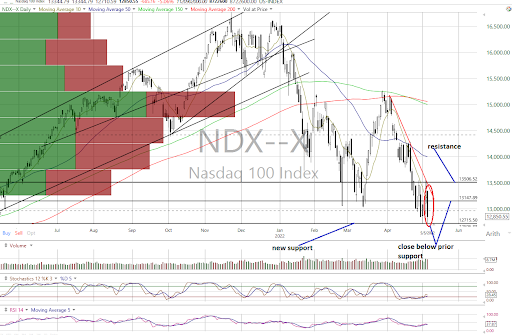 All the major equity indexes closed notably lower Thursday with very negative market internals for the NYSE and Nasdaq as all closed near their intraday lows.

While the S&P 500, DJIA, Nasdaq Composite, Nasdaq 100 (see above), Midcap 400 and Value Line Arithmetic Index closed below support, all managed to make higher intraday lows, leaving the near-trends unchanged with all neutral except the Nasdaq 100 staying negative.

Yet market breadth was weak enough to push the cumulative advance/declines for the All Exchange and Nasdaq back to negative while the NYSE's remained neutral.

No stochastic signals were registered.

The Open Insider Buy/Sell Ratio declined to 84%, remaining neutral after their active buying activity over the past several sessions.

Importantly, the most encouraging data factor for the near-term, in our view, is the detrended Rydex Ratio (contrarian indicator) that remains very bullish and dropped to -3.19. As its chart shows, below, only five times in the past decade have the ETF traders been so heavily leveraged short, all of which were followed by rallies. It is now deeper than the reading that implied Wednesday's sizable rally. 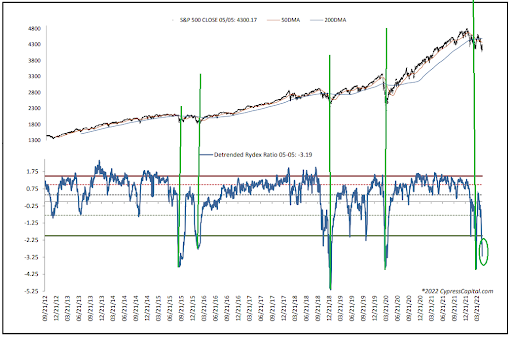 Meanwhile, this week's AAII Bear/Bull Ratio (contrarian indicator) rose further to a very bullish 2.97 and at a 20-year peak matched only by the 2008-2009 financial crisis. Crowd fear is at very extreme levels.

The forward 12-month consensus earnings estimate from Bloomberg for the S&P 500 has increased slightly to $235.71 per share. Thus, the S&P's forward P/E multiple is 17.6x with the "rule of 20" finding ballpark fair value dropping to 16.9x.

Volatility obviously persists but the sentiment data strongly suggests a return to strength.

Get an email alert each time I write an article for Real Money. Click the "+Follow" next to my byline to this article.
TAGS: Investing | Markets | Stocks | Technical Analysis | Treasury Bonds | U.S. Equity