The PPI data reported Friday morning was a little hotter than expected, which put some slight downward pressure on stocks.

We suspect the near-term may see a period of some sideways movement given the charts and data in combination with the fact that the DJIA has risen about 5,000 points from the October lows.

As such, we continue to believe that buying weakness near support is the best course of action until the charts and data suggest otherwise. Currently, that is not the case. 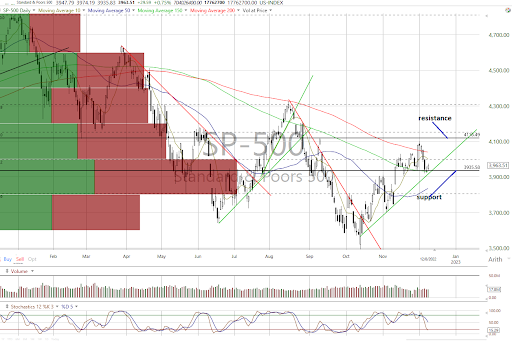 On the charts, all the major equity indexes closed higher Thursday with positive internals on lighter trading volume.

No technical events of import were generated on the charts, leaving them all in near-term neutral patterns except for the S&P 500, which remains short-term bullish.

Cumulative market breadth saw some minor improvement as the Nasdaq A/D joined the All Exchange and NYSE above its 50-day moving average with all in neutral trends as well.

On the data front, the bulk remains neutral as well.

The percentage of S&P 500 issues trading above their 50-day moving averages (contrarian indicator) moved marginally higher at 79% and is technically neutral. While still in its upper ranges, it is no longer on its prior caution signal.

The detrended Rydex Ratio (contrarian indicator) dropped to -0.86 and is now mildly bullish versus its prior neutral signal. 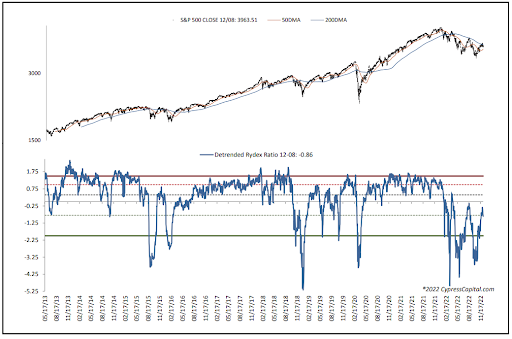 The forward 12-month consensus earnings estimate from Bloomberg for the S&P 500 dropped to $225.33 per share. As such, its forward P/E multiple stands at 17.6x while remaining at a premium to the "rule of 20" ballpark fair value of 16.5x.

When we take all the charts, valuation and data into consideration along with the fact that the markets have seen a significant rise from the October lows, we may now be in a period of sideways consolidation. We remain buyers of weakness near support until evidence appears to suggest otherwise.