For an up day in the market the chatter was pretty glum Monday. But you already know why. I mean the S&P gained 60 points while the Russell 2000 was negative.

And what about the Nifty Nasdaq? A gain of almost 300 points! Yet breadth was negative (for nine of the last 10 trading days). What's more, upside volume was a mere 50% of the total volume on Nasdaq.

Wait, you mean there was as much up as down volume on Nasdaq on Monday's nearly 300 point rise? That is correct.

And that is likely just one reason folks were sort of cranky about the market. But can you blame them? It really was a crummy day as so many stocks that gapped down Friday couldn't even manage to fill the gaps they left behind. I'd like to spin that as bullish but with what's going on under the hood, it is hard.

The good news is that sentiment is shifting. Oh don't worry, it is far from cautious but a week ago we couldn't manage a put/call ratio over 0.80 despite the deterioration under the hood and on Monday's big up day in the big-cap indexes the put/call ratio rose to 0.88. That's some caution we hadn't seen before, although it is far from extreme.

We have spent a great deal of time discussing Nasdaq's new highs and new lows, well mostly new lows lately. But we haven't visited the Nasdaq Hi-Lo Indicator in quite some time. Recall back in September and October we watched it fall and bottom at 33%. It currently stands at 29%. This is a lower low than September and the lowest reading since March 2020. 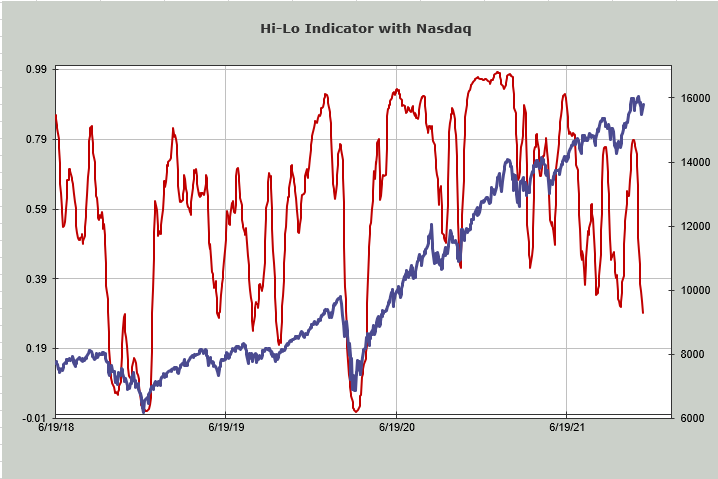 The good news is that under 20% and this is intermediate-term oversold. I will admit I do not think I have ever seen this indicator get under 20% while the big-cap indexes are flirting with new highs so I am unsure how to interpret that but I do know that if it gets under 20%, which is doable by the end of this week, it would mean the majority of stocks are oversold.

Now let's talk about the calendar.

Tuesday is the end of the month, which is often a wild card. We have seen plenty of final days of the month get whacked. But what we should note is that in 2021 the first day of the new month has typically seen positive breadth and positive breadth usually means a rally day for small-caps.

There have only been two months this year -- January and August -- when the first day of the new month did not show positive breadth. In those two months it was the second day that showed it. But we have had no months that didn't show good breadth in one of those two days.

While there is always a first time, with the market still so oversold I still think we'll see a small-cap rally this week.

Get an email alert each time I write an article for Real Money. Click the "+Follow" next to my byline to this article.
TAGS: Markets | Put Call | Small Cap | Stocks | Technical Analysis | Trading | U.S. Equity