The significant intraday reversals Thursday were quite striking with some actually testing resistance, but they left the charts still in near-term downtrends and below their 50-day moving averages. However, we are encouraged that McClellan OB/OS Oscillators remain mostly neutral with the NYSE still oversold, while stochastic levels remain oversold as well.

Thursday's action does suggest to us the possibility that the day saw a climax of selling pressure as crowd sentiment remains quite fearful. So, while the worst may be over, it does not necessarily mean volatility has left the scene.

Let's dig deeper into the charts and data. 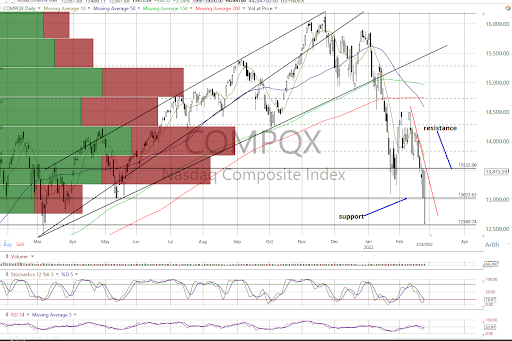 All the major equity indexes closed higher Thursday and near their intraday highs with a significant increase in trading volume as buyers flooded the scene from the start of an extremely weak open.

The very heavy trading volume plus significant bullish intraday reversals suggests to us we may have finally scene a culmination of the bulk of selling pressure.

All held support with the Nasdaq Composite (see above), Nasdaq 100, Dow Jones Transports and Value Line Arithmetic Index managing to test resistance. However, no near-term downtrend lines were violated, leaving all in negative trends.

Market cumulative breadth negative trends were also unchanged on the All Exchange, NYSE and Nasdaq.

Despite the market surge, the stochastic levels remain oversold, offering some encouragement.

We still get some encouragement from the data.

The percentage of S&P 500 issues trading above their 50-day moving averages dropped to 24%. Again, the chart below shows this level to be coincident with market rallies over the past two years. 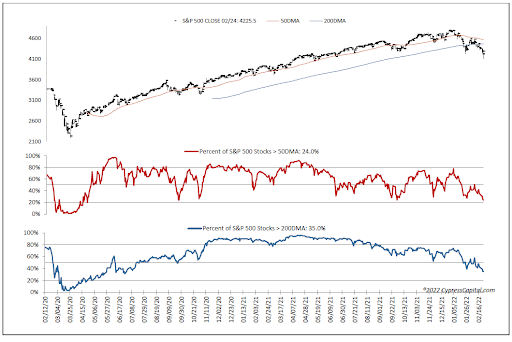 The Open Insider Buy/Sell Ratio is a neutral 38.5.

The S&P's forward P/E is near its lowest levels since April 2020 (see below). 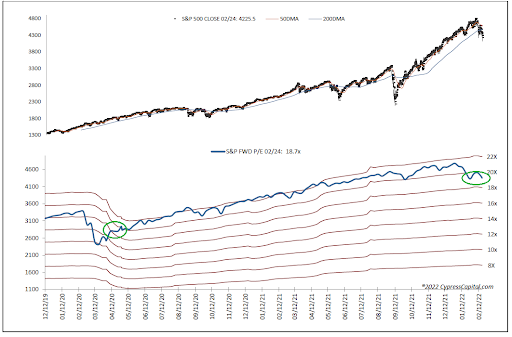 Get an email alert each time I write an article for Real Money. Click the "+Follow" next to my byline to this article.
TAGS: Indexes | Markets | Technical Analysis | Treasury Bonds | VIX | U.S. Equity