By STEPHEN GUILFOYLE Jan 19, 2023 | 07:35 AM EST
Stocks quotes in this article: CMA, FAST, FITB, KEY, MTB, PG, TFC, NFLX, PPG, TJX, DLTR
Somewhere, the wind whistles through a maze of canyons unnoticed by time. Somewhere, wave after wave of seawater pounds the sands of a thousand unnamed beaches as a thousand nearby birds greet every sunrise. Morning after morning.
Somewhere, it's all the same as it always was, and always will be. Somewhere, a tree falls silently, in a noisy world. Elsewhere, a tree that fell long ago, continues its communion with planet earth. All is as all has been.
Still, somewhere else, as those salty waves ebb and flow, an equity index, a benchmark if you will, failed at a significant line on the chart, in response to a laundry list of also failing macroeconomic data. Not so silently, the drumbeat goes on, robotically, mindlessly... the driving force behind this underperforming economic data. As if driven by spoken necessity. Or perhaps by an unspoken agenda.
Careless? Doesn't seem like it. Data-dependent? Only when it suits them.
Those drums, though. The drums of time. The drums of the wind and the sea, lacking in nuance, lacking in finesse. The forest, now lost forever behind the trees. The madness. Thump. Thump. Thump. Thump.....

On Wednesday, the complexion of the U.S. marketplace changed yet again, yet stayed the same. As the Nasdaq Composite saw its seven-day winning streak come to an end in dramatic fashion, the S&P 500 has now put together a two-day losing streak, closing just seven points above its close of January 10. That's right. Wednesday's selloff knocked more than a week of hope and good cheer out of the S&P 500 as that index gave up 1.56%.
Pick any index on our list, any one at all. As far as I can tell, they all sold off on Wednesday, save the VIX.
The beatdown was broad, across U.S. equities as all 11 S&P sector SPDR ETFs closed the session not only in the red, but all 11 closed down at least 1.21%. Losers beat winners by a roughly 2 to 1 ratio at both of New York's equity exchanges, as advancing volume took a 25.4% share of composite Nasdaq-listed trading volume and a 16% share of that same metric for NYSE listings.
Aggregate trading volume increased for NYSE and Nasdaq listings, meaning one thing. Professionals, as expected, reduced overall exposure as the S&P 500 failed to hold its 200-day simple moving average (SMA), which is the most highly focused upon moving average in our little universe. 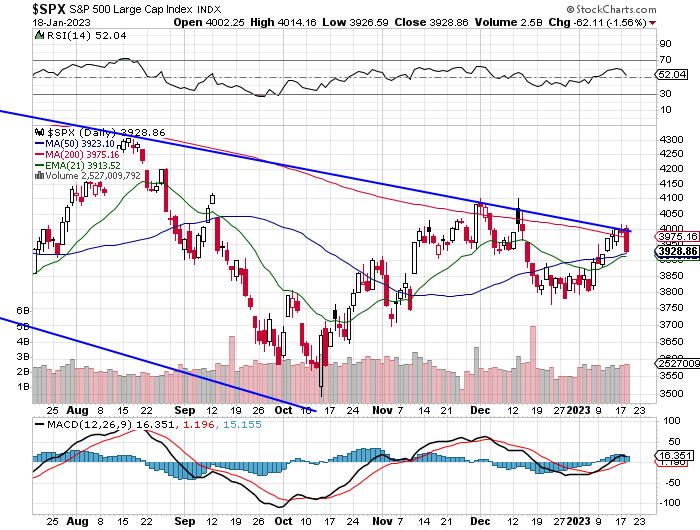 The danger now? That same S&P 500 now closed just five points above its 50-day SMA, which is the second most focused upon moving average in our little universe. A failure to hold that level, could and probably would bring about the same kind of price discovery witnessed on Wednesday.
So, why the ferocity of the risk-off Wednesday sentiment? That one is easy, my friends. There comes a time when bad begets bad. There comes a time when even a Chevy Corvette or the coolest car you can think of, is stuck in traffic on the Brooklyn-Queens Expressway. Doesn't matter what that car is capable of.

"What Have We Done?"

The December version of the PPI printed even cooler than the December prints for CPI. On a month-over-month basis, headline PPI hit the tape at -0.5% m/m, down from November's +0.2%, which was revised down from +0.3%. This came versus expectations for -0.1%. Core PPI printed at +0.1%, which was on consensus, but not really because this was also down from +0.2%, which was revised lower from +0.4.
On a year-over-year basis, headline PPI landed at growth of 6.2%, far lower than expectations for 6.8%, and down quite decisively from November's 7.3%. At the core, year-over-year PPI hit the tape at 5.5%, down huge from 6.2% and again below estimates for growth of 5.7%.
The takeaway? Inflation is obviously moving in the right direction quickly, due to drag of higher interest rates at the short end of the Treasury curve and a naturally slowing U.S. economy that this aggressive stance is clearly exacerbating.

The December headline print for Retail Sales hit the tape at -1.1% month over month, missing estimates for -0.8%. The miss was actually far greater than this as the Census Bureau does not adjust for inflation, and November was revised to -1.0% from -0.6%, so the -1.1% of December is from a lower November base than was assumed when those estimates were made. December Retail Sales ex-autos also printed at -1.1% m/m after November had been revised lower (-0.6% from -0.2%).
Scanning the laundry list of line items, we find that Department Store sales were down 6.6% month over month. In December. Let that sink in. Everyone shopped online you say? Non-store (internet) retailers saw sales decrease 1.1% month over month in December. Americans simply shopped less in December than they did in November and less in November than they did in October. Despite the holiday season. Jingle. Jingle.

Thought it couldn't get worse? Think again.
December Industrial Production printed at -0.7% month over month, missing estimates for -0.1%, and down from November's -0.6%, which was revised lower from -0.2%. Got all that? December was the third consecutive month of decreasing industrial production in the U.S. Broken out, this poor performance is in spite of Utilities Production increasing 3.8% m/m as Manufacturing Production printed at -1.3% on top of November's -1.1% and Mining Production printed at -0.9% on top of November's -1.2%.
As far as Capacity Utilization is concerned, that item hit the tape at 78.8%, down from 79.4% in November. Many readers who do not follow economic data closely might not appreciate how dramatic a move that is. Over the course of my career, a move in capacity utilization of more than 0.1% for a month has been considered to be huge. The economy is crashing. Even more incredibly, manufacturing-based capacity utilization printed at 77.5%, down from 79.5% in just two months' time.

In response to Wednesday morning's macroeconomic pukathon, the Atlanta Fed's GDPNow model revised their fourth-quarter estimate to growth of 3.5% q/q SAAR. down from 4.1%. Atlanta was forced to revise lower the component estimates for personal consumption expenditures, private domestic investment and real government spending. The Bureau of Economic Analysis will put their first estimate for Q4 2022 GDP to the tape a week from today (January 26).

On Wednesday afternoon, The Federal Reserve Bank released their Beige Book, which is a compilation of anecdotal economic observations across the Fed's 12 districts. This release comes eight times a year, two weeks ahead of FOMC policy decisions.
For this occasion, half of the Fed's regions reported no change to slight declines in economic activity. One district (New York) reported a significant decline in economic activity. In fact, New York reported the most widespread decline in economic activity since early in the pandemic. Good thing New York is so lightly populated.
Oh, and this is key. According to the Beige Book, labor markets remain tight as many employers have been hesitant to lay off employees even as demand for goods and services has slowed. This is obviously a reaction to the labor shortage that had been ever-present for the past couple of years.
When this worm turns, it's going to get ugly out there, gang. Real ugly.

"Good signs that things are moving in the right direction... That's important input into how we're thinking about where policy needs to go."
- Cleveland Fed Pres. Loretta Mester
"I still see the larger risk coming from tightening too little."
- Cleveland Fed Pres. Loretta Mester
"We're not at 5% yet, we're not above 5%, which I think is going to be needed given where my predictions are for the economy. I just think we need to keep going, and we'll discuss at the meeting how much to do."
- Cleveland Fed Pres. Loretta Mester
"We want to err on the tighter side to make sure we get the disinflationary process to take hold in the economy and push inflation back to the 2% target."
- St. Louis Fed Pres. James Bullard
"Should move as rapidly as we can" in regards to getting the Fed Funds Rate above 5%.
- St. Louis Fed Pres. James Bullard
"Can't make this stuff up."
-Your favorite infantry NCO, economist, trader, investor and pal.
Just a heads up. Fed Funds futures trading in Chicago are now pricing in a 95% probability for a 25 basis point increase on February 1, and a 77% probability for another 25 basis point hike on March 22. This market now also sees two rate cuts totaling 50 basis points made prior to years' end, meaning, if that is correct, short-term rates end 2023 right where they are now.

I still like two retailers in this tough and getting tougher environment for budget-minded consumers.
Those would be TJX Companies ( TJX) and Dollar Tree ( DLTR) .
I sold my TJX on Wednesday. Not that I have soured on the name, but I was up 27% on the trade and I am a mercenary at heart when it comes to trading. I can wait for the stock to come in with the market in order to buy the shares back.
Being down 2% in DLTR, I tried to add to that position on Wednesday, but failed to get my price. There's always Thursday. 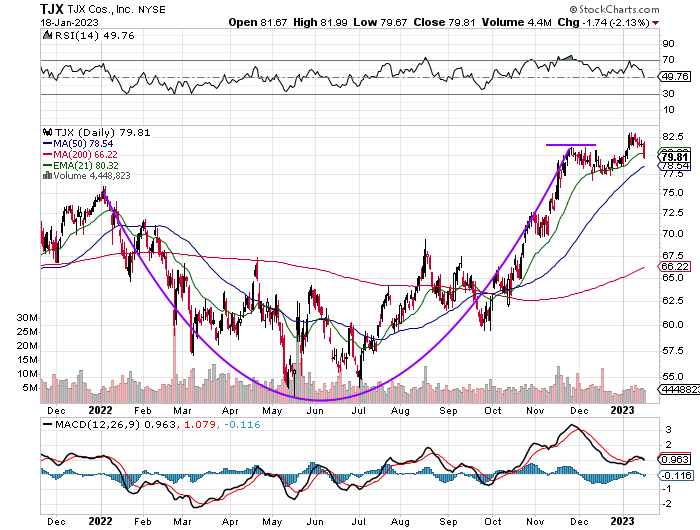 Readers will see that TJX had built a nearly year-long cup pattern that never really developed a proper handle. A solid handle would have put the pivot at $81. Hence, the recent attempt at a breakout has failed with the failure of the S&P 500 at its 200-day line. My intent is to re-initiate with a partial at the 50-day SMA ($78) and save enough dry powder for a potential retreat to the 200-day SMA ($66). Hopefully, it never gets there.
Remember that in operating chains such as TJ Maxx and Marshalls, TJX benefits from the inventory glut-related mishaps of others and then caters to that budget-minded consumer that we were talking about. TJX is a buy in a tough environment, but it still trades at 25 times forward-looking earnings. I would love to see that at 21/22 times.