By STEPHEN GUILFOYLE Nov 22, 2021 | 07:42 AM EST
Stocks quotes in this article: A, ZM, XLE, XLF, XLY, XLK, BBY, WMT, TGT, COST
Overnight, euro valuation picked up right where they left off on Friday, trading well below $1.13 in U.S. dollar terms. Yields for sovereign 10-year paper fell across the continent.
This morning, Austria went back into a full national lockdown in response to the surging pace of new Covid infections. That economy will slow by mandate as restaurants, bars, theaters and non-essential retailers must shut the doors for at least 10 days. While Austria is the first European nation to go back into lockdown, the infection now appears to be growing across northern hemisphere nations, including North America, especially in areas where humans gather indoors more than they do outdoors for the winter months.
To top things off, the Austrian government, with 66% of its population currently fully vaccinated, has made vaccination compulsory for its citizens by Feb. 1. Not to rattle any cages, but 66% is the lowest vaccination rate across Western Europe. The U.S.,  by comparison, is roughly 59% fully vaccinated, and has typically, over the past almost two years now, run four to five weeks behind Europe on Covid trends.
Protests against the idea of renewed or increased lockdown restrictions were seen over the weekend in the Netherlands, Italy, Belgium. Poland, and Northern Ireland. In fact, in Rotterdam, police opened fire on demonstrators, resulting in injuries.
Elsewhere, it appears that supply-chain bottlenecks may be starting to ease up a bit, just as lockdowns may possibly take the gusto out of global consumer demand. Meanwhile, President Biden has still not decided whether to renominate current Fed Chair Jerome Powell, or pick a successor such as current Fed Gov. Lael Brainard.
In addition, the "Emerald City" may have been a work of fiction, but El Salvador really does have plans to build a "Bitcoin City" that will include residential and commercial areas, and an airport. Energy will be provided through geothermal means by the Conchagua Volcano (what could possibly go wrong?). There would be no taxes outside of a value-added tax, and the city will appear as a Bitcoin symbol from the sky. Just an FYI, the twin-peaked Conchagua has active fumarolic areas on both peaks, but has never erupted, at least not in recorded human history.

U.S. equities were driven in two directions, as both the Nasdaq Composite (+1.24%) and Nasdaq 100 (+2.31%) surged to new record highs, the S&P 500 (+0.32%) just kind of noodles along near all-time highs, while blue chips (DJIA -1.36%) , transports (DJTA -1.45%), and small-cap (RUT -2.85%) to mid-cap stocks (S&P 400 -1.08%) all took a nasty beating as the pandemic once again threatens global economic growth, and while intelligence sources outline the possibility that Russian forces could once again threaten Ukraine.
For the week, seven of 11 S&P sector select ETFs shaded into the red, with Energy ( XLE) falling precipitously (-5%) as fossil-fuel commodity prices did a swan dive off of the high board. Financials ( XLF) also took a pounding (-2.81%) as foreign investors flooded into the long end of the U.S. Treasury spectrum seeking haven.
While it would be true that Consumer Discretionaries ( XLY) led performance for the week, at up 3.74%, this performance could be seen as somewhat deceptive. Thirteen of 21 industry groups within the sector saw their mini-indexes close lower, as tremendous upward movement in price discovery for electric vehicle manufacturers and home improvement retailers skewed sector performance in general.
Outside of these anomalies, Tech ( XLK) outperformed everything else, and defensive-type sectors easily outperformed sectors more cyclical in nature. Breadth remained rather poor for most of the week, betraying a marketplace that clearly illustrated at least some mild professional distribution ahead of the coming holiday week.

This will be one of those weeks that anyone providing for themselves and their families through either P/L performance or through the driving of commission-based revenue truly dreads. This is a factor that impacts this industry far more than most others as the financial industry is far more performance driven and far less salary supported than almost any other. A short week, where a national holiday not only removes one full session from the opportunity stack, but also severely hampers a second session, is not exactly something these folks look forward to.
To simplify, let's say a trader knows that he or she has to net $1K per week in order to pay the bills and eat. That's $200 per day that must be earned. Take Thursday out of the game, now that trader must average $250 per day. Make Friday an uncertain variable? Now, that trader must earn $333 per day through Wednesday, or go into a shortened, illiquid session on Friday swinging for the fences. I have seen, and I am sure you have too, some awful mistakes made over the years for this reason. The fact that this holiday occurs late in the month, and most commission brokers and semi-independent sales traders bill their clients monthly can only exacerbate the potential for desperation.
This Wednesday will by far be the most impactful day of the week from a macroeconomic perspective. On Wednesday, market participants will be pelted with Durable Goods Orders, Personal Income and Outlays, October data for PCE inflation, which is what the Fed is talking about when they speak on inflation, a revision to Q2 GDP, and weekly data for jobless claims, as well as inventory levels for oil, gasoline and natural gas. In addition, many expect that President Biden will make the call on his Fed Chair ahead of the Thanksgiving holiday, so keep that in mind. This Tuesday is the only heavy earning release day of the week.
After that, it's turkey, football, hopefully some family depending on one's pandemic situation. Then it will be on to Black Friday (and Cyber Monday). Just looking at the balance sheets of several retailers, they do appear to be better prepared in terms of inventories built than many had thought for a potentially tough season.
Bear in mind, though, that this could be a tricky holiday season to predict. Overall holiday spending is expected to increase between 5% to 7% over 2020. However, that includes projections for growth of 15% or greater for six-figure income households, and an outright contraction in holiday spending of 20% or greater for households earning less than $50K as these households will obviously have a tougher time traversing 2021's elevated consumer price regime. Food for thought.

Best Buy ( BBY) reports this Tuesday (tomorrow) morning. Wall Street is looking for something in the neighborhood of $1.93 (EPS) on $11.5B (rev). Both would be year-over-year contractions. However, just last week, both Zachary Fadem of Wells Fargo and Christopher Horvers of J.P. Morgan sort of threw in the towel and increased their price targets for this name. I can't say that either was truly bearish, but both are five-star rated (at TipRanks) analysts and both rate BBY at their firm's equivalent of a "hold."
The shares, one might say, are running into earnings, up roughly 30% over six weeks, but the fact is that BBY is also up only about 6% over six months. Fact is that the whispers are hot -- $2.15 to $2.20? Possibly. The stock is rather cheap, trading at 14 times forward-looking earnings and at 0.66 times trailing sales.
Best Buy posted $2B in operating cash flow over the past 12 months and runs with a current ratio of 1.2, which is stronger than Walmart ( WMT) , Target ( TGT) , or Costco ( COST) .
Taking a look at the balance sheet, one sees that CEO Corrie Barry, who only took the job months ahead of the pandemic, has been doing her job well. The company built up inventory levels (to $6.4B) some 50%-ish throughout the second quarter, well ahead of, and more aggressively than the competition.
Just my opinion, but there is a good chance that Best Buy is going into the holidays in tremendous shape. 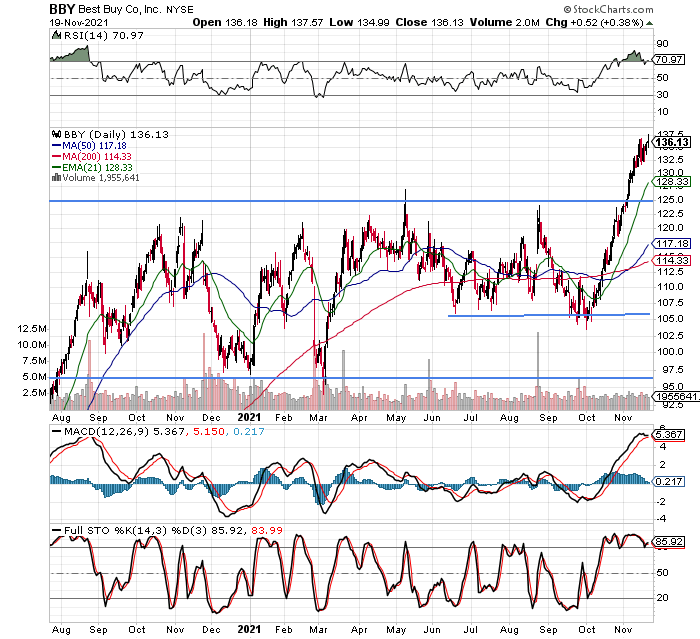 Technically, readers will see a basing period that extends back to at least June. Though one might be able to pick out a few cups and saucers individually, the fact is that this base really goes all the way back to September 2020. That's how long these shares have traded sideways -- until recently. Overbought? Short-term? No doubt. The shares broke out from a $128 1/2 pivot in early November.
On that move, I would place a price target of $158, which is about a 16% move from Friday's closing price. My loose plan would be to buy these shares down to pivot, and panic (if necessary) at $125, which would be an 8% discount to $136. Of course, there are steps one might take to impact their net basis, which also impacts the panic point.
Why am I only telling you about BBY now? I had not been in the name in a long time (I am still not), and only did some work on the name because they report this week.

(minimal lots) (strikes, expirations and premiums will have to be adjusted for real-time market prices)

Not so much cash?

After the Close: ( A) (1.18), ( ZM) (1.10)
(WMT and COST are holdings in the Action Alerts PLUS member club . Want to be alerted before AAP buys or sells these stocks? Learn more now. )
Get an email alert each time I write an article for Real Money. Click the "+Follow" next to my byline to this article.
TAGS: Bitcoin | Earnings | Economic Data | Economy | Federal Reserve | Indexes | Markets | Trading | Treasury Bonds | U.S. Equity | Cryptocurrency | Coronavirus

The S&P's Forward Valuation Remains Stretched as Insiders Lighten Up