However, investor sentiment still finds the crowd terrified with the detrended Rydex Ratio at leveraged short levels seen only four times in the past 10 years, all of which were followed by significant rallies (see below).

We expect some consolidation of gains over the very near term. 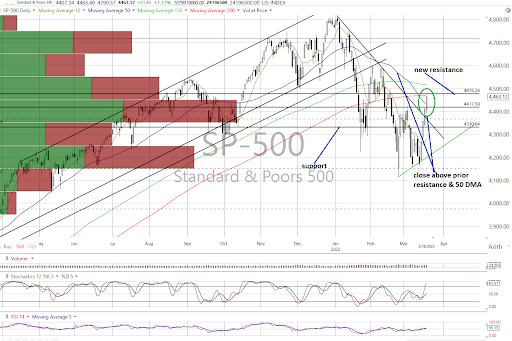 All the major equity indexes except the Dow Jones Transports closed higher Friday with positive internals on heavy volume. All closed at or near their intraday highs with the S&P 500 (see above), Nasdaq Composite, Nasdaq 100, MidCap 400, Russell 2000 and Value Line Arithmetic Index closing above resistance.

Also, the S&P, DJIA and Nasdaq Composite closed back above their 50-day moving averages, leaving all the charts in near-term uptrends.

Market breadth was strong enough to lift the cumulative advance/decline lines for the All Exchange, NYSE and Nasdaq positive as well, confirming the chart action.

However, all stochastic levels are now overbought but have yet to flash bearish crossover signals.

The McClellan 1-Day Overbought/Oversold oscillators are very overbought, suggesting some pause/consolidation over the near term, in our opinion (All Exchange: +102.65 NYSE: +103.29 Nasdaq: +104.55).

The detrended Rydex Ratio (contrarian indicator; see below) slid to -3.95, showing leveraged short exposure levels seen only four times in the past decade, each of which was followed by a significant rally.

The detrended Rydex Ratio is -3.95 (Bullish) 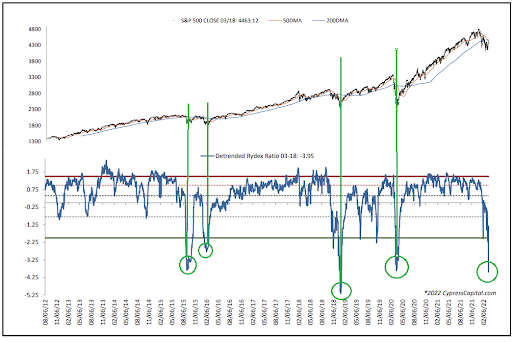 The forward 12-month consensus earnings estimate from Bloomberg for the S&P 500 increased slightly to $228.00 per share. As such, the S&P's forward P/E multiple is 19.6x with the "rule of 20" finding ballpark fair value around 17.9x.

Last week's 6% gain for the S&P 500 was the largest percentage weekly gain since November 2020, and a confirmation, in our view, of the sentiment signals discussed in our recent columns. Yet, while the sky has brightened significantly, the OB/OS and stochastic levels imply some pause/ consolidation over the near term.