While some new closing highs were achieved, all the equity indexes closed near their lows of the day Tuesday, creating some potential near-term topping candlestick chart signals. Near-term trends for the indexes all remain positive as do the cumulative advance/decline lines.

However, the data is still sending some cautionary signals from the detrended Rydex Ratio versus the Insider Buy/Sell Ratio as discussed below. 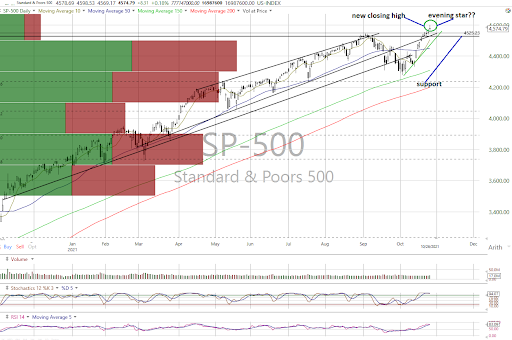 The major equity indexes closed mixed Tuesday with generally negative internals as all closed at or near their lows of the day.

Of note, all closed near their intraday lows with generally negative internals.

While the S&P, DJIA and Dow Transports made new closing highs, the S&P (see above) plotted a potentially negative candlestick chart pattern called an "evening star." Briefly, it is a three-day pattern where the first day sees decent gains followed in the next session where the chart gaps up, runs but ends the day back down near or below its opening level. If, on the third day, the chart closes well within the range of the first day's trade, the pattern is complete and suggests a short-term top. Wednesday's close will determine if the pattern will be completed.

However, all the charts remain in near-term uptrends and above their 50-day moving averages as market cumulative breadth remains positive as well.

The stochastic levels that remain overbought weakened a bit but have yet to register bearish crossover signals.

As we noted here, the detrended Rydex Ratio (contrarian indicator), measuring the action of the leveraged ETF traders, moved into bearish territory as they extended their leveraged long exposure. It remains bearish at 1.16.

In contrast, the Open Insider Buy/Sell Ratio sees insiders intensifying their selling to a bearish 18.2 and near peak levels of selling activity via this indicator. While not perfect, their relationship suggests some caution is warranted.

The 10-Year Treasury yield closed lower at 1.62%. Its uptrend remains intact with resistance at 1.70% and support at 1.47%. In our opinion, this trend could prove problematic for equities.

The cautionary signals discussed above suggest we keep out "neutral" near-term macro-outlook for equities in place.