On Monday, there was but one theme: "Risk-off." Equities sold off hard along with most industrial commodities as well as cryptocurrencies. Haven was sought in U.S. Treasuries and gold. For the most part, these themes reversed with about forty minutes left in Monday's regular session, and that set up an almost "risk-on" overnight.

European equities rallied through the wee hours alongside U.S. equity index futures. Industrial commodities rebounded. Gold stalled while traders took profits across the longer end of the U.S. Treasury yield curve. Cryptos seem unsure of where to go from here.

There is but one question that traders and investors alike must ask themselves this morning: "Can you become comfortable with being uncomfortable?" You might have to.

Equity markets fell for the most part on Monday for a myriad of good reasons, but still, even with a VIX that peaked just below 29, and a CBOE Total Put/Call ratio, which on Monday reached a level not experienced since October 2020, the "buy the dip" crowd did show up.

There are plenty of reasons to doubt the fortitude of the dip buyers. I am certainly at renewed cash levels that had as much to do with my need to be away from the marketplace for several days as it did my ability to peer into any imaginary crystal ball. That said, we have been warning here for weeks that trouble was on the horizon as autumn beckoned a nation of unvaccinated children back to "in-person" schooling.

This market volatility, while indeed very much still a Covid story, as it now appears that third-quarter earnings that have already been revised higher may be a little tough to reach, is much broader than just being a Covid story.

There are many ingredients on the kitchen counter this week, as we cook up whatever we can come up with. Earnings expectations, while providing a reason to take something off, have not provided the catalyst. The catalysts, however, are many.

Mix in the Evergrande story. At first one thinks of "Complexity Theory." How involved are U.S. or global banks? Are they involved at all? It appears not tremendously. Large interest payments are due this Thursday for the Chinese giant that will in all likelihood, be unable to make those payments. Beijing may allow Evergrande to fail. That's at least part of the rub.

The real impact on the global marketplace from the world's second largest economy has been the re-imposition of power as a priority over performance as the authoritarian regime in Beijing reasserts command over demand as the driver for domestic input, and thus global output.

China cannot be the engine that global economies have relied upon if its goals have shifted back toward pulling power away from even its own leading businesses. This is a main reason why even U.S. tech companies have come under pressure.

With Chinese tech coming under new regulatory scrutiny almost daily, how much can they participate beyond Asia? With wealthy Chinese business leaders ducking for cover, how aggressive can they be in growing their businesses elsewhere? This impacts cryptos as well.

Beijing knows that wealthy individuals will try to move wealth elsewhere. In order to prevent capital flight, Beijing attacks the miners and cryptocurrencies themselves.

While cryptos do need to be regulated, what has been done here, seems to be a potential blunt to the conversion of yuan into something more mobile, to include reserve fiat as well as the world of cryptos. Hence the seeming abdication of international participation.

Beyond China. Beyond seasonality. There are the twin mountains of domestic U.S. fiscal and monetary policy to contend with.

The Federal Reserve's FOMC goes into session on Tuesday. By Wednesday afternoon, there will be an official policy statement, new economic projections (that rarely if ever can be taken seriously) and a press conference.

While U.S. (and global) economic growth has slowed of late, the economy (thanks to artificial life support) has not fallen completely out of bed. While both producer and consumer-level inflation remain hot to the touch, there is clear evidence that at least a significant portion of what has driven these rising prices is indeed going to prove "transitory."

The Fed needs to get the show on the road as far as being in a position to provide accommodation at some point in the short to medium term future given uncertainties around the pandemic as well as forward-looking U.S. fiscal policy. Hence, on Wednesday, Jerome Powell and crew will have to at least pave a road toward triggering a reduction in the pace of the central bank's monthly asset purchase program this year.

Enough Fed officials see second-half 2022 as the point where policy would be neutral enough to tighten or loosen as a means of responding to underlying economic conditions. If they can pull off an aggressive tapering, they will indeed "go there." That's a big "if."

This while U.S. legislators play politics with both the debt ceiling as well as the forward-looking federal spending. I don't see the need for such foolishness to be honest. There should not be a debt ceiling. It has never worked as intended, prevents nothing, and the level is arbitrary. I say this as a well-known fiscal conservative. Pulling numbers out of the sky that cause periodic government shutdowns is just plain ridiculous, causes market disruption, and forces errors in risk management. As for the trajectory of fiscal policy, there is absolutely no certainty to bank on whatsoever.

We know that both sides (or enough folks on both sides) agree on the necessity of passing the $550B to $1T infrastructure package, yet that package remains prisoner to the much larger social spending framework that will in all likelihood pass in some way shape or form. The politics are in the way, the shape and the form.

Fiscal conservatives and political moderates see $3.5B as exorbitant. The progressive left sees that number as already being a compromise as their wish list amounted to something along the lines of $6T.

There is no support for this package from the right at all, meaning that to pass through the process of reconciliation, not a single vote across the Democratic party caucus can be lost, and only then, might Vice President Harris cast a tie breaking vote in the U.S. Senate. All this puts extraordinary power in the hands of a select few moderates who will have to be placated by the far left in order to get anything across the goal line.

... that we bulls wobble." So, it is that the earth below becomes more like quicksand, which by the way, is much quicker in reality than seen in the old movies. I mean the guy in front of you can disappear in seconds. Same with the marketplace.

Early on Monday, Tarleton's troops offered no quarter. The Nasdaq indices and the small-caps were hit the hardest. All 11 sectors closed in the red. The top-four performing sectors were all defensive in nature. The bottom three were all cyclicals.

Losers beat winners by a rough 5 to 1 at both the Nasdaq and the NYSE. Declining volume obliterated advancing volume by almost 4 to 1 at the Nasdaq, and by almost 9 to 1 at the NYSE. Aggregate trading volume declined from Friday, which is misleading as Friday was a "triple witching" expiration event. (Remember, there are no more quadruple witchings, people keep screwing that up.)

The fact is that the marketplace (yes, even with this attempted rally expected on Tuesday morning) is undergoing a period of professional distribution. The gap lower opening on Monday morning forced both the S&P 500 and the Nasdaq Composite below their own 50-day simple moving averages: 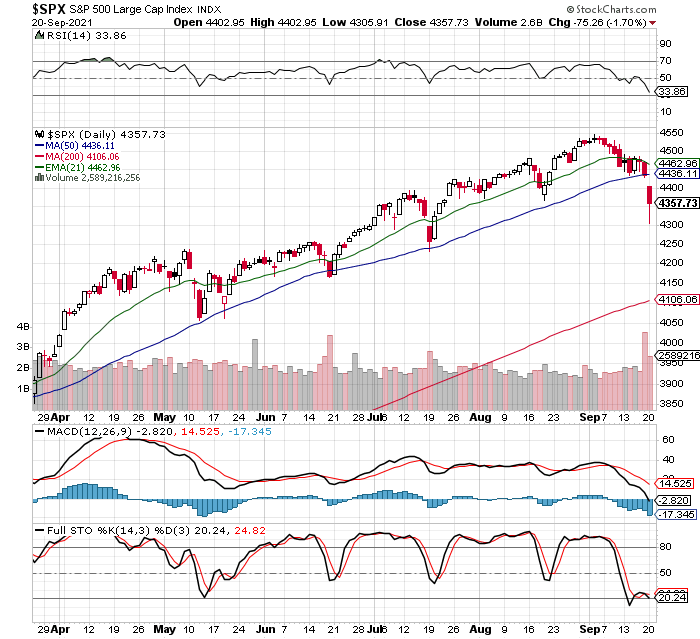 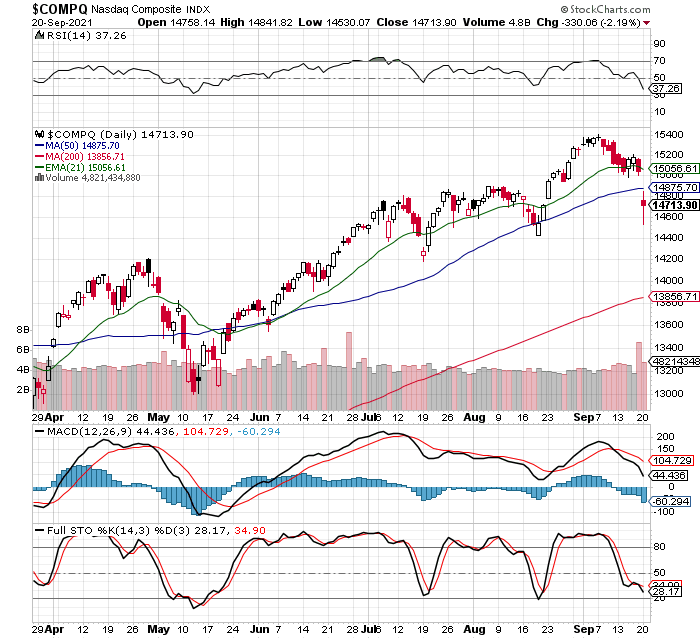 This "technicality" forces a certain number of risk managers to compel certain portfolio managers to reduce exposure, which is why the selloff on Monday morning was so severe and carried into the afternoon. This is also why the selling dried up with about forty minutes left in the session, and dip buyers were able to make such a dramatic impact as the closing bell approached.

Understand that the algorithms that control the point of sale in 2021 will try to fill those new gaps. Understand also, however, that while the S&P 500 appears oversold according to the Full Stochastics Oscillator, that condition is not yet confirmed by Relative Strength. As for the Nasdaq Composite, neither of these two indicators is quite there just yet.

That said, the S&P 500 has made a lower low, and that is a factor in changing trend confirmation. The Nasdaq Composite has not made a lower low. Either capital will flow back toward tech or there is room to the downside.

This morning's pop? We won't know for sure until the flippers flip. Understand? The kids that jumped in late Monday are not investors, they are traders and they will trade.

Components of the Nasdaq Composite have exceeded their aggregate 50-day trading volume SMA in seven of the past nine sessions. Six of those seven sessions were "down" days for the index. For constituent members of the S&P 500, that line has been breached for three consecutive days -- all red in color.

In plain speak, the pros have lightened their books.

I saw Palantir (PLTR) down 8% and trading at the 21-day exponential moving average. I love, love, love that half of Wall Street hates these guys. (Remember, before you listen to anyone repping a big bank, their comments are scrubbed down by their legal departments and they have no personal skin in the game. None. Zero. You have more risk on the table than they do.) Ahh, Take 'em. I saw Ford Motor (F) trading in the hole. Gulp.

Do I think this is a bottom? A bottom, maybe. The bottom? No. The fiscal story has not played out. The monetary story hasn't even started. China is not going to be the global player it was over the past two decades. We have no idea where we are in tamping down the pandemic. We have no idea how much slack exists in labor markets. I think that TINA does eventually show her face. I think that takes equities higher down the road.

If you do something else occupationally and invest for yourself peripherally, you might get away with holding on, and focusing on what you do. If this is what you do, we have a lot of wood to cut. TINA and Santa may not time this exactly right, but they are both coming.

Be mentally prepared for a month-long knife fight in a dark room until they do. I hate knife fights. More than anything. Except snakes.

Get an email alert each time I write an article for Real Money. Click the "+Follow" next to my byline to this article.
TAGS: Federal Reserve | Futures | Indexes | Markets | Mortgage Backed Securities | Rates and Bonds | Small Cap | Stocks | Trading | China | U.S. Equity

The stock continues to hold and rally, and option premiums are relatively light.

Geodrill drills for gold and minerals, while Vicinity Motor has EV busses.