We believe better buying opportunities are down the road.

Charts of the major equity indexes and market breadth have weakened.

Also, market data has yet to suggest the period of consolidation of the rally's gains, which we speculated was likely to occur, is complete. Meanwhile, forward 12-month consensus earnings estimates from Bloomberg continue to erode. 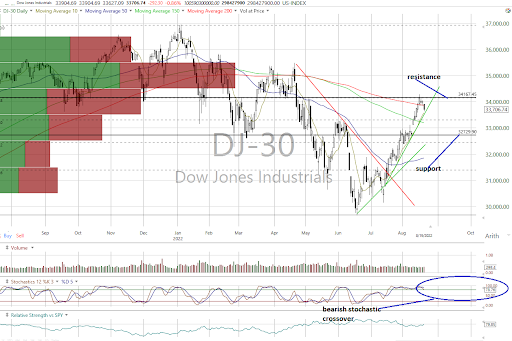 All the major equity indexes closed lower on Friday with negative internals as all closed at or near their intraday lows.

The charts saw some technical weakness appear as all but the DJIA (see above) closed below their accelerated uptrend lines, turning all near-term trends to neutral from bullish with the exception of the DJIA staying bullish.

Importantly, there were no violations of support.

However, market cumulative breath softened as well with the advance/decline lines for the All Exchange, NYSE and Nasdaq turning neutral from bullish.

The cautionary bearish stochastic crossover signals triggered on the Nasdaq Composite, Nasdaq 100 and Dow Jones Transports Friday morning were followed by the rest of the indexes as of Friday's close.

Drilling Down on the Data

The McClellan Overbought/Oversold Oscillators are neutral and not yet offering oversold opportunities (All Exchange: -38.58 NYSE: -44.42 Nasdaq: -34.24).

The percentage of S&P 500 issues trading above their 50-day moving averages (contrarian indicator) remains in bearish territory at 88%.

The detrended Rydex Ratio (contrarian indicator) dipped to -0.21 and is neutral as well.

The Investors Intelligence Bear/Bull Ratio (contrary indicator) also moderated with the number of bears dropping and bulls increasing at 27.8/44.4. Its three-week moving average remains bullish at 83.79.

The forward 12-month consensus earnings estimate from Bloomberg for the S&P 500 continues to slip, down to $232.88 per share. Thus, the valuation spread remains a bit wide, in our opinion, with the S&P's forward P/E multiple at 18.2x and at a premium to the "rule of 20" ballpark fair value at 17.0x.

Our concerns discussed here last Friday regarding the potential for some pause/consolidation of the sizable gains from the June lows appears to have commenced. The charts and data have yet to imply said consolidation is complete, however. Thus, we will wait for the charts and data dashboard to yield more positive evidence before becoming more optimistic as important support levels may be tested.