While the markets advanced Friday, they did so with generally negative internals as market breadth was negative. The end result, in our opinion, was the charts ended up giving mixed signals.

Several indexes violated their near-term resistance levels, and others registered "gravestone doji" candlestick patterns typically associated with tops. While not infallible, they are worthy of consideration. 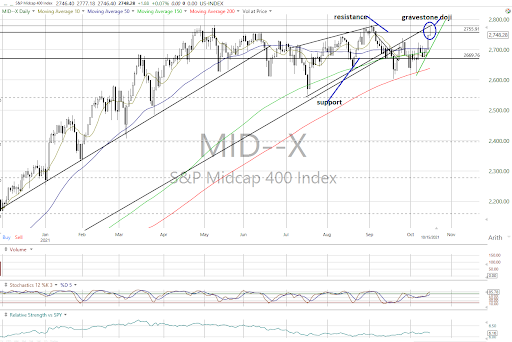 All the major equity indexes closed higher Friday except the Russell 2000, which declined. Internal breadth, however, was negative on both the NYSE and Nasdaq.

However, on the negative side, the MidCap 400 (see above) and Value Line Arithmetic Index developed "gravestone doji" candlestick patterns that are theoretically associated with tops. These patterns develop at the end of a rally when an issue opens and closes at the same level after giving back all its notable intraday gains. It implies sellers are back in charge.

Regarding trends, the Nasdaq Composite, Nasdaq 100 and Value Line index are neutral with the rest positive.

Cumulative market breadth still finds the All Exchange and NYSE A/Ds positive and above their 50 DMAs with the Nasdaq neutral and below its 50 DMA.

All stochastic levels are now overbought but no bearish crossover signals have been generated thus far.

The data find the McClellan 1-Day Overbought/Oversold Oscillators for the NYSE still in oversold territory and suggesting some caution may be warranted for the very near term with the rest neutral (All Exchange: +40.94 NYSE: +59.31 Nasdaq: +27.43).

The detrended Rydex Ratio (contrarian indicator), measuring the action of the leveraged ETF traders, remains neutral at 0.25 as their bullish expectations have waned from their excesses at the market's highs.

The Open Insider Buy/Sell Ratio turned neutral from negative at 28.6% as insiders did some buying.

We are keeping our near-term "neutral" macro-outlook for equities in place as, despite Friday's gains, the negative breadth, doji patterns and stochastic levels suggest some near-term caution is still warranted.