By STEPHEN GUILFOYLE Sep 15, 2022 | 07:39 AM EDT
Stocks quotes in this article: CVX, OXY, APA, UNP, CSX, NSC, CP, CNI, BRK.A, BRK.B, XLE, XLRE, XLB, LMT, GD, NOC, WMT
It was the day after the Bureau of Labor Statistics released their report for August CPI. The day after a very nasty selloff took most of our major equity indexes below all of their key moving averages.
On Wednesday, that same BLS would publish their data for August producer level prices. At the headline, there was no surprise. The month-over-month print hit the tape at -0.01%, as the year-over-year print passed at +8.7%. Both of those numbers landed precisely upon consensus view, and at the midpoint of consensus range.
Core PPI (ex-food & energy), however, threw markets something of a curveball. Month-over-month core PPI hit the tape at +0.2%, in line with July's pace and just a tick below expectations. Core PPI printed at +8.1% y/y, up from July's +7.6% and much-hotter-than-consensus view of +7.0%. In fact, the top end of the range of expectations was for growth of +7.2%.
CPI is a lagging macroeconomic indicator. PPI, as far as consumer prices are concerned, can be a loose leading indicator. How disappointing that the nastiest part of both August CPI and August PPI data came from the core.
On the one hand, maybe that's a positive. I mean the constriction of demand through the application of monetary policy can actually have an impact on the core, where demand is more elastic (at least non-medically). On the other hand, how alarming is it that six months after inflation had apparently peaked, that we now see prices heating up in parts of the economy that had not been as hot as others?
How alarming would it be if energy prices re-energized, while core prices were still hot? Hmmm...

OPEC warns that the recent selloff in crude oil prices is based on "erroneous" signals hitting those markets such as light-ish projected demand. Meanwhile, the Financial Times reported on Wednesday evening, U.S. shale industry executives have been warning Europe in recent days that production of both crude and natural gas is what it is, and cannot be ramped considerably higher in order to rescue Europe this winter as access to Russian energy commodity supplies is expected to remain anywhere from scattered to non-existent. Some see this reality taking crude prices back above the $100 per barrel mark. As for U.S. exports of liquefied natural gas, it is believed that U.S. originated delivery is already close to capacity.
I'm already long both Chevron ( CVX) and Occidental Petroleum ( OXY) , and thinking that I probably should expand my current exposure to energy in general and natural gas specifically.
I looked for a technical setup to my liking last night and think I may have found one in an old friend, a name that I have traded very well in the past: APA Corp.  ( APA) , the old Apache Oil.
Check this chart out: 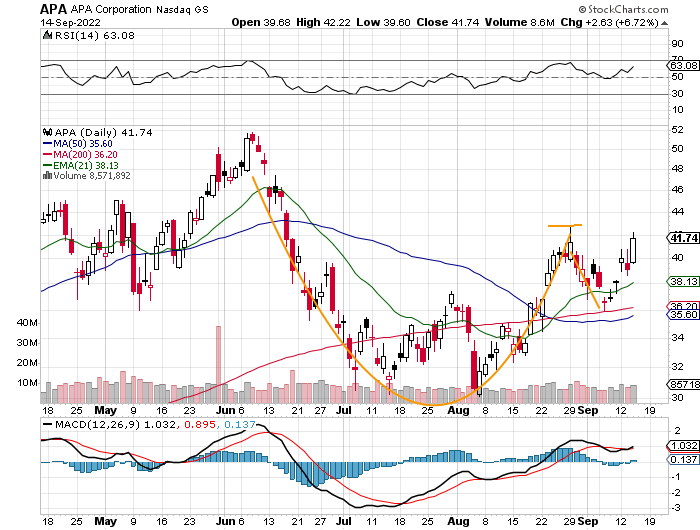 APA is currently making a run at a $42 pivot created by a three-month long cup-with-handle pattern. Relative Strength is better than neutral, while the daily Moving Average Convergence Divergence (MACD) is obviously trying to present a bullish crossover of its 26-day exponential moving average (EMA) by its 12-day EMA. All three MACD components are in positive territory.
My thoughts? If pivot can be taken and held here, that a next leg run-up to the highs of early June could be anywhere from possible to probable. All three moving averages that I consider key (21 day EMA, 50-day simple moving average, 200-day EMA) are trending higher. Whether or not I initiate this name depends on what the stock does at pivot.

What certainly would have made inflation worse almost immediately would have been a rail strike. That had been a real possibility as soon as this Friday (tomorrow). However, there are reports early this morning that a deal has been reached that would keep labor on the job as well as keep the major railroads such as Union Pacific ( UNP) , CSX Corp ( CSX) , Norfolk Southern ( NSC) , Canadian Pacific ( CP) , Canadian National ( CNI) , and BNSF rolling. BNSF is the old Burlington Northern Santa Fe Railway and is a subsidiary of Berkshire Hathaway ( BRK.A) , ( BRK.B) .
A strike would have likely cost the U.S. economy roughly $2B per day, while hampering delivery for about 45% of all U.S. goods.

There was a somewhat tepid attempt to rally equities on Wednesday in response to Tuesday's severe beatdown. The rally was somewhat muted in aggregate, which makes today a tough read for anyone following the old three-day rule. Day one would be the event itself. Day Two is usually the reaction to day one. Day three is sometimes seen as a return to either trend or normalcy. Good luck with that.
On Wednesday, The Nasdaq siblings (Composite & 100) enjoyed a mild rebound of 0.74% and 0.84%, respectively, led higher by the 1.14% run made by the Philadelphia Semiconductor Index. Other than those three indexes, scanning all of the others that I consider to be key, not a lot was really moving. The S&P 500 and Russell 2000 both gained "small." I consider a move of half of one percent or less to be "small." The S&P MidCap 400, S&P SmallCap 600, Dow Jones Transportation Average and KBW Bank Index all gave up "small" ground.
Six of the S&P sector-select SPDR ETFs shaded green for the day, with five in the red. Six of the 11 moved less than one half of one percent, while Energy ( XLE) easily led to the upside (+2.82%), and the REITs ( XLRE) tied with Materials ( XLB) for last place, both -1.22%. Breadth was not all that telling. Winners beat losers by a hair at the NYSE, while losers beat winners by a smidge at the Nasdaq Market Site.
Advancing volume took a 51.5% share of composite NYSE-listed trade and 62.2% of that metric for Nasdaq listings. Aggregate trading volume was up small day over day for NYSE names and down 6.3% day over day for Nasdaq names. Trading volume across the S&P 500 and the Nasdaq Composite managed to reach the 50-day trading volume moving average for both indexes for a second straight day.
Treasuries have not rebounded in general from Tuesday's beating. The U.S. 2-Year Note has been hit particularly hard, as that yield bottomed at 3.51% just ahead of the CPI release Tuesday morning, ending that day at 3.75%, and ending Wednesday at 3.8%. I see U.S. 2-Year paper paying more than 3.82% this morning. 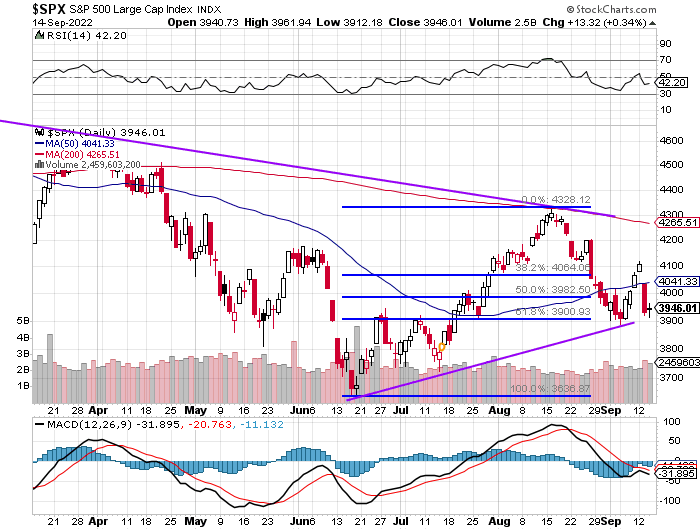 Note that for the S&P 500 as well as for a host of other major indexes, this week's low is still above last week's low. In addition the lower trend line of our closing pennant has still not been violated. That's for the bulls. For the bears? A rising 50-day SMA will be a tough take and hold, while a still-sagging 200-day SMA will keep cash levels elevated.

On Wednesday, the U.S. Senate Foreign Relations Committee passed the Taiwan Policy Act by a 17-5 margin. The bill provides $6.5B to fund weapons and other ancillary support for Taiwan as Communist Chinese forces have in recent months, escalated harassing activities around Taiwan, in both Taiwanese airspace as well as waters. The bill still requires passage by the full Senate as well as the House in addition to a presidential autograph, though there does appear to be bi-partisan support.

In addition to the $6.5B, the TPA would create a $2B loan facility to aid Taipei in the purchase of more weaponry and makes Taiwan eligible for a program that could help the autonomous island beef up its military capabilities rapidly. The bill, if passed, would also require the U.S. to impose sanctions on a minimum of five Chinese banks should Communist China escalate the situation though a naval blockade or the outright seizure of Taiwanese territory.

Yes, I remain long Lockheed Martin (LMT) and General Dynamics (GD) , as well as Northrop Grumman (NOC) . That last one was a Tuesday "buy the dip" re-initiation ahead of the firm's presentation at Morgan Stanley's annual Laguna Conference.

I saw on Wednesday that Walmart (WMT) was readying itself to offer checking accounts to its own employees (1.6M of them) as well as its shoppers through the fintech start-up known as "One," which is led by Walmart itself. Moving into fintech for the masses seems like a no-brainer for Walmart, as the chain caters to the common consumer, a number of whom might be underbanked. Where do they go? Where do they shop? Where do we all shop? Walmart. That's where. I thought to myself, "Self, this could be a home run." Did I buy the shares? No.

No wonder Walmart wants to borrow a chunk of dough. As for the equity, no thank you.