By STEPHEN GUILFOYLE Nov 16, 2021 | 08:03 AM EST
Stocks quotes in this article: HD, WMT, STNE, LMT, GE, GD, HON, XLU, XLF, SPLK, ARKW, LCID, TSLA
OK, virtual summit.
U.S. and Chinese Presidents Biden and Xi held their virtual meeting on Monday night... or on Tuesday morning, depending on where you live. There were no high hopes for any kind of resolution across a wide range of topics that included trade, climate change, Covid, human rights, North Korea, Iran, Afghanistan, and of course... Taiwan. Indeed, nothing has been, nor will be easily resolved.
It appears simple, it also might seem childish that this author might buy what is being sold, but this author is and always has been a "glass half full" type, and if talking means nobody is shooting, then talking, even sans definition, is a start, and a start is not the worst place to be.
Dialogue is how expectations are managed. Dialogue is how violence is averted. Starts are positive. That is not naivete. Starts, however, are only just that. The lines of communication must be continual, and must be developed. We'll see.
President Biden said, "Our responsibility as leaders of China and the United States is to ensure that the competition between our countries does not veer into conflict." President Xi referred to President Biden as "old friend" in reference to Biden's days as Vice President, and stated, "China and the United States should respect each other, coexist in peace and pursue win/win cooperation. I stand ready to work with you, Mr. President, to build consensus, take active steps and move China-U.S. relations forward in a positive direction."

Relations between Beijing and Washington had become strained under President Biden's predecessor, and worsened as China appeared to do very little to try to contain what became a global pandemic, or at least be open with information once that virus had badly impacted other nations.
This relationship only appeared to worsen as President Biden took the oath of office and the autonomous island of Taiwan (population: 24M), considered part of China, but governed independently and defended by its own U.S.-backed military, became a geopolitical flashpoint.
It is no secret that Chinese air forces have launched hundreds of sorties into Taiwanese air space this autumn, as Beijing views this air space as Chinese whether or not it is near Taiwan, and Taiwan views Beijing's aircraft as foreign threats. On this front, President Biden did allow that the U.S. remains committed to the 'One China' policy, but also that the U.S. "strongly opposes unilateral efforts to change the status quo, or undermine peace and stability across the Taiwan Strait." I read that as... go ahead and refer to Taiwan as part of one China in name, but don't try to make that happen.
In response, President Xi blamed recent tensions with Taiwan on local authorities reliant upon the U.S. to seek independence. Xi said, "We have the patience and are willing to strive for the prospect of peaceful unification, but if the separist forces of Taiwan independence continue to provoke and cross the red line, we will have no choice but to take drastic measures."

Because You Were About to Ask...

Like I said, there were no resolutions. For those seeking answers to the obvious question: Within the past two years, Taiwan has placed orders for, and awaits delivery on 66 F-16V Falcon fighter jets and is currently updating their fleet of 42 F-16 A/Bs to the updated F-16V. The F-16V is manufactured by Lockheed Martin ( LMT) and built with General Electric's ( GE) F-110 engines.
In addition, Taiwan has also placed an order for 108 M-1A2 Abrams Main Battle Tanks to augment their fleet of 480 Vietnam War era M-60A3 Patton style tanks. The M-1 was originally designed by the Chrysler Corporation, is currently built by General Dynamics ( GD) Land Systems, and is put together with Honeywell's ( HON) AGT 1500 multi-fuel turbine engine. The tanks will likely be delivered by 2023.

It was as if equity markets had taken the day off. Not bond markets, however. The U.S.10-Year Note paid as much as 1.63% on Monday afternoon, while the U.S. 30-Year Bond yielded as much as 2.01% at one point.
This forced a rapid steepening of the Treasury yield curve as evidenced nere by the 90-day T-Bill /10-Year yield spread:

These yields have relaxed overnight, perhaps partially in response to the above-mentioned summit. As the wee hours pass, I see 30-Year and 10-Year paper yielding 1.97% and slightly less than 1.60%, respectively.
Impacting stocks on Monday, were worries over a Fed that might need to hasten the removal of accommodation as the Empire State Manufacturing Index for November (our first look at November manufacturing sector performance, either national or regional) came in especially hot, with renewed strength in New Orders, Shipments, Prices Paid, Prices Received, Number of Employees and Average Workweek.
This came on top of a rather gloomy outlook for both U.S. equity and debt markets for the coming year published by Morgan Stanley. Morgan Stanley's U.S. Strategist, the closely followed Mike Wilson, sees the S&P 500 at 4400 by year's end 2022. The S&P 500 closed on Monday at 4682.
Though slightly to the downside, so officially in the red for the session, the S&P 500, Dow Jones Industrial Average, Nasdaq Composite and Nasdaq 100 all essentially closed flat. The Dow Transports, S&P MidCap 400 and S&P SmallCap 600 all closed slightly in the green, but also close enough to flat to consider any movement inconsequential. Among highly followed indexes, only the Russell 2000 (-0.45%) strayed far enough from where it closed on Friday to register anything worthy of mention.
Among, sector select S&P SPDR ETFs, Utilities ( XLU) led the way, as Financials ( XLF) truly did close flat, which is, in my opinion, rather odd as one might expect Financials to do better as yield spreads expand, and one might expect Utilities to perform poorly for the same reason being that dividend payers tend to find more favor with investors when yields fall.
Losers beat winners at both of New York's primary equity exchanges, while aggregate trading volume ebbed for names domiciled at both locations. Advaning volume bested declining volume for NYSE names, while the opposite was true for their Nasdaq counterparts.

For those hoping for a second consecutive day of peace, you can probably forget it. While the president's signature did turn the bipartisan infrastructure bill into law, that event had been priced in for days already if not weeks.
That said, the macroeconomic calendar gets hot this morning as will the docket for Fed speakers. Four such plate spinners will climb out of their respective holes this afternoon and then there are 11 more such events over Wednesday and Thursday.
It's as if they want to reinforce a message or something. Fact is, nobody even knows who will chair the committee. That decision should have been made months ago.

I mean Splunk ( SPLK) ! Splunk gave up 18.1% on Monday, closing at $137.38, down more than $30. The company announced that president and CEO Doug Merritt is leaving after six years. No reason was given for the resignation that comes just seven months after CTO Tim Tully resigned. Chairman Graham Smith will serve as interim CEO as the search begins for a successor.
Splunk, set to release quarterly results in about two weeks, did release some preliminary numbers. The company says third-quarter revenue beat expectations while total ARR (Annual Recurring Revenue) of $2.825B will be in line with what Wall Street will be looking for. No mention on earnings, which are expected to print close to a loss of $0.55 per share. 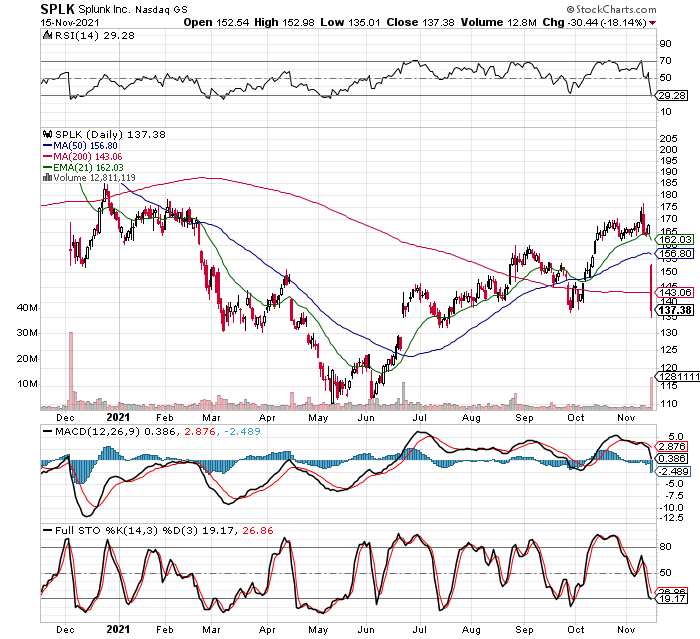 I see a broken stock that sawed right through its own 21-day exponential moving average (EMA), 50-day simple moving average (SMA), and 200-day SMA all in one session. About the only positive takeaway would be the newly formed unfilled gap to the immediate north. Is Splunk a broken company? How do we know? We don't even know who is going to run the place, and neither do they.
For that reason, I resisted my impulse and did not take the other side of Monday's trade. Yet. Cathie Wood, was far bolder, however.
Wood bought slightly less than 120K shares of SPLK on Monday for her ARK Next Generation ETF ( ARKW) . Does Merritt's exit have anything to do with this past June's $1B investment made by Silver Lake Partners that placed Silver Lake Chairman Kenneth Hao on Splunk's Board of Directors? I don't know. I bet Cathie Wood's investment might be based on it though.

For the record, Lucid Group ( LCID) posted a third-quarter net loss per share of $0.43 on little more than no revenue. What Lucid did report was customer reservations of 13K vehicles for the quarter, reflecting an order book worth approximately $1.3B. Reservations, by the way, are now up to 17K. The company also confirmed the 20K vehicle production target for 2022.
While Lucid has burned through $1.5B in cash through the first nine months of the year, the closing of the de-SPAC reverse merger + PIPE brought in roughly $4.4B in July, bringing Lucid's cash position up to $4.8B at quarter's end. The balance sheet, just an FYI, is in spectacular condition (Yes, I am long the name and talking my own book), with total assets of more than $6.1B and total liabilities less equity of just $1.29B. The lion's share of the liability side of the balance sheet is an $836.8M entry for Common Stock Warrant Liability.
These guys do not owe a lot of dough. Should Lucid meet the production target of 20K vehicles in 2022, that would generate more than $2.2B in revenue, according to the company. The shares are trading higher overnight, but that could change like the wind.
My opinion? There is no doubt that developed nations are trying to transition toward electric vehicles and away from the old internal combustion engines that run on gasoline. There is no doubt (again, my opinion) that Lucid is the technology leader in the space in terms of battery weight, size and output, not to mention range.
Is this a high conviction investment for me? Close to it. I would prefer to see a vehicle entry that targets the middle class ahead of uncertain economic times. For now, however, Lucid will have to stick to the high end market and leave Tesla ( TSLA) with the lone dominant layer in the space for now.

(WMT and HON are holdings in the Action Alerts PLUS member club. Want to be alerted before AAP buys or sells these stocks? Learn more now.)

Get an email alert each time I write an article for Real Money. Click the "+Follow" next to my byline to this article.
TAGS: Earnings | Federal Reserve | Futures | Indexes | Markets | Stocks | Trading | Treasury Bonds | U.S. Equity