By STEPHEN GUILFOYLE Aug 23, 2022 | 07:19 AM EDT
Stocks quotes in this article: DKS, SJM, M, MDT, AAP, INTU, AMD, NVDA, MRVL, XLE, JNJ, ZS, PANW
Run to the hills? Or are we simply adjusting?
U.S. equity markets suffered some of their biggest one day declines of the summer on Monday. The two-day declines, once Friday is included, are daunting. What gives? Sellers, that's what. Sellers went into Friday with huge six-to eight-week profits, and came out of Monday with cash in hand.
What do the Dow Industrials, Dow Transports, Nasdaq Composite, Nasdaq 100, Russell 2000, S&P 500, S&P SmallCap 600, and S&P MidCap 400 all have in common? They all gave up at least 1.58% and as much as 2.65% on Monday. They all also managed to surrender their respective 21-day EMAs (exponential moving averages) during the regular session, turning the swing trading crowd against them.
The Philadelphia Semiconductor Index? Even worse. The "SOX" lost the 21-day line on Friday and spit the bit for 3.72% on Monday: 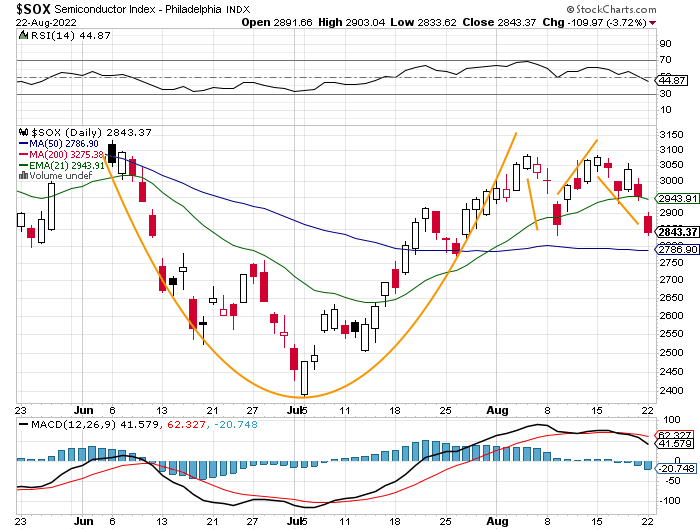 Readers will see in the above chart that what for the semiconductors, in a broad sense, appeared to be a developing cup-with-handle pattern as recently as less than two weeks ago, has rapidly morphed into a mini- "double top" pattern. Poof... from an optimistic technical pattern to a negative one, just ahead of some higher profile earnings across the space.
We get it. I think. Tech stocks, as most are labeled "growth" type equities, are particularly vulnerable to hawkish central bank posture and upwardly mobile short-term interest rates as such an environment would have a corrosive impact upon the estimated value of future earnings. The semis have experienced oversupply due to clients that have double and triple booked.
I already told you that I halved my stake in Advanced Micro Devices ( AMD) and completely exited Nvidia ( NVDA) . I completed that process last week. Still love both firms. It was a case of simply reweighting AMD, and getting out of the way of Nvidia earnings this Wednesday. Not that I know anything, but the firm already warned on revenue. It does not take much imagination to picture a damaged environment for the bottom line and for guidance, especially a probable reduction in demand for GPUs capable of mining for cryptos (Ethereum?) looming.
That leaves Marvell Technology ( MRVL) unmentioned, among this summer's three semiconductor Sarge faves. Last week, I actually beefed up that position to a degree. Why? I was a little bit underweight, and, in my opinion, this is more of a pure play on the data center as well as on 5G. Not that those two business lines are the golden ticket. Far from it, but the demand for both data center and 5G expansion, while subject to an oncoming recession (like the rest of the economy), is not subject to the kind of volatility in demand that perhaps cryptocurrencies, automotive and even gaming might be.

We already covered the indexes. A broad beatdown across cap-size classes. Technology was the epicenter.
For the session, all 11 S&P sector-select SPDR ETFs closed lower for the day. The best-performing sector was Energy ( XLE) , which still closed -0.19% for the session despite a sharply bullish reversal for WTI Crude and surging U.S. natural gas prices. The other 10 sectors all gave up at least 1%, with five of the 11 giving up more than 2%. Defensive stocks outperformed cyclicals.
Breadth was rather awful. Losers beat winners by 5 to 1 at the NYSE and by about 7 to 2 at the Nasdaq Market Site. Aggregate trading volume, while still not truly heavy, increased for NYSE-listed names from Friday, even though Friday was a double-witch expiration event, while aggregate trading volume ebbed day over day for Nasdaq-listed names.
Advancing volume took just a 17.3% share of composite trading for stocks domiciled in lower Manhattan, and a 21.9% share for names domiciled up in Midtown. The CBOE Total Put/Call Ratio at 1.08, matched its highest level since the market lows of June:

Simultaneously, the VIX (remember that little fella?) has just spent two days breaking out of a two-month downtrend: 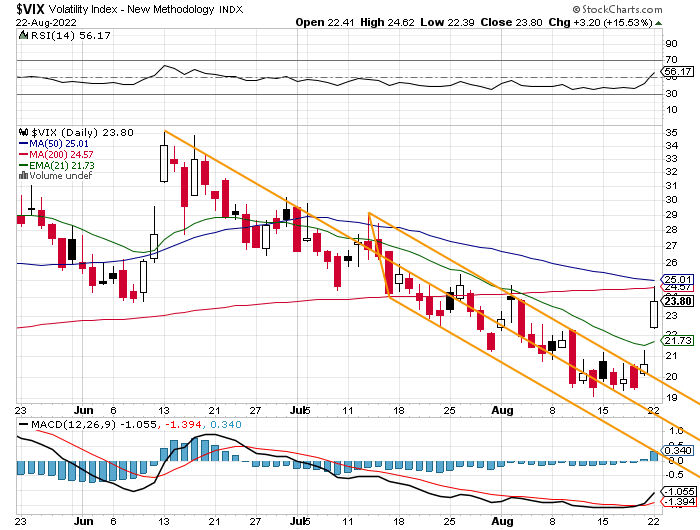 Readers will note that the VIX took back its 21-day EMA, and actually met resistance at its 200-day simple moving average (a potential market positive). Unfortunately for equity markets, the VIX experienced a bullish (for the VIX) crossover of the 26-day EMA by the 12-day EMA on the daily Moving Average Convergence Divergence (MACD), while Relative Strength screamed all the way from a summer spent scraping along technically oversold territory to a more than neutral reading.

You may have noticed that Bloomberg News is reporting record-sized net short positions across the hedge fund industry on eurodollar futures, basically betting that whatever Jerome Powell says on Friday at Jackson Hole and whatever the FOMC does on September 21 will support the recently more hawkish rhetoric spewed to the masses by a number of Fed officials.
The euro fell on Monday versus the U.S. dollar below parity, trading as low as 0.9928. I see it trading slightly below that level overnight. The U.S. dollar index, popularly known as "the Dixie" for its symbol (DXY), is more heavily weighted against the euro than it is against any other reserve currency, and is trading above $109 this morning. This is the highest level for the DXY in 20 years, since peaking with a 118 handle in 2002.
The bright side of an overtly strong home currency would be that Americans traveling abroad will benefit. That's if they can find a nice place abroad with enough food and fuel (those prices in those places are already inflated). Good luck. The negative impact will be felt by U.S. corporations doing business elsewhere. This will damage margin and subsequently profitability.
At least a strong U.S. dollar should have a deflationary, or at least a disinflationary impact upon commodity prices. Right?

U.S. natural gas prices are soaring as front-month futures approach the $10 level. January 2023 natural gas futures are already there. It's going to be a cold winter, kids. Load up on wool socks and extra sweaters now.
In addition, Saudi Arabian Energy Minister Prince Abdulaziz bin Salman in a written response to questions posed by Bloomberg News cited "extreme" volatility and lack of liquidity in paper oil markets as a potential reason for OPEC+ to feel forced to cut physical production of oil. This turned markets for both Brent and WTI Crude around on a dime on Monday.
Front-month WTI crude futures traded in the low $87's on Monday. I see them trading above $92 this morning.

Did I Buy Anything on Monday?

Yes, I did.
I initiated a long position in Johnson & Johnson ( JNJ) at entry-level size with an intention to add down to $155 given the opportunity as laid out in my piece for Real Money Monday. I see this name as a somewhat "defensive" place to hide for now, but with some growthy type potential a year down the road.
I also bought Zscaler ( ZS) for an overnight rental based on the awesome quarter reported last night by Palo Alto Networks ( PANW) .

Picking a stock is easy. Managing it as market conditions change and price action shifts is the hard part.

Cash Is King Once Again in This Market Environment

After more than a decade of historically low to near zero interest rates, cash has value again.

Sell Signals Have Yet to Appear Amid Market Rally