A weak market session Monday saw most of major equity indexes close near their lows of the day with two charts violating support. However, three of the indexes saw successful tests of their 50-day moving averages that we speculated yesterday could possibly mark the short-term lows.

Yet while the charts still leave a lot to be desired, the data has turned more encouraging with the McClellan OB/OS Oscillators near levels associated with market bounces while the valuation gap for the S&P 500 has narrowed for the second consecutive day.

As such, we believe a bounce is now likely. Whether resistance levels can be violated has yet to be seen, though. 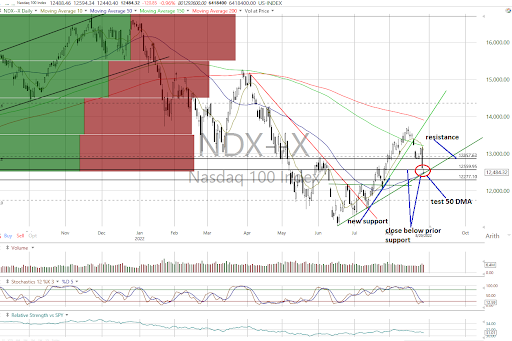 Negative chart events were registered on the Nasdaq 100 (see above) and MidCap 400 as both closed below support. As such, all the near-term trends are bearish except for the Nasdaq Composite staying neutral.

We speculated in our Monday column that tests of some 50-day moving averages were likely and they were, in fact, seen on the DJIA, Nasdaq Composite and Nasdaq 100. While not an assurance, successful tests of 50 DMAs can frequently mark near-term lows.

Market cumulative breadth deteriorated to negative from neutral but can be viewed as a coincident indicator.

We will keep a close eye on the stochastic levels that are oversold on all the charts. Bullish crossovers would set a more positive tone, in our opinion.

The McClellan Overbought/Oversold Oscillators are deeper into oversold territory and near levels frequently associated with bounces (All Exchange: -84.85 NYSE: -89.67 Nasdaq: -86.91).

The percentage of S&P 500 issues trading above their 50-day moving averages (contrarian indicator) dropped to 58%% and remains neutral versus its prior cautionary implication at the recent highs.

The detrended Rydex Ratio (contrarian indicator) at -1.01 is mildly bullish.

The Investors Intelligence Bear/Bull Ratio (contrary indicator) is 29.6/45.1 (neutral) with an increase in bears.

The forward 12-month consensus earnings estimate from Bloomberg for the S&P 500 rose for the second day in a row, after several declines, to $232.64 per share. As such, the valuation spread narrowed further but is still at a slight premium to ballpark fair value via the "rule of 20" with the S&P's forward P/E multiple down to 17.3x versus 16.9x.

The 10-Year Treasury yield closed higher at 3.11% and still within what we view as its current trading range with support at 2.92% and resistance at 3.16%.

The past two sessions have weakened the charts and market breadth. However, the data is suggesting some relief is likely at hand that may result in tests of resistance.