The weakness in the market Wednesday resulted in all but one of the index charts violating support while cumulative market breadth turned negative.

Meanwhile, the data remain largely neutral, all of which suggest the recent consolidation of the March rally may not yet be completed.

The one data point that remains on the positive side of the scale is the extreme degree of bearish investor sentiment, which is a contrarian indicator. However, that side of the scale needs more weight of the evidence added before assuming that the correction has likely been completed. 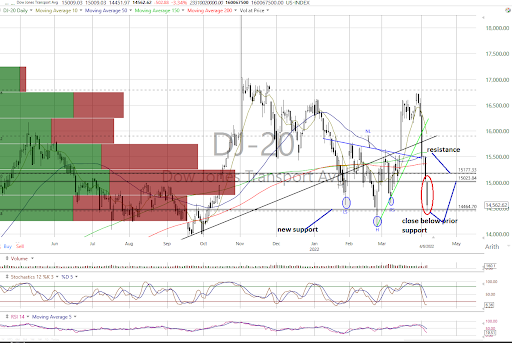 All the major equity indexes closed lower Wednesday with negative internals on the NYSE and Nasdaq on higher trading volumes.

The only index that did not violate support was the Russell 2000. However, the bulk of the indexes, in our opinion, remain near-term neutral trends given the vertical nature of the March rally.

As of the close, only the Dow Jones Transports (see above) turned near-term negative.

Unfortunately, market breadth soured further as well with the cumulative advance/decline lines for the All Exchange, NYSE and Nasdaq turning negative with all below their 50-day moving averages.

The McClellan 1-Day Overbought/Oversold Oscillators remain neutral despite Wednesday's market declines (All Exchange: -18.66 NYSE: -22.2 Nasdaq: -14.52). They are not oversold.

The detrended Rydex Ratio (contrarian indicator) dipped to +0.37 and remains neutral versus its prior bullish implications near the March lows.

The consolidation of the March rally continues with no signs generated at this stage to suggest it's complete. We will keep our eyes open for any positive implications. However, Wednesday's action was unable to supply them.

Get an email alert each time I write an article for Real Money. Click the "+Follow" next to my byline to this article.
TAGS: Indexes | Markets | Small Cap | Stocks | Technical Analysis | Treasury Bonds | U.S. Equity