There are many market comparisons today to 1994, which I am told was the last (maybe the only?!) time the Fed engineered a soft landing.

I remember 1994 because it was a very good trading year. Stocks did not go straight down or up but rather after a big plunge (post an early February rate hike) we had a lot of good trading swings.

I do recall in May of that year we started to hear that the "shrink wrap" business was slowing. Tech stocks had not taken much of a hit in the spring decline so they were still trading near their highs.

We don't really have a shrink wrap business today but back then that's how we bought our software. You wanted Lotus 123? You went to Best Buy (BBY) and bought a box wrapped in plastic with the disk in it. In early June Lotus pre-announced a crummy quarter (and you know it's bad when they are not even willing to wait until the end of the quarter to make the announcement) and the tech stocks went down -- a lot.

But what I did not recall was what the statistics and the chart of the S&P 500 looked like. So I thought we might take a look today.

The chart of the S&P 500 back then is remarkably similar in terms of what the S&P had done for the last 18-24 months: a giant sideways.

The blue arrow was the low for the S&P before we launched into the spectacular move of the late 1990s. Let me note one difference is that 1994's sideways lasted almost two years and now we're only at the one-year mark.

The late 1994 low had the Oscillator at a good low.

The late 1994 low had the 30-day moving average of the advance/decline line at a good low (the Intermediate-Term Oscillator).

The current charts of both of those indicators show them more in the middle of nowhere. Notice the 30-day moving average of the advance/decline line then was at the bottom of the page in 1994, back to the spring lows. That is not the case today. We could get there but it will take more time and more downside in breadth to do it.

The Oscillator is closer to an oversold condition but here too look at the plunge in April 1994 and how the secondary low was 7-8 months later. Now we are a about three months beyond the huge oversold reading, so it's more like July 1994.

The number of stocks making new lows on the NYSE in the spring of 1994 exploded to 650. By the time November rolled around and the S&P came back down to that area, there were only 350 new lows. Thus we were extremely oversold with positive divergences in November 1994.

Currently our peak reading for new lows is 800 back in February. As of now we're clocking in about half that. I think that is good news. You see the process is stocks plunge and then spend months rallying and coming back to test and rally and test, building bases. With only three months behind us since the plunge, there are not many bases built.

I didn't pay much attention to the AAII survey back then so I was quite surprised to see that bears, on a four-week moving average, peaked in the fall of 1992 (that was a European currency crisis in case you want to know what the news was). By the time the low in November 1994 showed up the four-week moving average of bears was 33%. 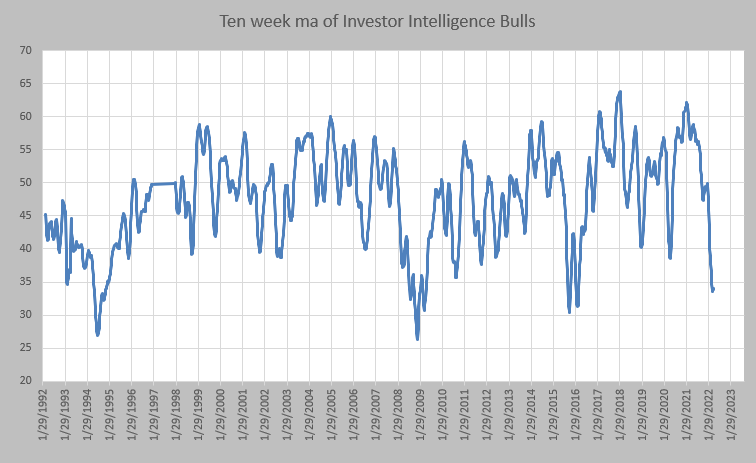 I am not a Fed watcher nor am I an economist but I do know that it takes time to build bases, so it's hard for me to imagine we are currently in the same place we were in November 1994. If anything, perhaps it's more like July when we had an oversold rally.

Get an email alert each time I write an article for Real Money. Click the "+Follow" next to my byline to this article.
TAGS: Federal Reserve | Indexes | Markets | Stocks | Technical Analysis | U.S. Equity