By STEPHEN GUILFOYLE Mar 10, 2022 | 07:16 AM EST
Stocks quotes in this article: UP, DOCU, ORCL, RIVN, ULTA, CRWD, AMZN, XLK, XLF, XLE, TSLA, AAPL, LMT
Thursday morning. Crucial. Why?
Wednesday's equity market rally is part of the story. Some of the most ferocious rallies seem to occur during bear markets. Was this just one more bear market rally?
Honestly, we cannot know until there is another rally (on elevated trading volume) within a few days or so of this rally, that in essence would confirm a change in trend.
What am I trying to tell you? It's easier to show you. 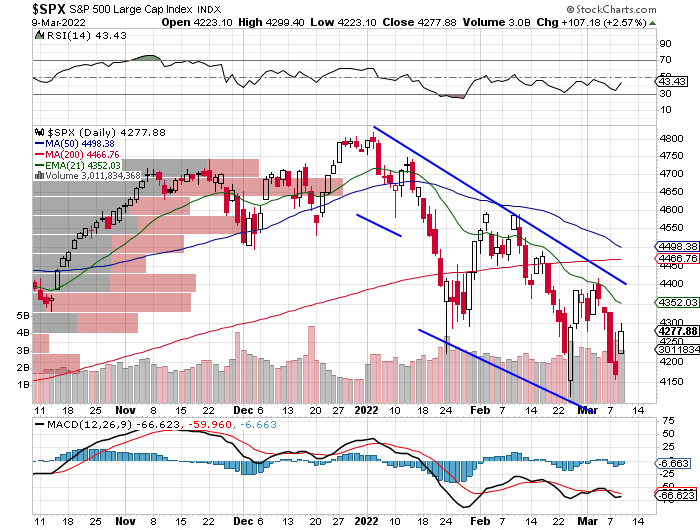 Readers will note the downward trend for the S&P 500 in place since Jan. 4. Since that session, our broadest large-cap equity market index had made three successive lower highs, coupled with three successive lower lows. Should Wednesday's session low of 4223 hold, then Tuesday's session low of 4157 would become a higher low, potentially disrupting the pattern expressed at the lower bound of the existing channel.
That's the easy part.
The index now needs to at least kiss any level on this chart above the March 3 session high of 4416 in order to disrupt the upper trend line of the channel. It also would help significantly if the equity market could rally on increased volume as confirmation someday soon. Doesn't have to be today, or even tomorrow, but it would have to be seen as part of this attempt to break the existing trend. So, by early next week at the latest.
With the war in Europe, February CPI due from the BLS this morning, and an FOMC policy statement due on Wednesday, that might be a tall order, and one that could keep trading volumes light early next week, as they were yesterday (Wednesday). That's right, trading volume literally disappeared yesterday, which has to be seen as a warning.
Yes, I saw the CrowdStrike ( CRWD) earnings release. Yes, I saw the Amazon ( AMZN) news. More fuel to the fire that in more ordinary times, or at least until the market worm had turned, would have had equity index futures flying overnight. Futures have been trading flat to down small to down a little more than small for most of the evening/morning.

Most markets moved aggressively counter to trend on Wednesday, in response to Ukrainian President Zelensky's statement that, in order to achieve peace, he was open to a compromise where Ukraine might not seek membership in the NATO alliance or in the European Union, but would not cede territory recognized globally as part of Ukraine's border integrity. This step forward, which came after Russian President Vladimir Putin had seemed to come off earlier demands for complete Ukrainian capitulation, had folks around the world (including investors) hoping that hostilities might cease, and that overt shortages of commodities might ease.
This hope for an easing of the planet's commodity woes was only enhanced as the United Arab Emirates ambassador to Washington made a statement, reported by the Financial Times, suggesting that the UAE favors increasing oil production and would encourage OPEC to act accordingly.
Before long, these hopes were more or less dashed, as the Russian military, for some reason, bombed a children's hospital in the Ukrainian city of Mariupol, and the UAE ambassador appeared to walk back his prior statement on Twitter.

The events mentioned above had WTI Crude down as much as 12% at one point on Wednesday, bottoming below $108 per barrel. I now see WTI trading above $113. Unleaded gasoline futures bottomed down more than 10% on Wednesday. I would not expect to see that fact expressed to U.S. consumers at the pump. Gold futures bottomed on Wednesday close to $1,977 per ounce, after trading on Tuesday as high as $2,073. I see the yellow metal trading at $1,991 as the wee hours melt.
Speaking of melting, that appears to be what Bitcoin and other cryptocurrencies seem to be doing early on Thursday, erasing a one-day surge based on an executive order that really did not give cause for either bullishness nor bearishness across the space. U.S. Treasury securities weakened on Wednesday allowing the yield curve to move higher on the whole as the Treasury auctioned off $34B worth of 10-year paper. Bid to cover dropped from last month's 2.7 to a more normal 2.5, while indirect bidders took down 68.2% of the issuance, as opposed to last month's incredible 77.3% allocation. While there was a clear reduction in foreign interest in purchasing U.S. national debt, I would call this more a return to normal, than refer to these results as poor.
Turning to equities.
The Nasdaq Composite tacked on a 3.59% gain, which would be considered incredible if not coming at the tail end of a 20%+ multi-month decline, if it is at the end, which we have not yet confirmed. As I have mentioned, bear market rallies can be quite robust.
The S&P 500 added 2.57%, while the S&P MidCap 400 gained 2.81%, and the Russell 2000 gained 2.71%. Nine of the 11 S&P sector SPDR ETFs shaded green for the session with five sectors up 2.99% or greater. The beleaguered Technology ( ( XLK) ) sector led the way, closely followed by the besieged Financial ( ( XLF) ) sector. Energy ( ( XLE) ) took the last place trophy, down 3.11% for a change. In the middle, cyclicals were favored over defensives.
As you most likely suspected, breadth was quite strong -- until you get to the bottom. Winners beat losers by about 3 to 1 at the NYSE, and by 7 to 2 at the Nasdaq. Advancing volume took a 74.6% volume share for NYSE-listed names and a 79.6% share for Nasdaq-listed names. Unfortunately, aggregate trading volume basically evaporated, not relative to trend, but certainly in comparison to recent "down" days. Wednesday aggregate trading volume for NYSE-listed names decreased by some 21.8% from Tuesday. The day-to-day decrease for Nasdaq-listed names shows a 19.3% reduction.
Though reduced from recent days, aggregate trading volume for constituent names of both the S&P 500 and Nasdaq Composite did manage in each case to top their own 50-day trading volume simple moving averages. Meaning? While professional money ran for the hills last Thursday through this Tuesday, it's not like there was no participation on Wednesday, but more like a tempered kind of participation. The pros are being cautious.

While the VIX reacted to Wednesday's rally by giving up a couple of points but staying above its 21-day exponential moving average (EMA) (which has been support)...

... interest surged for protection at the index level.

It would appear that at least some folks without a lot of interest in stock-specific performance have bet against U.S. equity markets holding on to Wednesday's gains.

Readers who follow me know that I opined on this name for Real Money earlier this week. Those readers also know that while I see Amazon's business and balance sheet as fundamentally healthy, I had sold my shares last week, after having given up on CEO Andy Jassy ever getting a stock split across the tape.
Yes, hate mail provoked this segment.
While having exited the name last week, I will not enjoy this overnight, upside move from the long side. That said, this move has only taken the stock back to last week's levels, so while nothing gained, nothing lost either. Readers may also notice a short position in the disclosure down below. That position is small and is the remnant of after-hours day trading. It is not representative of how I feel about the name, nor did that position even exist as of Wednesday night's news release. It probably won't exist much longer either.
For those who really do tune out in between the closing and opening bells, Amazon's board has approved a 20-for-1 stock split, while authorizing up to a $10B share repurchase program. The repurchase program replaces an existing plan that had left an unused $2.88B or so in authorization space.
Shareholder approval is required.
I cannot see any reason for existing shareholders to vote against given what stock splits did for both Tesla ( TSLA) and Apple ( AAPL) in 2020. This vote will not take place until May 25, about a month after Amazon reports its first-quarter performance.

No Dice on MiG-29 Transfers

In what has become a rather embarrassing episode in the effort to better support the Ukrainian war effort, it now appears that Poland's 29 MiG-29 fighter jets, which Ukrainian fighter pilots know how to fly, will be remaining in Poland. Secretary of State Anthony Blinken had stated on Sunday that there was a "green light" for countries to deliver mission-capable MiG fighter jets to Ukraine after Ukrainian President Zelensky had made an impassioned plea for the military hardware to the U.S. Congress over the weekend.
Poland would transfer these jets to Ukraine in exchange for (even if payment is required) a like number of Lockheed Martin's ( LMT) F-16 Fighting Falcons. There is a huge catch, though. Everyone is afraid to provoke Putin. Poland, not wanting to act alone, wants the U.S. to act as a middleman and would fly the jets to a U.S. air base in Germany. to then be transferred to Ukraine. This would make the operation a NATO mission. The U.S., it appears, would prefer that Poland provide the planes directly to Ukraine's air force, leaving the broader NATO out of it. NATO would prefer to provide only what it calls "defensive" military aid. These aircraft could be seen as offensive weapons. Don't expect Poland to act unilaterally.