By STEPHEN GUILFOYLE Aug 30, 2022 | 07:43 AM EDT
Stocks quotes in this article: BBY, CHWY, CRWD, HPQ, XLE, XLU, XLP, CVX, OXY, SWN, RIG, MMM, BLTE
Confirmation of the fact came as no surprise. It was plain to see for all, most especially after Fed Chair Jerome Powell's speech from Jackson Hole on Friday, that the central bank had become uncomfortable.
Uncomfortable with the summer rally. Uncomfortable with equity market performance, in particular that had built a tradeable bottom in mid-June and put together said rally that really saved the year for many participants. Uncomfortable with the "wealth effect" itself, which was the creation of the Federal Reserve.
On Monday, Minneapolis Fed President Neel Kashkari, who does not vote on policy this year, but is popular with the financial media, and is thought of as one of the most dovish-leaning Fed officials when it comes to monetary policy was interviewed on Bloomberg's "Odd Lots" podcast ( where our own Helene Meisler appeared just last week). What Kashkari said, if not truly revealing something many already believed, did in fact confirm for those that needed it, how the Fed feels about equity market pricing and its relationship to inflation/overall demand. Bloomberg News broke the story ahead of the release of the podcast itself, which is where I read the story.
Kashkari, who sat down with hosts Joe Weisenthal and Tracy Alloway, said, "I was happy to see how Chair Powell's Jackson Hole speech was received. People now understand the seriousness of our commitment to getting inflation back down to 2%." Kashkari added, "I certainly was not excited to see the stock market rallying after our last Federal Open Market Committee (FOMC) meeting, because I know how committed we all are to getting inflation down. And I somehow think the markets were misunderstanding that."
Face meet frying pan. You may be loving these discounted equity prices. I have reduced exposure and have been slow to return my holdings back to size, even though there will have been a handsome extraction of capital. Why? Because I have been around the block once or twice... and I am really not afraid of a whole lot in this world. I am, however, real wimpy when it comes to fighting the Fed.

Understand what it is that we, the investing/trading public are up against.
I have told you and you may have read how I feel about this more hawkish trajectory for monetary policy. I may or may not have better ideas than the Fed Chair and his crew. Bluntly put, I think I do. The fact is, however, that I do not set policy. They do. The only thing that matters as far as the mouths I feed are concerned, is how well I manage to traverse the environment presented. I can have my own set of opinions, but adapting to and overcoming the obstacles that lie between here and victory are all that gets the job done. Not sounding smart.
Powell was concise. He said almost nothing before he punched you in the mouth. Unless they (he) back (s) off now, you have been warned... monetary policy will tighten and stay tight until year-over-year consumer-level inflation returns to something close to 2% and stays there for a convincing enough period of time. The Fed is willing to inflict pain on both households and businesses in order to achieve their primary objective. That's not just a punch in the mouth. That's the bully sitting on your chest after you're already dazed...and whaling away.
We all know that the Fed kept up its "quantitative easing" program for far too long and kept purchasing mortgage-backed securities (I warned on that for a year) despite those markets needing no artificial support whatsoever. They created too much slosh. That's now on you for buying stocks. Embrace it. You have no choice. The Fed was too easy for far too long, after having done a magnificent job throughout the pandemic era. Now, the Fed will be too tight, probably for far too long. That is your environment.
The economy will either move into or more deeply into recession (depending on your political preference), and that is by design. Even in an election year? It appears so. This does not mean no participation. Scared money doesn't make more money. What it means is that for those of us who consider ourselves to be both traders and investors, that we probably have to be more traders than investors, which is what we did pretty much all year, with the exception of the mid-June through late August period.
We can do this. Will it be tough? Well, would you want it to be easy? If we can traverse this, we will cement our membership among the few, the proud, the elite. So, suck down one more coffee and prepare thyself for a great challenge. Tell me who among us has not honestly thirsted all of his or her life for a chance to face off against incredible odds just one more time... and defeat a superior force on their turf? Rock and Roll.

WTI Crude charged ahead again on Monday, gaining more than 4%, and apexing up in the $97.60s very early this (Tuesday) morning before plummeting a couple of bucks off of that top. Still early this morning. Brent crude and gasoline futures have moved in lock step with WTI. Other commodities, even other energy space commodities such as natural gas, have not.
The volatility has been produced as fears of production outages in Libya come into focus with fighting in the capital and Iran states that any negotiations between itself, the EU and the U.S. over a proposed revival of the nuclear deal will drag on, at least into next month.
Nine of the 11 S&P sector-select SPDR ETFs shaded red for Monday, after last week's beatdown. Energy ( XLE) outperformed yet again, up 1.51% for the day, and up 4.25% last week. In fact, with the exception of a mid-summer swoon, Energy has been, from a sector-performance perspective, top dog for quite some time, number one of 11 over windows of one month (+7.23%), six months (+21.63%), year to date (+54.68%) and one year (+78.49%).
In fact, Energy is one of three sector SPDRs that currently stands above both its 50-day and 200-day simple moving averages, and at the greatest premium to those averages than any other fund among the 11. 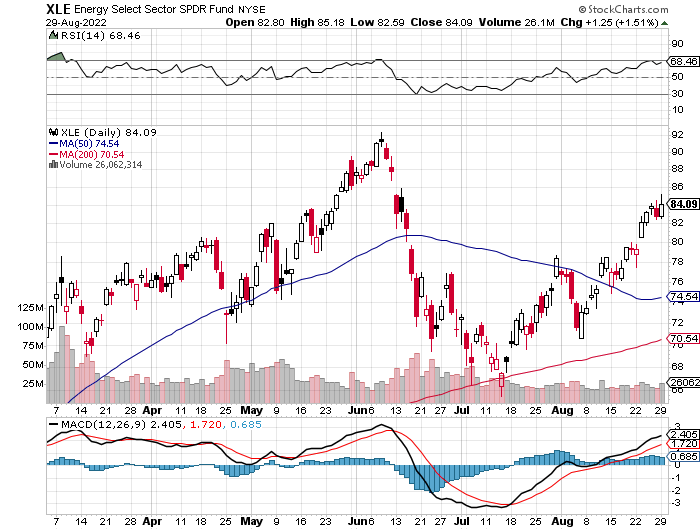 Closing with excellent, but not technically overbought Relative Strength and a daily Moving Average Convergence Divergence (MACD) that just has not quit, the XLE went out at a 12.8% premium to its 50-day line and a 19.2% premium to its 200-day line.
The other two sector SPDRs that can make this claim are both "defensives" and one is hanging by a thread. The Utilities ( XLU) closed 5.2% and 8.1% above its 50-day and 200-day SMAs, respectively, while the Staples ( XLP) made contact with both lines on Monday. And while Staples as a group could find support here, one would have to think that along with Utilities, these two dividend-paying groups will face medium-to long-term competition for investor dollars from fixed-income markets.
Staples also seem a little expensive here, don't you think? Lose those two lines and you lose a chunk of Wall Street's overall support. Of these three sectors, even though global recession looms and that should pressure demand, I think Energy remains the best bet, despite the obvious volatility now inherent across the space.
Personally, I remain long both Chevron ( CVX) and Occidental Petroleum ( OXY) . While I have reduced my book's equity exposure significantly, I have not touched these two. I also have TheStreet's Stocks Under $10 portfolio in Southwestern Energy ( SWN) and Transocean Ltd ( RIG) , which have been two of that portfolio's better performers.

Not hearing either. 3M ( MMM) , which is a member of the Dow Industrials, approached both two-month and 30-month lows on Monday as the firm filed a notice to appeal a judge's decision denying MMM's effort to halt more than 230K lawsuits claiming its earplugs were faulty, according to Bloomberg News. 3M denies that its earplugs are unsafe and may have to spend an estimated $100B defending itself and its bankrupt subsidiary Aearo Technologies going forward. I lost most of my hearing in the military. Every veteran I know has, including my father and one of my sons. Never thought of blaming anyone. 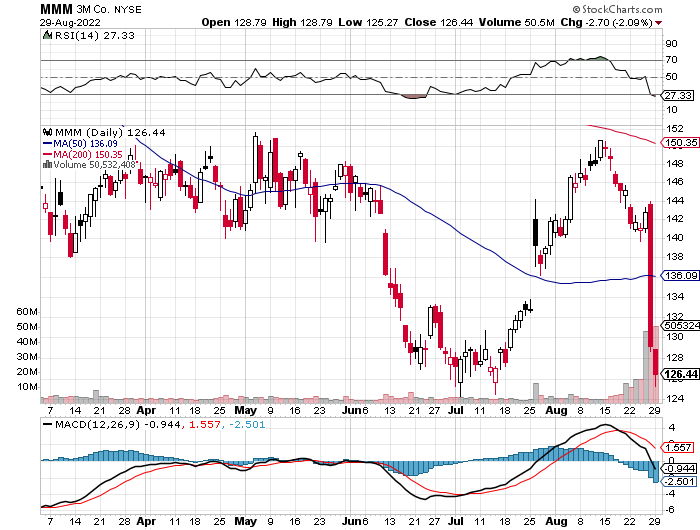 MMM stock trades at 12 times forward-looking earnings and yields 4.7%. Too bad. My feelings? It's very difficult to trade negative news events. Better off, unless one is willing to accept that all bets are just that... speculative and bets, to simply take a pass when running into these kinds of news-driven charts.

I am actually writing this before making any purchases myself, and I promise to wait until after publication to act at all. A name that I missed on the way up and have watched come back in is Belite Bio ( BLTE) . It's a small-cap, only public for a few months. The firm loses money, and provides no products or services currently on the market.
On August 12, BLTE reported a first-half GAAP loss of $0.23 per share on no revenue. The firm did have $48.7M in cash at their disposal as of June 30. What the company has is a product in the pipeline that seems to have potential. That lead asset is LBS-008, which is designed to slow retinal degeneration in age-related macular degeneration and autosomal recessive Stargardt Disease (STGD1), an eye disorder for which there is no current treatment.
LBS-008 is an orally administered tablet currently undergoing simultaneous two-year Phase 2 and Phase 3 trials involving adolescents with STGD1 in the U.S., U.K., and several other nations sprinkled around Europe and Asia. The firm is also expected to launch a Phase 2/3 trial later this year evaluating the potential for this same asset for treatment of the above-mentioned non-neovascular age-related macular degeneration. There are currently no FDA approved therapies for that ailment as well. 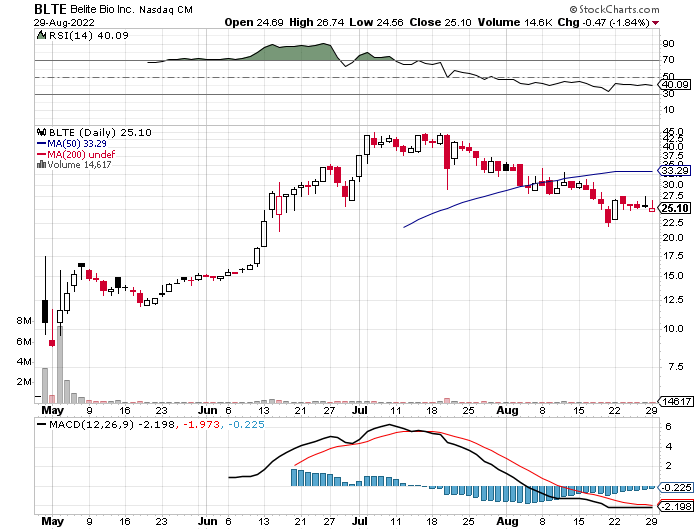 I am thinking of initiating below $25 and trying to scale the name in from there. We'll see.