By STEPHEN GUILFOYLE Sep 29, 2021 | 07:28 AM EDT
Stocks quotes in this article: XLE, XLC, XLK, CTAS, JBL, MLHR, DJP, XLI, MU, SHW, PTON, AMZN, AAPL
Septembers never seem to make this easy. At least next month brings October. Oh, never mind.
October on average does improve for equities from September, which is considered the worst-performing month of the year over a long-term view. However, October, though it only strikes occasionally, can be by far the most volatile. While September is the light on his feet, "quick and smooth" opponent that can hit you with jabs here and there, wherever you're not covered up, it is October that lumbers around eyeing an opportunity to land a knockout blow. At least until perhaps the third or fourth week of the month.
Black Thursday, Oct. 24, 1929, and Black Monday, Oct. 19, 1987 come to mind. Your pal was up to his elbows in alligators for that one. There's also the Oct. 13 mini-crash of 1989. Time has forgotten that one, despite the fact that it probably did cause the recession that turned the elder George Bush into a one-term president. Those of us who spent that day in the thick of it certainly will never forget.
It becomes difficult to illustrate the current financial market trend as anything but pressured, perhaps pressured severely after a second one-sided risk-off market session in the last six impacting almost all markets. Tuesday knocked the S&P 500 for 2.04%, leaving the index 4.2% below its early September highs. Tuesday also smacked the Nasdaq Composite around for 2.83%. The Composite now stands 5.6% off of the all-time high for that index.

The recent action for the S&P 500 shows what now looks like a four-day failure to retake both the 21-day exponential moving average (EMA) and the 50-day simple moving average (SMA) for the broadest large-cap index as red candle days certainly seem to come on higher volume of late than do the white candle days. The same chart for the Nasdaq Composite has a very similar look:

There was very little shelter to be found across the equity landscape as small-to mid-caps were hit just as hard as large-caps. Using sector-select SPDR ETFs as proxies, only Energy ( XLE) shaded green for the day, and up just 0.34% at that, as Brent, WTI, and Natural Gas futures all turned red during the session.
At the bottom of the day's performance tables came the "growthy" sectors -- Communication Services ( XLC) finished 10th of 11 at -2.44% as the Dow Jones U.S. Internet Index (-3.44%) weighed on the sector. Technology ( XLK) occupied the basement (11th) at -2.96%, as the pain was equally split between software and the semiconductors. The Dow Jones U.S. Software index gave up 3.7% on Tuesday, while the Philadelphia Semiconductor Index took a 3.8% haircut.

The impact on equities really could be seen as almost expected given the political environment. Clearly, though, there was more than one catalyst on Tuesday. Markets were weak for hours before the opening bell, and never showed any true signs of life -- at least not until the overnight session, which (it's still the middle of the night for most of you) is at least trying to recover some ground.
Structurally, financial markets weathered a six-basis-point surge in what the U.S. 10-Year Note yields, that was as much as eight bps at the lows of the session. The Treasury Department suffered through a well-below-average auction of $62B worth of seven-year paper Tuesday afternoon.
As the yield spread between what the 3-Month Bill and the 10-Year Note pay did this...

...and the iPath Bloomberg Commodity Index Total Return ETN ( DJP) did this... 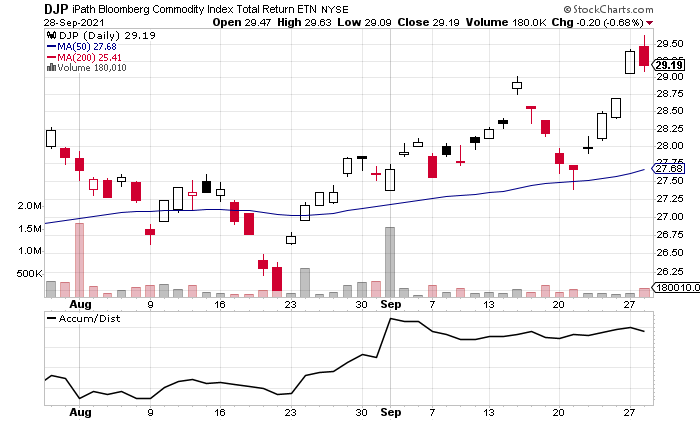 ...equities took it on the chin. Losers beat winners at the NYSE by more than 4 to 1, and at the Nasdaq by more than 9 to 2. Advancing volume defeated advancing volume by a loose 7 to 2 at both exchanges. Aggregate trading volume increased at both exchanges as well.
It is now clear, in a world without all that much clarity, that at least for now, professional money is in the early stages of distribution mode. They are still buying the dips, but they are selling the pops and selling on momentum. I think only a news event could either turn for the better or accelerate (for the worse) this process. (Un)Fortunately, we're sitting on a bevy of potential news events.

Don't blame Treasury Secretary Janet Yellen, She merely told the truth on Tuesday morning as she addressed the Senate Banking Committee.
Yellen said, "It is imperative that Congress address the debt limit. If not, our current estimate is that Treasury will likely exhaust its extraordinary measures by October 18. At that point, we expect Treasury would be left with very limited resources that would be depleted quickly. America would default for the first time in history." Yellen went on, "The full faith and credit of the United States would be impaired, and our country would likely face a financial crisis and economic recession as a result."
About the only mistake Yellen made in telling the truth was to imply to these palookas in our two legislative bodies that she could keep the U.S. out of default for another three weeks.
An almost imminent and temporary government shutdown appears to each major party as a simple tool used to try to manipulate the other. If only (doubt it) Yellen's warning could wake a few of these folks up. On that note, news broke on Tuesday that the extreme left of the Democratic Party majority in the House were planning to vote against the ($550B to $1.2T) bi-partisan infrastructure bill (that has already passed in the Senate) this Thursday in defiance of Speaker Pelosi unless they can be assured that the larger ($3.5T-ish?) socially and climate-based tax-and-spend package were also assured of passage.
At least on Tuesday, cyclicals, especially industrial stocks, reacted to this headline. Note that the Industrial SPDR ETF ( XLI) at -1.16% did outperform broader markets, but this was also supported by strength across a few defense contractors.

In a related matter, Massachusetts Senator Elizabeth Warren called Fed Chair Jerome Powell "a dangerous man to head up the Fed." Warren also stated that she would vote against a second term for Powell, which puts her in direct opposition to Janet Yellen who has already announced her support for Powell. Why does this matter? The Fed Chair serves at the pleasure of the president, but must be confirmed by the Senate.
By making this strictly political at a time that the current administration comes under pressure from all angles for a number of reasons, and at a time where this nation as well as nearly all developed economies are dealing with the unwelcome forces of stagflation (slowed economic growth + higher inflation), Warren throws uncertainty where it does not need to be. Is it grandstanding? Is it an ego-feeding attention grab? I don't know. I would and could not support changing leadership at the central bank at this time, especially since I think Powell has done about as good a job as possible since the start of the pandemic.
While late headlines surrounding certain regional district leadership are not a good look, one must ask for how long and how broad were such practices? One of those rushed retirements had served in that Fed district for 30 years. Do I think Jerome Powell is a dangerous man to head up the Fed? I think he is both cautious and pragmatic. He has shown the ability to be aggressive when required. In short, I think Powell is the best and most effective Fed Chair since at least Paul Volcker, who is "the" Hall of Famer in this space.

Here they come... heading for Wall Street... reductions in guidance because supply chains still aren't unkinked like folks thought they'd be. At last check, FactSet Insight had Q3 (current) quarter earnings growth for the S&P 500 at 27.6% year over year on revenue growth of 14.9%. Last night Micron Technology  ( MU) reported. It all looks great. Top and bottom line beats. Accelerated backward looking growth. Gross margin popped. Operating income increased.
Then it got ugly. Micron reduced guidance significantly for the current quarter, shaving as much as a cool billion dollars off of projected revenue, while knocking between a quarter and a half a buck off of consensus EPS expectations. CEO Sanjay Mehrotra made clear that this is not a demand issue. Micron's customers are adjusting their component purchases based on their ability to overcome "shortages of non-memory components that are needed to complete PC builds."
Wait. There's more. From memory chips to house paint. Sherwin-Williams ( SHW) also spoke up on Tuesday night. The company no longer expects to see necessary supplies increase or the cost of materials subside this year as once projected. For the current quarter, SHW cut EPS guidance to $2.00 to $2.10 (consensus: $2.46), while reducing the full year to $8.35 to $8.55 (consensus: $9.21). Third-quarter sales are now seen as flat to slightly lower, compared to Q3 2020.
Just the beginning of reduced guidance? Staring at the quarter chock full of swings and misses? Too early to tell. Too ominous to ignore.

The Death of Peloton?

Okay, way too early to tell here, too. That said, just a few days ago, I dropped my own Peloton ( PTON) digital subscription. That was prior to Tuesday's Amazon ( AMZN) news. For me, I used Peloton as my back-up digital subscription, it was never my "go-to." The problem was the serious lack of challenging workouts. If you have been a semi-serious athletic type for most of your life, you have to go much harder on Peloton than does the instruction just to get your work in. There are multiple competitors where just keeping up with the instruction is a challenge.
Amazon, as part of their fall product launch event, unveiled health services, including a subscription workout service. You'll recall that Apple ( AAPL) recently went this route as well.
Can Peloton, even with recently reduced prices for the hardware, compete with the likes of Apple and Amazon for the casual fitness minded consumer? I have no idea how Apple and Amazon stack up for serious fitness enthusiasts, but for ease of use, I just don't see how the likes of Peloton can possibly compete with these two giants for the hearts and souls of that consumer who is just trying to get back in shape, but is still not willing to go back to a physical gym.