Selling pressure persisted throughout Thursday session (and into Friday morning) with all charts closing near their intraday lows. Several of the indexes saw their near-term support levels violated again, thus leaving all in near-term downtrends with no technical signals of a reversal at this point.

Meanwhile, the data are lacking strong reversal signals as well, with the bulk of the indicators at neutral levels except for investor sentiment (contrarian indicator) that shows an abundance of bearish expectations.

So, while valuation has come back a bit more in line, there is not enough of a basis from the charts and data to declare the current correction is finished. 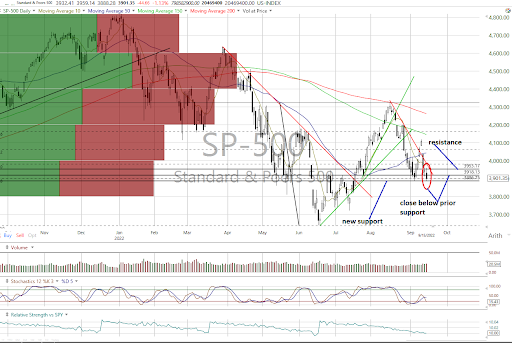 All the major equity indexes closed lower Thursday with negative NYSE and Nasdaq internals as all closed at or near their intraday lows.

Technical damage occurred on the S&P 500 (see above), Nasdaq 100, Dow Jones Transports and Value Line Arithmetic Index as all broke below support, leaving all the charts in near-term downtrends and lacking reversal signals.

More support violations are likely on hand at the open on Friday.

Meanwhile, cumulative market breadth weakened with the advance/decline lines for the All Exchange, NYSE and Nasdaq turning negative and below their 50-day moving averages.

Some stochastic levels are now oversold but have yet to generate bullish crossover signals.

The McClellan Overbought/Oversold Oscillators are mostly neutral with only the NYSE mildly oversold (All Exchange: -37.64 NYSE: -50.69 Nasdaq: -28.23).

The percentage of S&P 500 issues trading above their 50-day moving averages (contrarian indicator) slipped to 32% and remains neutral.

The Open Insider Buy/Sell Ratio ticked up to 49.4% but remains neutral as well.

Also, this week's AAII Bear/Bull Ratio (contrarian indicator) (see below) rose notably to 2.16 and is now on a very bullish signal with bears outnumbering bulls by more than 2:1. 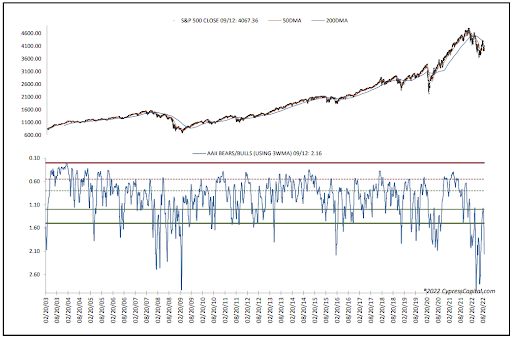 The Investors Intelligence Bear/Bull Ratio (contrary indicator) is 29.7/29.7 and neutral.

The forward 12-month consensus earnings estimate from Bloomberg for the S&P 500 was unchanged at $232.61 per share. As such, its forward P/E multiple dipped to 16.8x and is at a slight premium to the "rule of 20" ballpark fair value at 16.5x.

As much as we would like to say otherwise, the facts are the chart trends and market breadth are negative with only the investor sentiment levels on green lights on the data dashboard. In our opinion, they suggest more patience is necessary before concluding that demand has finally overpowered supply.