And while supports held Wednesday, all the index charts remain in near-term bearish trends and have yet to display any technical signs of imminent reversal.

Meanwhile, most of the data are without definitive suggestions in either direction except for investor sentiment (contrarian indicators) that are at 20 peaks in bearish opinions and thus very positive.

We believe signs of demand taking the upper hand on the charts are necessary to become active on the long side. Those signs have yet to appear.

No Violations of Support on Hot PPI 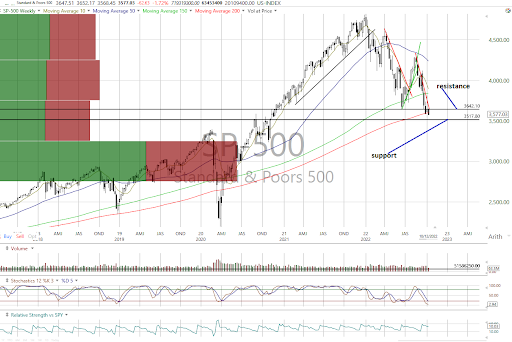 On the charts, the indexes closed mostly lower Wednesday with only the Dow Jones Transports managing to post a gain.

Internals were negative across the board except for positive up/down volume on the Nasdaq. No support levels were violated in response to the higher-than-expected PPI report.

Nonetheless, all remain in near-term downtrends and continue to lack technical signals that would suggest a reversal of the current trends.

Cumulative market breadth remains negative on the All Exchange, NYSE and Nasdaq with all below their 50-day moving averages.

The stochastic readings are oversold on the S&P 500, Nasdaq Composite and Nasdaq 100 but lack bullish crossover signals.

We would also note the VIX is now at a level surpassed only twice over the past 12 months. As such, we believe it implies the potential for a decline in market volatility.

The data find the McClellan Overbought/Oversold Oscillators still in oversold territory on the NYSE with the Nasdaq and All Exchange neutral (All Exchange: -45.67 NYSE: -60.26 Nasdaq: -36.33).

The percentage of S&P 500 issues trading above their 50-day moving averages (contrarian indicator) was unchanged at 11% and remains bullish.

The Open Insider Buy/Sell Ratio rose slightly to 57.8 and neutral.

The detrended Rydex Ratio (contrarian indicator) remains on a very bullish signal but rose to -2.63. The ETF traders continue to have extended leveraged short exposure and, in our opinion, could provide a strong catalyst to the upside when supply/demand starts to shift toward demand taking control.

This week's AAII Bear/Bull Ratio (contrarian indicator) rose to 2.87 and is now at a level of bearish sentiment only surpassed twice in the past two decades, those times being during the banking crisis in 2009 and the COVID pandemic in 2020. 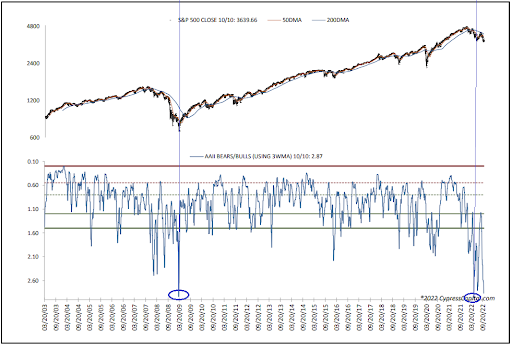 The Investors Intelligence Bear/Bull Ratio (contrary indicator) is 41.8/25.4 and also near peak levels.

We have yet to see signs on the charts that sellers are losing control with buyers starting to take the stronger hand. So, despite the bullish implications from sentiment and valuation, we wait for said signals to appear.

Get an email alert each time I write an article for Real Money. Click the "+Follow" next to my byline to this article.
TAGS: Indexes | Markets | Stocks | Technical Analysis | Treasury Bonds | VIX | U.S. Equity