All the major equity indexes closed lower Thursday, leaving each if the indexes in near-term bearish trends as signals for reversals remain absent.

Meanwhile, some of the data are suggesting a possible pause in weakness for the very near-term. Our net takeaway, however, is that despite somewhat encouraging data while valuation continues to be compressed, the charts and market breadth have yet to show signs that supply has been exhausted to the point that demand can regain control. 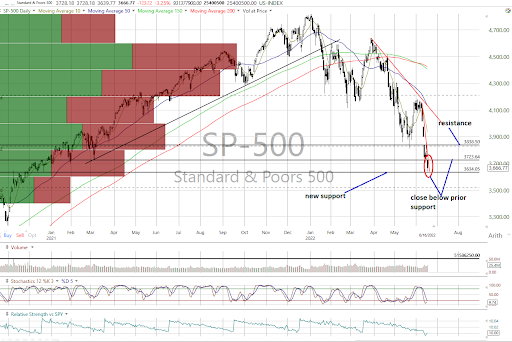 All the major equity indexes closed lower Thursday with very negative breadth as trading volumes grew from the prior session.

Most closed near their intraday lows as the S&P 500 (see above), DJIA, MidCap 400, Russell 2000 and Value Line Arithmetic Index closed below support levels.

Technically, all remain in near-term bearish trends with no evidence yet presented that would imply bullish reversals.

Market cumulative breadth remains bearish on the All Exchange, NYSE and Nasdaq as well.

Stochastic levels are still quite oversold but have yet to generate bullish crossover signals.

We suggest trends should continue to be respected until evidence suggests otherwise.

Let's Look at the Market Data

The McClellan Overbought/Oversold Oscillators are oversold and imply a pause with the NYSE very oversold (All Exchange: -80.3 NYSE: -109.51 Nasdaq: -60.53).

The percentage of S&P 500 issues trading above their 50-day moving averages (contrarian indicator) dropped to 2% and well below the 25% trigger line, remaining bullish.

The Open Insider Buy/Sell Ratio increased to 96.9 from 84.0 as insiders continued their recent buying, but remains neutral.

On the other hand, the detrended Rydex Ratio (contrarian indicator) dropped to a very bullish -2.77 as the leveraged ETF traders are highly leveraged short. 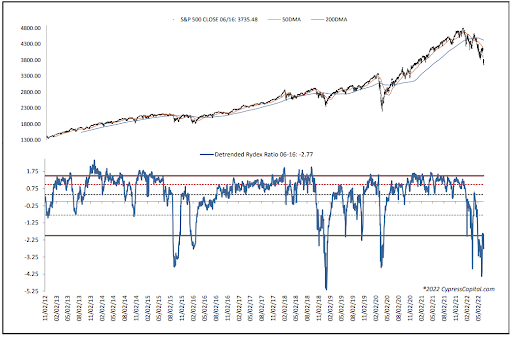 The Investors Intelligence Bear/Bull Ratio (contrary indicator) also remained on a very bullish signal and still near a decade peak of fear at 40.0/35.72. Such extreme levels of investor fear have typically presaged notable market rallies.

While valuation and investor sentiment are on green lights, that has been the case of late even as the markets have continued to suffer. In our view, we need to see signs of a shift in the supply/demand equation via the charts and breadth before becoming more confident that a bottom has been established.