The major equity indexes closed mostly higher Friday with only two posting minor losses as all closed near their intraday highs. However, internals were split with the NYSE's positive and the NASDAQ's negative.

The only technical event of note, however, was the S&P 500 closing above resistance while the resistance levels on the remainder of the charts remain intact.

Meanwhile the data, in our opinion, continues to imply the markets may likely stay in a period of consolidation from their recent nearly vertical gains from the middle of the month. Also, the valuation gap has widened a bit given the recent rise in the 10-Year Treasury yield. 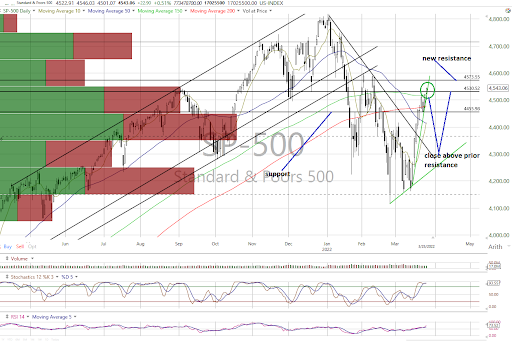 The Nasdaq Composite and Nasdaq 100 closed slightly lower Friday as the rest of the indexes posted gains.

While the NYSE saw positive internals on higher volume, the Nasdaq internals were negative as trading volumes rose there as well.

All the indexes closed near their highs of the day with the only technical event of note being the S&P 500 (see above) closing above near-term resistance as the resistance levels of the rest of the indexes remain intact.

The nearly vertical and sizable gains on the indexes post their March 14 lows suggest to us that a period of some consolidation remains most likely, as is typically the case when charts have sizable and rapid moves to high volume resistance levels.

The cumulative advance/decline lines for the All Exchange, NYSE and Nasdaq remain positive but below their 50-day moving averages.

Regarding stochastic readings, the Russell 2000 registered a bearish stochastic crossover as the rest are still overbought.

The percentage of S&P 500 issues trading above their 50-day moving averages (contrarian indicator) rose to 60% and remains neutral.

The forward 12-month consensus earnings estimate from Bloomberg for the S&P 500 has increased to $228.05 per share. As such, the S&P's forward P/E multiple rose to 19.9x with the "rule of 20" finding ballpark fair value dipping to 17.7x as the valuation gap widened.

While the S&P 500 violated resistance Friday, the McClellan OB/OS oscillators and stochastic levels suggest some caution going forward while very bearish investor sentiment remains a counterbalance. We continue to suspect some further consolidation of gains may be the most probable near-term outcome.