By STEPHEN GUILFOYLE Jan 24, 2023 | 07:27 AM EST
Stocks quotes in this article: MMM, DHI, DHR, GE, HAL, JNJ, LMT, RTX, TRV, UNP, VZ, COF, MSFT, TXN, XLK, AMD, WDC, NVDA, ON, QCOM, SWKS, ADI, LRCX, KLAC, NXPI, AMZN, GOOGL, META
Perhaps the most surprising aspect of Monday's risk-on move for equities was the intensity. Pure aggression.
Though this is a heavy week of corporate earnings, there were no headline-level results released on Monday. This action came on top of Friday's risk-on action that took some significance out of last week's midweek selloff.
So, the action came ahead of the vast majority of this week's earnings releases, and ahead of this week's notable macroeconomic releases. Was that simply traders (algos) trading? Or perhaps something more meaningful? The earnings do get hot this morning, while the macro will not heat up until Thursday.
That said, the Fed has been neatly tucked inside their sound-proof room until their decision next Wednesday, the U.S. dollar held its ground on Monday and U.S. Treasuries suffered some mild selling.  They came early, held up the intensity through midday, allowed some early afternoon pressure, and then bought that minor dip.
Just what gives?

What did "they" know ahead of the bulk of this week's earnings and macro?
Why would "they" buy the Nasdaq Composite up 2.01%? Why would they buy the Philadelphia Semiconductor Index up a whopping 5.01%? Why would they take all 11 sector-select SPDR ETFs into the green for the session, with five of them gaining at least 1%?
About those semiconductors... As a group the semis took the Technology SPDR ( XLK) up 2.28% despite the "pedestrian" 1.61% gain made by the Dow Jones US Software Index. Advanced Micro Devices ( AMD) at +9.26%, was the top-performing stock in the S&P 500, with Western Digital ( WDC) , Nvidia ( NVDA) , On Semiconductor ( ON) and Qualcomm ( QCOM) all also finding homes in the top 10 for that index. The S&P 500 itself gained 1.19% on Monday.
The story there was the action taken by Barclays on Monday morning, or more specifically by Barclays analyst Blayne Curtis, who is not just rated five stars by TipRanks, but an extremely high five-star. In fact, TipRanks places Curtis in the top 0.76% (yes, that's less than 1%) of all of their rated analysts. For what it's worth, TipRanks rates 8,291 sell-side analysts.
What happened was that in the Barclays earnings preview and outlook for 2023, Curtis upgraded Advanced Micro Devices, Qualcomm and Skyworks Solutions ( SWKS) to "Overweight" from "Neutral." Curtis took his price target for Sarge-fave AMD to $85 from $70 and his target for QCOM to $150 from $120. Curtis also reiterated an "Overweight" rating on fellow Sarge-name Nvidia, while increasing his target there to $250 from $170.
Curtis sees generative artificial intelligence such as ChatGPT as supportive to a broader corporate need to upgrade data centers that will now face increased power requirements. Both AMD and Nvidia are uniquely situated to meet this suddenly increased need. Nvidia is set to release a superchip that combines CPU and GPU capabilities at some point, probably during the second quarter of the year, while AMD plans to release a competitor to that chip prior to year's end.
Is Curtis just a "chips" bull? No. Interestingly, Curtis reiterated "equal weight" ratings, which we consider to be "hold-equivalent," for Analog Devices ( ADI) , Lam Research ( LRCX) , KLA Corp. ( KLAC) , and NXP Semiconductors ( NXPI) , all with price targets below the last sale for those stocks.

The tech sector was also pushed higher on Monday by the news that Microsoft ( MSFT) was investing an additional $10B in OpenAI, after having already made investments in 2019 and 2021. OpenAI is the business whose artificial intelligence tool ChatGPT has set the internet on fire, gaining more than a million users since launching in November.
There is clearly a fistfight, or a land-grab if you will, for ever-higher levels of artificial intelligence going on between Microsoft, Amazon ( AMZN) , Alphabet ( GOOGL) and Meta Platforms ( META) , and ChatGPT is the latest and greatest fast-growing offering that can generate text, and images in response to short prompts.
What OpenAI gets out of the deal besides funding, is access to Microsoft's cloud-computing power to help intake volumes of data and then run highly complex models that then allow the program to quickly generate incredibly human-like conversational output.
Microsoft plans to add ChatGPT to Azure and make it broadly available an Azure OpenAI Service. This service will give the firm's cloud customers access to various OpenAI tools such as the language system that ChatGPT is based on as well as the program that generates images from those short prompts. This will enable clients of Azure to use these products in the running of their own applications running in Microsoft's cloud.
Microsoft is set to report its fiscal second-quarter results this evening. Consensus view is for adjusted EPS of $2.31 on revenue of $53B, which would compare to $2.48 on $51.73B for the year-ago period. We already know that Microsoft has finally hit some speed bumps and announced layoffs of some 10K individuals. I would expect CEO Satya Nadella tonight to focus on this as well as Azure, where we need to see growth exceeding 37%, and this investment in and integration of the tools of OpenAI.
Is this the beginning of the end for content creators? Or anyone who uses their brains to eke out a living? I hope not.

It becomes more difficult to doubt this rally by the day. Still, I remember very tough Februarys that have followed strong Januarys. Not that I am rooting against this market. Not in the least.
Could I be more heavily invested? Yes. Am I still holding back? Admittedly, the yields currently being dished out by T-Bills make holding cash much more palatable, and of course, I am still decisively net-long equities.
To say that this early 2023 price discovery has not surprised me though, would be to lie. It has. Remember, we trust ourselves, but we are always open to the possibility that we are not correct, and we always respect price.
On Monday, winners beat losers by roughly 5 to 2 at the NYSE and by about 7 to 4 at the Nasdaq. Advancing volume took a 73.8% share of composite NYSE trade and a whopping 83.8% share of that metric for Nasdaq listings.
Aggregate trading volume increased day over day for names listed at the Nasdaq Market Site and has continued to be higher on "up" days than on "down" days across the Nasdaq Composite all year (so far).
That said, aggregate trading volume actually contracted on Monday from Friday for names listed at the NYSE, and has been much less convincingly optimistic across the S&P 500 for 2023 to date. 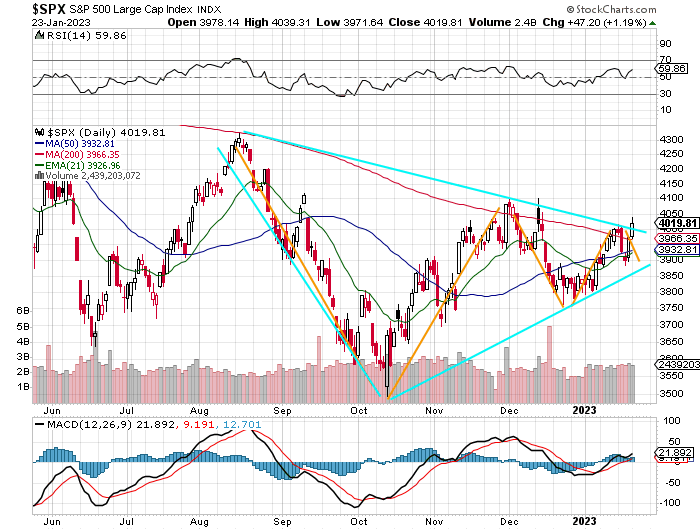 That said, readers will note that the S&P 500 made use of its 200-day simple moving average (SMA) as support on Monday and stretched the limits of our running triangle (which is bearish) to the point where the triangle almost needs to see some downside price discovery on the hop in order to remain valid. 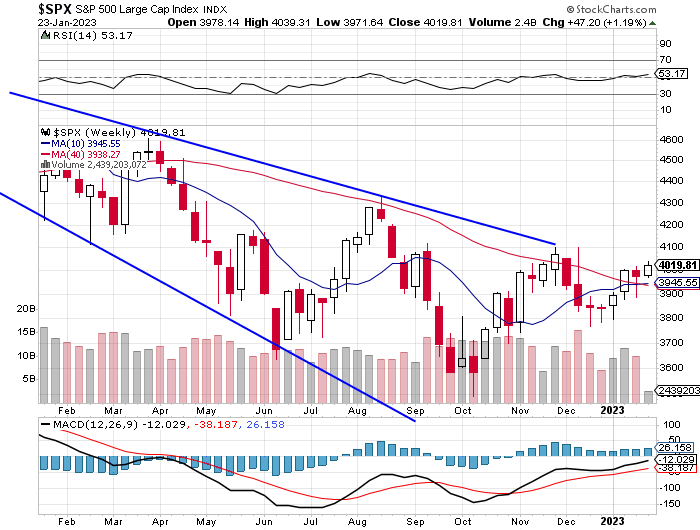 Still, while the S&P 500's 50-day SMA remains well below its 200-day SMA, by switching to the weekly chart, above, readers will see that the 10-week moving average has crossed over the 40-week moving average, which could be seen as predictive of a "golden cross" in the short term.